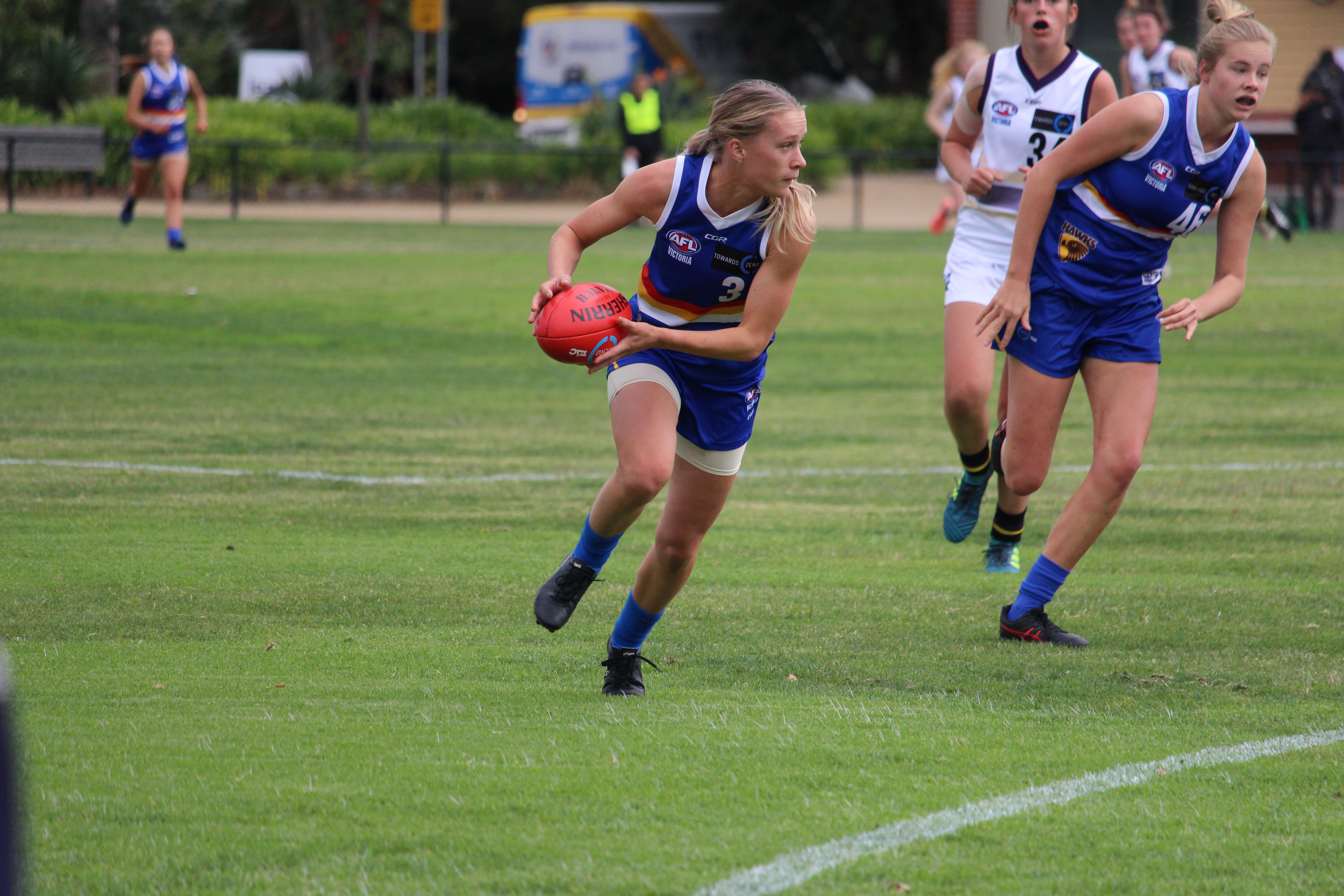 A host of TAC Cup Girls will make their Victorian Football League (VFL) Women’s debut this week, as they prepare for the AFL Women’s National Under 18 Championships commencing on July 9. A couple of traditional rivals will go head-to-head this weekend as well with both Carlton and Collingwood and Hawthorn and Essendon battling it out for a round seven victory.

The Southern Saints will have to fight hard to get back on the winner’s list this week as they face the undefeated NT Thunder this Saturday. Sandringham Dragons duo, Eleanor Brown and Jemma Owen will retake to the field this week after representing Vic Metro in the AFL Women’s National Under 18 Championships. They have been named in alongside Carlton AFLW player, Laura Attard, Eastern Ranges pair, Gabriella De Angelis and Charlotte Wilson as well as Dandenong Stingrays duo, Shelley Heath and Courtney Jones.

NT Thunder have made 11 changes with lots of Northern Territory talent being re-injected into the side. Tabitha May will be making her senior debut this week after being named most valuable player in round one of the AFL Women’s National Under 18 Championships. Coming back to the side will be defenders, Tahlia Holtze, Jemma Iacono, Morgan Johnstonand Lisa Roberts. Similarly, Jasmine Anderson, Lucy Adam and ruck, Jess Allan will be welcomed back into the midfield. For the forward line, the skillful Jasmyn Hewett will return from rest alongside Jordann Hickey and Ruth Wallace. However, the Thunder has rested AFLW Adelaide Crows stars, Sophie Armitstead, Georgia Bevan, Courtney Cramey, Chelsea Randall, Deni Varnhagen, Jenna McCormick and Sally Riley in line with an AFL Victoria directive to reduce the number of South Australian-based players in the team each week. Madeline Gault, Sue Nalder and Kristy Irvine will also miss this week’s match up.

Collingwood will be coming off a week’s rest when it takes on Carlton at Warrawee Park this weekend. The Magpies have made four key changes to their line-up, bringing in AFLW talents, Ruby Schleicher, Kristy Stratton and Emma Grant. Leah French will also join the side this week, while Mua Laloifi, Gabrielle Biedenweg-Webster, Sarah Cameron and AFLW player, Holly Whitford have been named out. Oakleigh Chargers forward, Daisy Bateman comes back into the side as the 23rd player after scoring three goals on debut for the Magpies.

Carlton has made five changes in the lead up to this week’s match, starting with the exciting inclusion of this year’s TAC Cup Girls Northern Knights captain, Maddy Brancatisano. She will come in as the 23rd player and bring her leadership experience after leading her side to the inaugural TAC Cup Girls Grand Final. She will be joined by another TAC Cup Girls leader in Gippsland co-captain, Tyla Hanks, who was one of the best on ground for Vic Country in its first Nationals hit-out. Carlton AFLW players, Natalie Plane and Bridie Kennedy have also been named to take the field this week, as well as sister of Breann Moody, Celine Moody. They will have big shoes to fill with AFLW teammates, Jess Hosking and Sophie Li being rested. Oakleigh Chargers forward, Isabella Gietzmann and Rachel King have been omitted while Courtney Bromage has shifted her focus from football back to her studies for the remainder of the season.

Both the Casey Demons and Western Bulldogs come into round seven with one win under their belt and hungry for more. Coming off last week’s bye, the Demons have brought in AFLW players, Laura Duryea and Kate Hore, Bianca Jakobsson and Katherine Smith. They will be joined by Dandenong Stingrays and Vic Country captain, Jordyn Allen, as well as Taylor Mesiti and Sally Fyfield. This week the Demons also signed Shae Sloane, sister of Rory Sloane, who will don the red and blue jumper for the first time this weekend as the 23rd player. The former Volleyroos captain is an exciting addition to the team.

Coming off their first win of the season, the Bulldogs have pulled the ace from their sleeve this week, bringing in AFLW premiership captain, Ellie Blackburn for her VFLW debut. She will be joined by another debutant in AFLW premiership forward, Deanna Berry. Both girls are no stranger to a tough game of football and are sure to add class to the Dogs’ line-up. Laura Bailey, Nicole Paul, Brittney Wunhym and Katerina Rebuffo have also been named in for the round seven clash.

Melbourne Uni will go into this week’s clash against Darebin missing two Kangaroo recruits, Jamie Stanton and Danielle Hardiman. Marta Cantwell has also been named out. In their place, Vic Metro captain, Madison Prespakis will be welcomed back to the field alongside the fearless Sophie Abbatangelo, Asha Price, Alexandra Saundry, Candice Adams and Lauren Munday.

Darebin has made six changes to its round seven side. This involves the inclusion of AFLW player, Nicole Callinan as well as Cherelle Byrne, Janelle Bertoni, Shree Fairchild and Eastern Ranges and Vic Metro defender, Lauren Szigeti who comes in as the 23rd player. The Falcons will be going into the game without powerhouse, Lily Mithen, who is a former captain of Vic Country, and Melbourne AFLW player. Fellow AFLW midfielder, Nat Exon is another big out for the Falcons this week.

Hawthorn will be looking for repeat efforts of last weekend when it takes on the winless Essendon. They have brought in two debutants for the occasion, including Eastern Ranges duo, Emerson Woods and Mikala Cann. Both girls have proven to be tough competitors after their TAC Cup Girls experience this year. Clare O’Donnell and Nicky Cormack have had to make way for the young midfielders.

Yet to experience victory, Essendon will be desperate for a win, coming off the bye. The Bombers have trusted in three debutants to bring them the result they desire. Greater Western Sydney defender, Tanya Hetherington and 17-year-old Calder Cannons defender, Molly Warburton will hopefully bolster the Dons’ defensive pressure. Another 17-year-old Cannons recruit, Carla Rendelmann will also play her first game, being named as the 23rd player. Aysha Ward and Monique DeMatteo have also been named in while Jessica Anwyl, Danielle Ponter, Alex Quigley, Jenna Barker and Erin Bult have been named out.