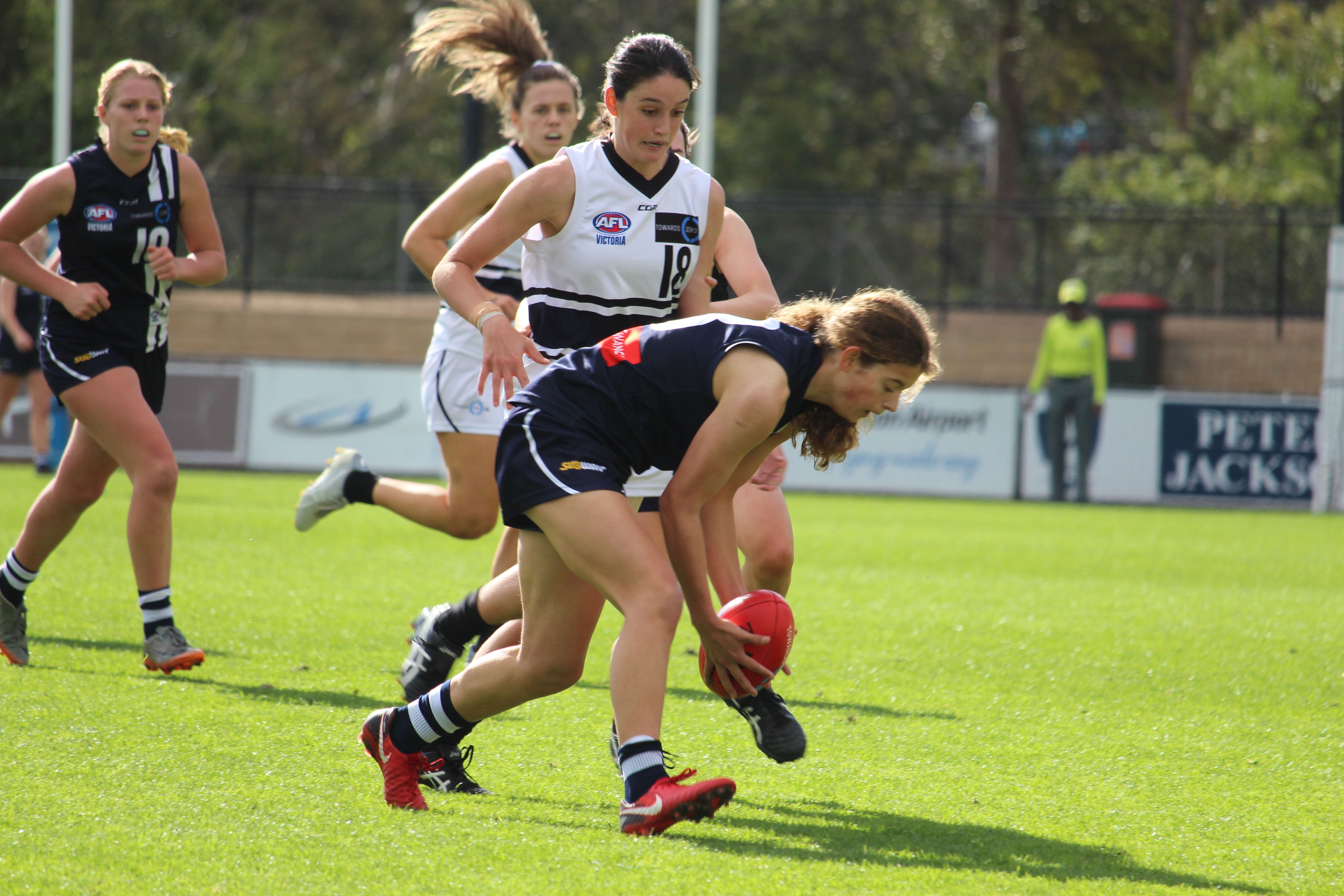 AS the home and away season begins to wind up, many teams are starting to settle their weekly changes. However, some vital changes are still being made going into Round 14, particularly in arguably the biggest clash of the weekend, when the two ladder-leaders, Collingwood and the NT Thunder go head to head. All in all, Round 14 is shaping up to be another exciting round for the Victorian Football League (VFL) Women’s Competition.

Round 14 kicks off at Casey Fields with the Casey Demons taking on Melbourne University. Coming off a strong Round 13 performance, the Demons have kept changes to a minimum, bringing in three players. Former Vic Country skipper, Darcy Guttridge will be a welcome addition to the team alongside Jemma Turner and debutant, Amy Dunn. The Gippsland Power co-captain, who is currently balancing Year 12 and her football career, will be an exciting addition to the Demons’ side and comes in as the 23rd player this week. Gippsland teammate, Emily Haeusler and AFLW forward, Aliesha Newman have been named out.

Returning from their Round 13 bye, the Mugars will be hoping to secure a few more wins before the season’s end. For the occasion, they have made six changes, swapping out star player, Emma Kearney for her 2019 North Melbourne AFLW teammates, Danielle Hardiman and Sophie Abbatangelo. Alexandra Saundry, Clara Fitzpatrick, Tasmanian Under 18s representative, Libby Haines and Vic Country Under-18 representative, Rebecca Webster have also been selected to play.

Collingwood has made 10 team changes ahead of its important clash against the NT Thunder this week. With the home ground advantage on their side and top spot up for grabs, the Pies have made plenty of changes to suit. AFLW duo, Eliza Hynes and Nicole Hildebrand have been named to take to the field amongst many others. Grace Buchan, Katelyn Lee, Stacey Livingstone, Paige Nash, Shayla Marsh, Nicole Hales and Gippsland Power ruck, Jasmine Ferguson have also all been selected to play. Coming in as the 23rd player, Vic Metro midfielder, Katie Lynch has also been named, in what will be her debut performance.

The Thunder, desperate to clinch top spot this week, has followed suit with Collingwood, making plenty of changes ahead of the big game. Classy goal kicker, Sue Nalder has been named back in the side this week alongside Ebony Marinoff, Kylie Duggan, Sharona Bishop and Gemma Cusack. While the Thunder have been renowned for its numerous changes each week, they will now be looking to settle as finals approach, finalising this week’s team with the addition of Adelaide AFLW duo, Jenna McCormick and Justine Mules as well as Central Allies Under 18s representative, Madeline Gault.

Backing up last week’s strong performance against Hawthorn, Darebin has only made one key change for Round 14. The Falcons have selected the prolific Stephanie Smith to take to the field and help them get across the line, while Vic Metro defender, Lauren Szigeti has been named out.

The Southern Saints have also made very few changes this week, bringing in two players. Meghan McDonald and AFL Women’s Academy member, Courtney Jones have both been selected to play in place of Vic Metro representative, Gabriella De Angelis. Jones comes into the side fresh off a Herald Sun Shield Grand Final win so she could be a key player at Bill Lawry Oval.

Geelong, who currently sits fourth on the ladder, will be in desperate need of a repeat performance of last week in Round 14. Ahead of the game, the Cats have made four changes, bringing in Laura Taylor and Isabel Currenti. Geelong has also selected two debutants for the match in Vic Country duo, Nina Morrison and Olivia Purcell. The pair impressed in this year’s TAC Cup Girls competition as part of the Geelong Falcons’ premiership team, and will look to continue to impress when they take to the field this weekend. Morrison in particular will be one to watch, as she was awarded the equal Most Valuable Player (MVP) in the recent AFL Women’s Under 18 Championships, so she will be a key addition against the Bombers.

Essendon has kept changes to a minimum this week, bringing in three inclusions. Erin Bult, Carlee Portlock and Alex Quigley have all been named while Alexa Madden has been called to the sidelines.

After a disappointing loss last week to the Geelong Cats, The Tigers will be looking to redeem themselves when they come up against Williamstown this weekend. They have named four inclusions for the match, headlined by AFLW talents, Christina Bernardi and Lauren Tesoriero, who should bring some stability and experience back to the side. Jenna Colwell and Ruby Edmeades have also been named in while Emma Gunn, Grace Egan and Gabrielle Deller will miss the clash.

Williamstown has also made four changes to its Round 14 side. The Seagulls have fielded two debutants for the match in Melton Centrals junior, Rachael Jackson and Western Jet, Emily Gardner. The pair will be joined by Jasmine Garnerand Emily Paterno, who have also been named in. On the other hand, Rachel Achampong, Erin Meade, Jess Bartoloand Maddy James have come out of the squad.

The Hawks will be glad to have their captain back this week after their narrow loss to Darebin last weekend. Emma Mackie has been selected to play alongside Dianna Haines, who make up only two inclusions this week as Hawthorn try to settle its line-up as finals approach. AFLW talents, Melissa Kuys and Pepa Randall have been named out.

The Western Bulldogs have called upon assistant coach, Bree White to take to the field this week as part of a series of changes to their Round 14 side. Bailey Hunt, Kirsten McLeod, Amanda Tessari, Deanna Berry and Tiarna Ernst have all been named in this week as well as Western Bulldogs AFLW premiership player, Bonnie Toogood. Toogood will make her VFLW debut this week and is sure to be a key asset to the Dogs’ game play.