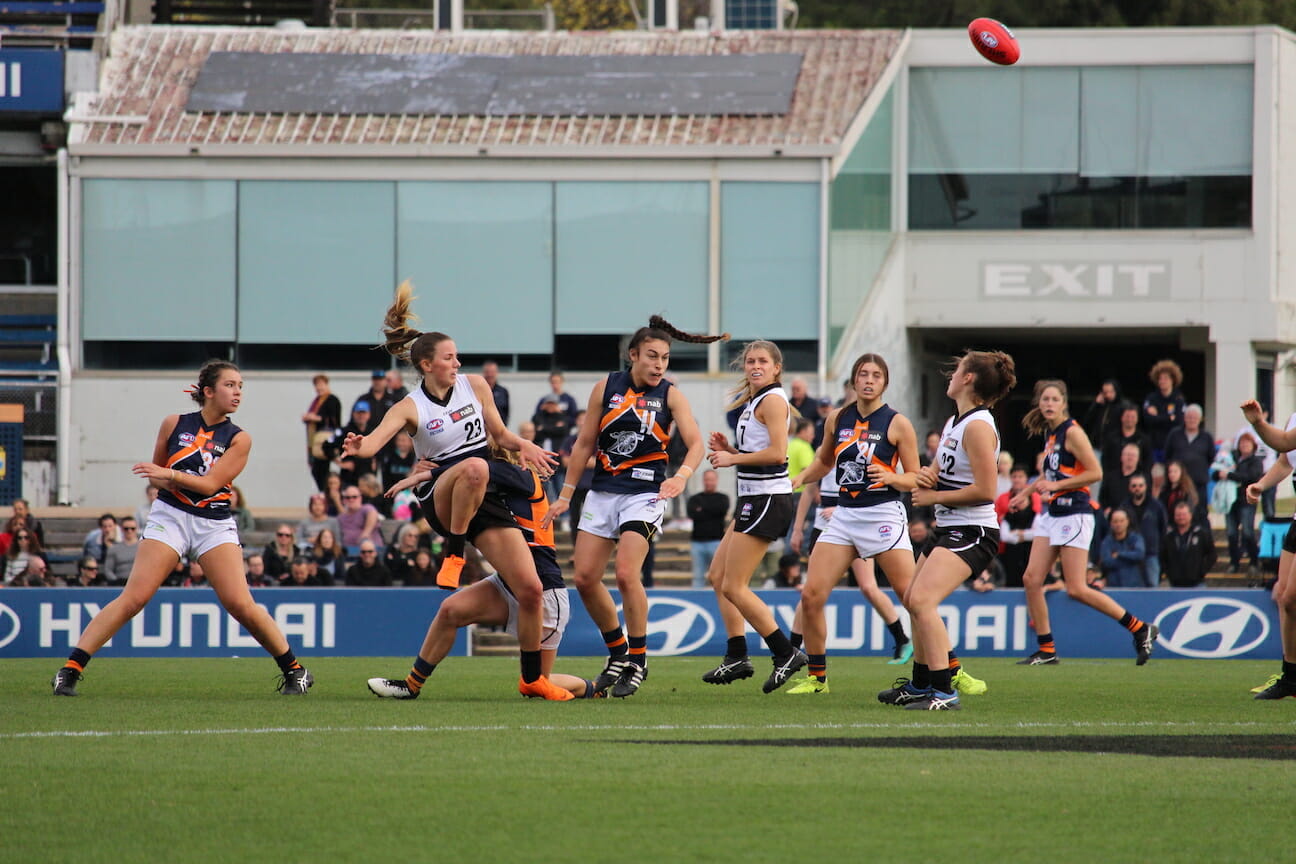 There was plenty of talent on show in the midfield, including Northern captain, Gabby Newton.

COLLINGWOOD Magpies found themselves with a second consecutive minor premiership in Round 16 of VFL Women’s, leaping the Southern Saints and allowing Geelong to jump into the top six for the first time this season for the last finals spot. Meanwhile, Richmond beat the highly touted Saints and Essendon slaughtered the lowly Williamstown Seagulls in a win that came too little, too late.

Essendon made it back-to-back wins to close out the season after thrashing Williamstown by 77 points at Windy Hill. The Bombers restricted the Seagulls to a solitary behind for the match, piling on 11 goals from 23 scoring shots on their way to their biggest win of the season. It meant they improved from their one-win season last year to now sit ninth on the table with six wins from 14 games. Under-18 talent Georgia Patrikios topped the disposal count with 22, while Lauren Ahrens picked up 20 disposals, four marks and four tackles. Georgia Nanscawen (17 disposals, three marks and six tackles) was again prominent onball, while Calder Cannons young gun Krstel Petrevski had 16 touches, three marks, two tackles and a goal. For the Seagulls, Danica Pedersen was a clear standout with 26 touches, while Sharnie Whiting (14 disposals, two marks and three tackles) and Jasmine Kawa (11 disposals, four marks and four tackles) were the others to reach double figures. Williamstown finished the season with the one win from 14 games, just behind Carlton on the table.

The Western Bulldogs showed why they sit third on the table heading into finals after seeing off Darebin Falcons in a 15-point victory. Darebin burst out of the blocks to lead by 17 points at quarter time, but the Bulldogs took control after that, booting 5.6 to 0.4 in the remaining three quarters to secure the 5.8 (38) to 3.5 (23) win. Ellie Gavalas earned 20 touches for the Dogs while laying five tackles, while Emma Mackay (15 disposals, two marks and four tackles) and Danielle Marshall (15 disposals, six marks, five tackles, four hitouts and one goal) were also influential in the win. Under-18 stars Ella Wood (13 disposals, two tackles and a goal) and Elisabeth Georgostathis (10 disposals, two marks and six tackles) again looked like they belonged, while the experienced head of Hayley Wildes (13 disposals, three marks and one tackle) was important. For the Falcons, Kathleen Roe stood tall with 22 disposals, two marks, five tackles and a goal, as Annalyse Lister (20 disposals, 10 tackles) was fierce around the stoppages, and Lauren Arnell (21 disposals, three marks) showed off all of her AFLW experience. Northern Knights’ duo Nell Morris-Dalton and Sarah Sansonetti also looked strong in the game.

Collingwood regained top spot on the VFLW ladder, taking home its second successive minor premiership in the process after downing Hawthorn by 14 points at Box Hill City Oval. The Magpies knocked the Hawks out of the finals race with the result, as the Pies now prepare for the Southern Saints next weekend. The return of Collingwood’s experience was crucial in the 7.4 (46) to 4.8 (32) victory, as competition leading goalkicker Jaimee Lambert booted a goal from 17 touches, five marks and 11 tackles to take out the award, while Brittany Bonnici returned to rack up a team-high 19 disposals and lay three tackles. Grace Buchan (18 disposals, four marks and four tackles) and Sarah Dargan (18 disposals, one mark and one tackle) were busy around the ground, while Maddie Shevlin and Katelyn Lee were the multiple goalkickers for the Pies. Rebecca Beeson was the Hawks’ biggest ball winner with 19 disposals, one mark and eight tackles, while Georgia Bevan (16 disposals, seven tackles) and Rosie Dillon (16 disposals, five tackles) won plenty of the ball. Up forward, Sarah Perkins booted three of the Hawks’ four goals and clunked four marks from 11 touches, while Lou Wotton and Tamara Luke were strong through the ruck, combining for 38 hitouts from 19 disposals.

The Southern Saints were knocked out of top spot in the final round of the season after finally taking the lead last round, going down by one goal to Richmond in what could potentially be a finals match up. While the Saints have had a mostly unblemished season, the Tigers have had a couple sloppy weeks so were well and truly ready to come out and prove themselves against the top side. With a 10-point lead at the final break it seemed that Saints had control after a see-sawing first half, before a dominant final stanza from the Tigers saw the Saints go scoreless to finish the match. For Richmond, Monique Conti found plenty of the footy with 23 touches to lead the Tiger’s disposal count, also collecting one goal and five tackles while the likes of Grace Egan (17 disposals, nine tackles) and Sabrina Frederick (two goals from five kicks) also had some good form in what could have been their final match of the year. For the Saints, Cat Philips racked up 17 disposals, providing a solid option moving the ball up the field but to no avail with little other players able to have an impact. Samantha Johnson (10 disposals, eight tackles) and Tilly Lucas-Rodd (12 disposals, six tackles) were named among the best with four individual goalkickers thanks to the pressing defensive pressure of the Tigers, limiting regular Saints goalkickers to low impact possessions.

In a match that went vastly different to their reverse fixture back in Round 8, Geelong well and truly pushed for their last ditch effort of finals contention, defeating the Blues by 33 points and jumping the Hawks to land themselves in sixth. While Carlton have put up some solid performances this season to contend with quality teams, they couldn’t compete with the Cats on a mission, only putting two goals on the board to finish their season second from the bottom. While the Cats took an early lead Carlton still looked like they were in it, kicking two goals to Geelong’s four in the first half, however were unable to compete in the second half conceding three goals and only kicking three behinds. Rene Caris impressed in the ruck, collecting 30 hitouts and 17 disposals while sharing the load with Kate Darby (12 hitouts, 11 disposals, one goal). Jordan Ivey and Renee Garing collected 25 and 24 disposals respectively, with Ivey kicking her fourth goal of the season while Garing managed 12 tackles to apply plenty of pressure on the Blues. Georgia Clarke was a big target forward in a solid outing, kicking three goals from eight touches while 18-year-old Lucy McEvoy collected 18 disposals and five tackles in her first win at the Cats. For the Blues, Jess Hosking and Sarah Wright were among the best around the ground, collecting 19 touches apiece and a combined 11 marks and eight tackles. Also impressive was young gun Gabby Newton (17 disposals, 15 tackles), while Mia-Rae Clifford (one goal, seven tackles) and Britney Gutknecht (nine touches, six tackles) applied valuable pressure on and around the ball.

Melbourne Uni well and truly finished their season on a high, defeating NT Thunder by 17 points despite a mostly inaccurate affair. While Uni put plenty of goals on the board after taking control early in the second half, their kicking in front of goal left something to be desired with the likes of Katie Angelis kicking 1.4 from her nine kicks and six marks. While Thunder took advantage of their opportunities in front of goal, applying scoreboard pressure in every quarter bar the first, their chances were limited thanks to the defensive pressure of the Mugars on the brink of finals. Emma Kearney (29 disposals, six tackles, one goal) and Sophie Abbatangelo (27 disposals, 10 marks, five tackles, two goals) starred for Uni, while Vivien Saad was solid in the ruck with 29 hitouts, finding her teammates with ease as they dominated stoppages. Kate Gillespie-Jones was consistent as ever with 24 touches, nine marks and eight tackles. For Thunder, Stevie-Lee Thompson put in the hard yards with 22 touches, four marks and two behinds, attempting to push forward to create opportunities forward while Deni Varnhagen did a wealth of work behind the ball to finish with 27 disposals and five marks. Meanwhile, young gun Danielle Ponter kicked two of Thunder’s four goals, providing a solid target forward collecting 14 touches and three marks.