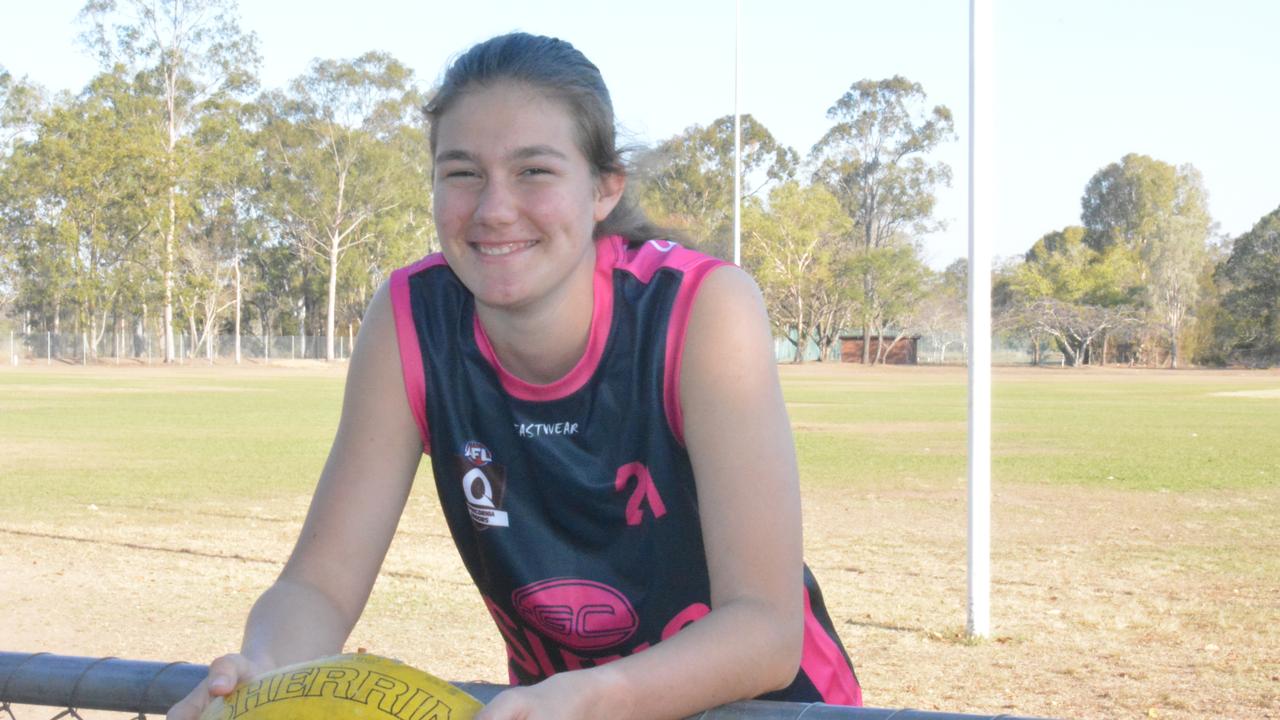 AS the postponement of all seasons commenced over the last week, we head back to the pre-season where we chatted to a number of athletes across the country. In a special Question and Answer (Q&A) feature, Draft Central‘s Taylah Melki chatted with Queensland’s Sophie Ure at the state testing day hosted by Rookie Me.

TM: Sophie, how did you get into football?

SU: “All my family has been involved in it and I’ve just played it since primary school, so it’s just been a big part of my life.”

You didn’t really have a choice?

“Well I was always there. I thought it looked fun so I may as well join in.”

What is it that you love about footy?

“Just the people around it. Everyone’s so genuine and nice and everyone’s there for each other, trying to make everyone better.”

How are you finding being part of the Gold Coast SUNS Academy?

“I’m really enjoying it. Especially over the summer, it’s helping me to keep on improving my fitness. I’m from up North so it’s a bit smaller up there, but it’s still really good – good coaches.”

How different is it from your experience up North?

“There’s definitely a lot more boys up there, especially from my region so I’m a bit isolated from the girls in the academy sense but it’s still good to see what you’re up against and see how you can improve just from watching the boys.”

How old were you when you started playing?

“(I started at) AusKick when I was about five or six, and then played Under 9s.”

So did you play mostly against boys back then?

“Yes. I played with and against boys until I was 14, then I only played women’s in the last two or three years.”

How have you found that change?

“Playing with boys definitely helped improve my skills more. I had to be better to actually get a kick, so I feel like when I moved over to women’s, it was a bit less about your skills and more about how hard you can hit.”

Is there a particular area you’re looking to improve on this season?

“Probably my tackling and defensive pressure… I’m not the most solid person so I want to try and get a bit more involved with tackling pressure so I have a presence.”

And what do you see as your strengths on the field?

“I don’t reckon my kicking is too bad. But I haven’t really compared it to people down here.”

“Just to get as far as I can with my footy, whether that’s just the academy, the Under 18 team, or whatever happens.”

How have you been travel-wise over the journey?

“It definitely is a lot balancing all the footy on top of Year 12, but it’s good because I enjoy it, so it’s not a chore.”

Do you have any role models or mentors you look up to at the moment?

“My parents have been pretty good, they’ve always encouraged me so I just want to be as positive as them.”

SOUTH Australia’s top female footballers will be put through their paces tomorrow as part of the South Australian National Football League (SANFL) Women’s annual preseason testing day. Rookie Me will be hosting the athletic combine testing on behalf of the SANFL and feature all eight SANFL Women’s clubs throughout a busy Saturday afternoon in preparation […]

COLLINGWOOD welcomed three fresh faces in the 2022 AFL Draft, recruiting players with strong upside and versatility in what was a relatively straightforward intake. We recap what the Magpies got up to, and analyse the value each new player may offer to their new club. NATIONAL DRAFT #19 Edward Allan (Tall Utility, Claremont/Western Australia)#28 Jakob […]

CARLTON entered the 2022 AFL Draft looking to cover key list needs, and the Blues’ recruiting team did so exceptionally well with their four National Draft selections. In our next review of the latest draft intake, we put Carlton’s haul under the microscope to recap what went down, and analyse what each new player may […]

THE last remaining West Australian top flight club will enter its first ever women’s side next season, with Perth confirming it will field a Rogers Cup team in 2023. Though not stepping up to the West Australian Football League (WAFL) Women’s just yet – the Demons intend on a senior flight side in the future […]

BRISBANE came into the 2022 AFL Draft knowing it would be a relatively straightforward one, having prepared well to take in two father-son nominees within the first round. Thereafter, the Lions added two pre-listed rookies and re-listed an experienced pair to round out a successful intake. We recap the Queensland club’s crop and analyse what […]

ADELAIDE came into the 2022 AFL Draft with a father-son gun front of mind, but with the capacity to get involved down the order via trading. The Crows did so, acquiring a trio of fresh faces in the National Draft before re-listing an experienced pair as rookies. In the first of our draft recaps, we […]

WITH the 2022 AFL Draft now behind us, it is time for clubs and fans alike to turn their attention to the 2023 crop. Hailed as a potential super draft, next year’s prospects look like an exciting bunch with a typically strong top-end, and a good blend of smalls and talls. Without further ado, we […]