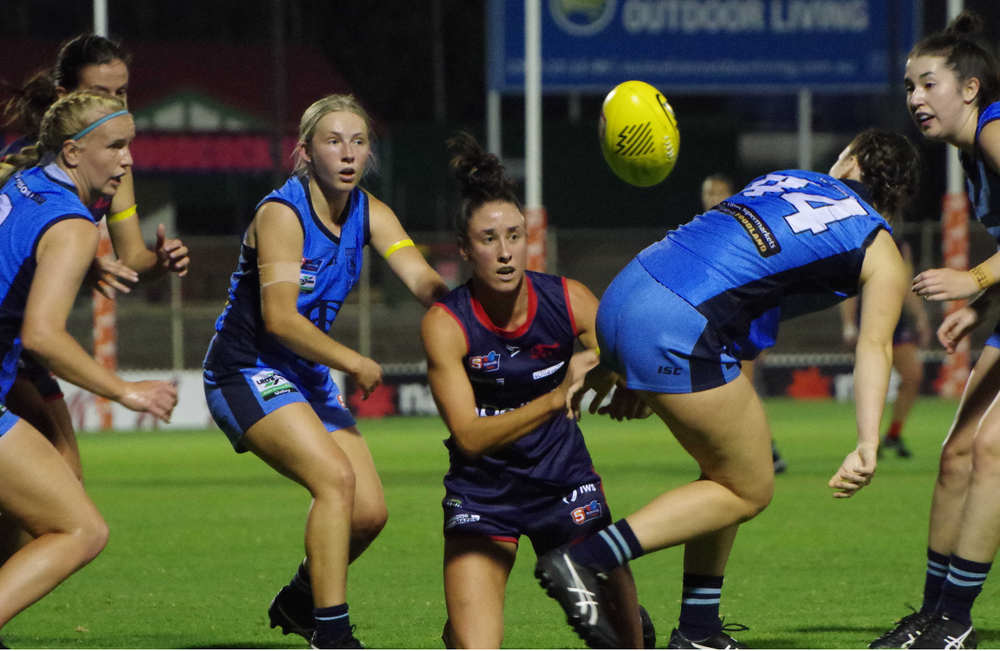 NORTH Adelaide is outright top of the table in the South Australian National Football League (SANFL) Women’s competition after defeating West Adelaide, whilst Woodville-West Torrens Eagles and South Adelaide grabbed wins, meaning five teams are on one victory, with Norwood joining West on the two wins from three games.

South Adelaide has overcome a goalless first half to run over the top of a plucky Central District in a classic contest to open Round 3 of SANFL Women’s action. For the second consecutive week, the Bulldogs kept a side to one goal or less in the first half, then led at the final break but were overrun in the final term. An injury to Katelyn Rosenzweig late in the game hurt the Bulldogs as the key forward had been a strong target and kicked a great goal in the third term.

Chantel Reynolds and Caitlen Teague started off with majors in the first half, as both sides booted five behinds heading into the main break in what had been primarily a battle between the arcs. Forward targets Jess Kirk and youngster Jorja Hooper kicked majors in the opening two and a half minutes of the third term to get the game back in South’s possessions before Rosenzweig kicked truly midway through the term. Back-to-back goals either side of the break to Elyse Haylock and Kirk, following by a towering mark and goal from Hooper, and the game looked out of reach for the Bulldogs. To Central’s credit Demi Sonneman converted in the extra time added by Rosenzweig’s injury, but the Dogs would fall short by five points.

The Bulldogs take on Woodville-West Torrens Eagles at Hisense Stadium on Friday night, while the Panthers host Sturt at Flinders University Stadium on Saturday evening in two battles between 1-2 sides.

Norwood has outlasted Sturt in a tense, low-scoring epic battle of strong defences, getting up by just two points, 3.2 (20) to 2.6 (18) at Coopers Stadium on Friday night. The Redlegs moved to 2-1 in the season and moved two points ahead of the mid-table logjam, with both sides only booting one goal apiece in the first half, and a combined five goals for the entire match. Despite the low scores, the contest had plenty of end-to-end action and edge-of-your-seat contests, with Lana Schwerdt awarded the prestigious Ellen Maple Medal for her efforts in the match.

Elisha Gallagher was first off the board breaking a 10-minute scoring drought with a major, while Sturt broke its drought with a Chloe Forby major just 90 seconds into the second term. Just over a quarter later, Amy Brooks-Birve snagged a second major for the Double Blues to hit the front, and by the seven-minute mark of the third term, led by as much as eight points. Back-to-back majors to Mattea Breed and Elizabeth Drake midway and late in the third term for the Redlegs swung the momentum back in the home team’s favour. The final term was largely played in Sturt’s half, booting three behinds to one, and then having a couple of shots in the final minute, including a set shot to Taylor Prenzler 30m out straight in front, but it just drifted off the boot and was marked on the line.

Norwood host top of the table North Adelaide next Saturday at Coopers Stadium, while the Double Blues head to Flinders University Stadium later in the day to face the Panthers.

In a low-scoring battle that featured just three goals, Woodville-West Torrens Eagles did enough to get the job done and secure the win over Glenelg. The Eagles trailed by two points at quarter time, three points half-time and five points at the final break, but kept the Bays scoreless in the final term, booting 1.2 – which was more than their score for the entire first three quarters – to win 2.3 (15) to 1.6 (12). The victory meant the Eagles moved to 1-2 for the season and completed the set which has seen every team grab a win this season from just three rounds.

The first term was an arm-wrestle which would be indicative for the rest of the contest. Four behinds were scored, three of which went the way of the Tigers. The second term was a complete reversal as Chloe Whitington-Charity and Ellie Kellock cancelled each other out with majors in the opening four minutes of the term. Whilst it might have looked like the game was going to open up on the scoreboard, the next goal did not come for another 40 minutes and by that stage, it was Kiana Lee – who had missed a shot just prior – slotting home what would be the winning goal in the tight encounter.

Next week the Eagles face Central District in a rematch of the first round encounter between the sides, while Glenelg take on West Adelaide, both at Hisense Stadium on Friday night.

In the final game of the round, North Adelaide stood tall in the battle of the undefeated sides, overcoming a scoreless first term to boot the last four goals of the match, and win by 19 points over West Adelaide. The Bloods were missing a number of key players for the encounter such as Madison Newman, Chelsea Biddell and Melanie Elsegood, leaving them a touch short and down on experience up forward. Nonetheless, the Roosters capitalised with 4.4 to 0.2 after quarter time to run out 4.4 (28) to 1.3 (9) winners.

Despite missing their two tall targets inside 50, the Bloods were first on the board less than three minutes into the match, with Gretel Ramsey slotting a goal after a miss from Nicole Hooper to go seven points up. Neither team could score for the remainder of the quarter, leaving the Bloods in control at 1.1 to 0.0. Quick out of the blocks in the second term, the Roosters roared to life in the opening minutes, as Hannah Ewings and Tayla Gordon booted majors, and the reigning premiers headed into the main break with a seven-point lead themselves. After another goalless third term for both sides, the Roosters had another fierce start to the final quarter, booting another two goals inside the first six minutes with Jaimi Tabb and Tayla Thorn driving home the message and grabbing the four points along the way for a memorable win.

North Adelaide will face off against Norwood at Coopers Stadium on Saturday, while West Adelaide host Glenelg at Hisense Stadium on Friday night.