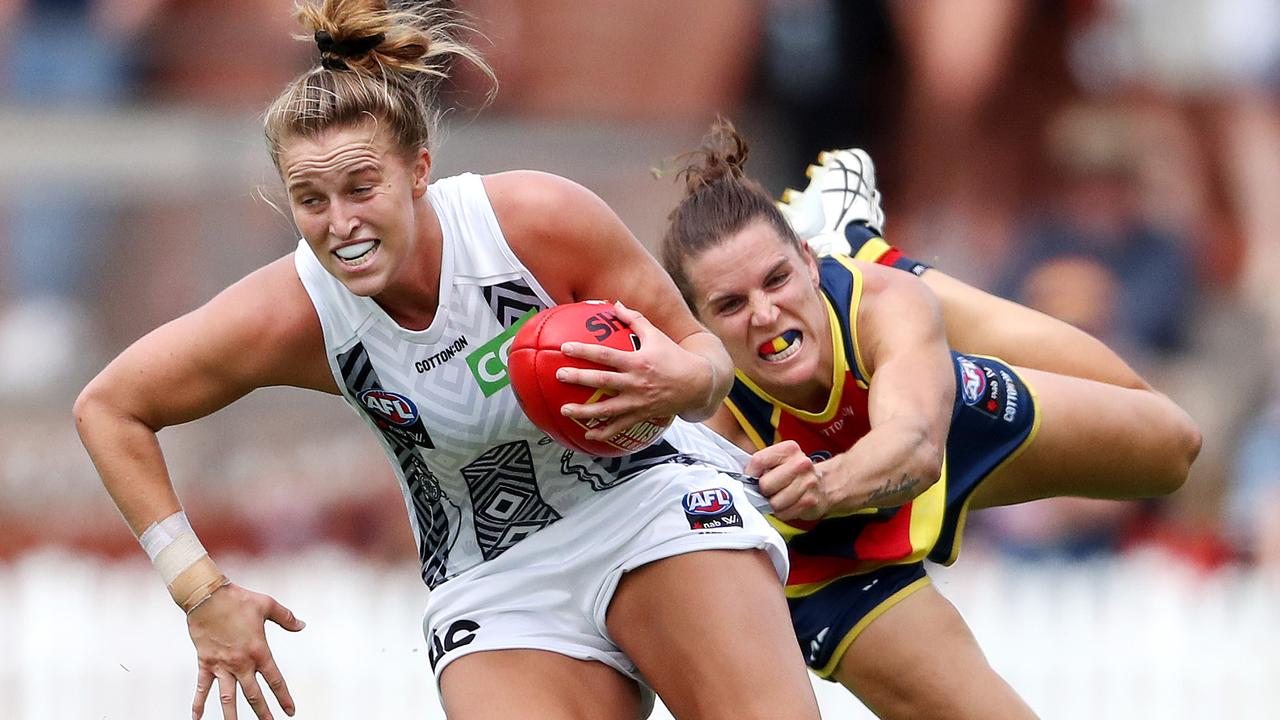 THE Adelaide Crows secured the AFL Women’s minor premiership on Sunday afternoon, downing Collingwood by 14 points and showcasing just how well they can shut down their opposition. Whilst the Magpies showed glimpses of their usual form, the Crows capitalised on their home advantage and piled on the pressure across the ground, coming away with the 4.7 (31) to 2.5 (17) victory.

The Crows earned a week off during the first week of finals for their effort, with a solid first quarter effort credit to the team’s spread across the ground and smothering pressure both on and off the ball. A couple of early majors to Justine Mules and Ash Woodland set the tone as Anne Hatchard, Ebony Marinoff and Erin Phillips controlled movement around attack, and while a Jaimee Lambert major kept the Magpies in it during the first, it was all Crows for the remainder of the match as they piled on the offensive pressure.

A huge second quarter saw Adelaide put on a defensive masterclass, locking the Pies out of their attack and forcing turnovers and stoppages aplenty when they entered. The tight contest remained as the Crows missed a couple of chances, but an early Hatchard goal kept the side well ahead of the Pies with a huge second half expected. The Magpies really lacked their usual spark, and while Lambert, Bri Davey and Britt Bonnici kept on driving forward, applying their typical physicality, a concussion to Sophie Casey following a collision with Stevie-Lee Thompson put the side down a player with little momentum heading into the remainder of the match.

The final term saw an early goal from Chloe Molloy spark a bit of excitement into the Magpies, but while they took advantage of their renewed energy to keep in the match, three behinds showed just how tight the Crows defence remained despite putting 0.2 on the board themselves. A 29 per cent efficiency inside 50 saw the Magpies rue their missed chances, with a big week of finals footy coming up.

For the minor premiers, Hatchard (22 disposals, six marks, one goal) and Marinoff (18 disposals, six tackles) led the way as Chelsea Randall, Phillips and Woodland (booted 1.2 from eight disposals) were also named amongst the best and Teah Charlton put a major on the board. The Magpies’ usual suspects earned top honours again, with Lambert (25 touches, eight tackles) and Davey (22 and eight) wreaking havoc but unable to translate on the scoreboard, as Bonnici and Ruby Schleicher piled on 22 touches apiece.

The Magpies will host the second qualifying final on Saturday afternoon, taking on North Melbourne in what should be a tantalising contest. Adelaide earns the qualifying week off and will host a semi-final in two weeks time.

FOR two sides looking to get one more win on the board to finish out the home and away season, only pride was on the line as the GWS GIANTS and Carlton Blues went head-to-head in their last match of the season. While Carlton was out of the running for finals contention following North Melbourne’s win on Saturday, it did not stop the side from putting a tough effort out on the field – something they required, with the GIANTS looking to make one last jump up the ladder. But the Blues only just got over the line in a result that was befitting of their disappointing season, coming away with a tight 4.8 (32) to 4.7 (31) win on the road.

Cora Staunton set the tone early and proved the GIANTS would not relent easily with a goal in the opening minutes, but that was all the GIANTS fans would get for the opening term as the Blues tightened up defensively, creating stoppages and limiting the side’s movement. A Darcy Vescio goal to add to her highlights reel saw the Blues spark into action offensively toward the end of the term, but with a one-point ball-game at quarter time there was still plenty to work on. Maddy Prespakis and Bec Beeson were the predominant ball carriers for their respective sides as Alyce Parker also put on a show.

But the side’s momentum was slashed when Staunton once again opened the second term with another major to edge a lead, seeing a string of behinds before Brooke Walker broke the trend with a major to steady the ship. Two more behinds were made by the Blues before Lauren Brazzale extended the Blues lead but it was a frustrating affair as Carlton continued to waste chances to capitalise on their clear momentum. With a 13-point half-time margin the Blues had plenty of chances to run way with it but lacked potency once more, though they were fortunate that the GIANTS also missed chances. It continued to be the Staunton and Vescio show as Staunton kept GWS driving forward but missed the remainder of her three attempts on goal, while Vescio made history booting her 16th goal of the season, winning the goalkicking award for 2021 and becoming the first AFL Women’s player to boot over 15 goals in a season.

It was not enough though as the Blues slowed down in the final quarter, with Tait Mackrill putting her second goal on the board to go one-point down and keep the GIANTS in the hunt with under 10 minutes left on the clock. But defensively, both sides plied their trade well to ensure the tight encounter went down to the wire, with neither side able to create scoring shots as the Blues ran out with the narrowest of wins to complete their season.

For the GIANTS, Beeson’s 27 disposal, four mark and four tackle game saw her lead the charge as Parker (26 and six tackles) plied her trade and Staunton was dangerous up forward booting 2.4 from 13 touches. For the Blues, Prespakis’ 27 touches were crucial as co-captains Katie Loynes (eight tackles, two behinds) and Alison Downie (three rebounds, three tackles) played their last game in the navy blue, putting out solid performances.

Saints punish disappointing Eagles to end season on a high

ST Kilda has finished its AFLW season in style, while West Coast enters its offseason with plenty to ponder after falling to the Saints in the final game of the home and away season on Sunday afternoon. The Eagles led the visitors by less than a goal at quarter time, but a four goal to nil second quarter saw the Saints stamp their authority on the contest, running away with the win 11.10 (76) to 3.2 (20).

West Coast started the game in style, with rookie Grace Kelly combining with sister Niamh to open the game’s scoring with a blistering goal on the run. The Eagles looked to take control of the game for the majority of the opening term, before the Saints answered through All-Australian forward Caitlin ‘G-Train’ Greiser to bring themselves back into the contest. With a margin of just four points in favour of the Eagles after a quarter of football, it looked as if the 809-strong crowd would be treated to a close game. The second quarter changed this, as the Saints hit their straps and the Eagles began to fall apart. Goals to Greiser, Jess Matin and Molly McDonald saw St Kilda break the game open, while the Eagles were scoreless for the quarter to see themselves on the end of a 22-point deficit at the main break.

The Eagles started the third term with promising signs, resulting in a second goal to Grace Kelly to cut the margin to 18 points in what looked to be the beginning of a comeback. This hope began to fade as former basketballer Tyanna Smith kicked a remarkable goal to keep the Eagles at bay. With a bandage around her forehead, Smith skilfully tapped the ball to her advantage before gathering and shrugging off a tackle and kicking the goal of the day from a tough angle. The goal proved to be a steadier for the Saints as they entered the final break with a 27-point lead over their opponents. The final quarter was decided shortly after it began as the Saints kicked three goals in three minutes through Darcy Guttridge, Kate Shierlaw and Georgia Patrikios to put the game away and finish their 2021 season in style, taking home the win by 56 points.

For the victors, there were excellent performers all over the ground in a clinical performance, but the midfield duo of Patrikos (30 disposals and a goal) and Smith (24 disposals and a goal) clearly stamped their influence on the game. The Saints were electric through the middle and the pair had plenty to do with this. Meanwhile in the forward line Greiser and Matin combined for five goals to give opposition defenders a constant headache. The only negative for the Saints came in the form of a head knock to forward Jacqui Vogt. For the Eagles, Mikayla Bowen (22 disposals and five tackles) and Belinda Smith (18 disposals) battled bravely in what proved to be a tough day at the office.

With both teams failing to qualify for finals, this match up would be their farewell to the 2021 season, as they look ahead to improve and rise up the ladder next year.