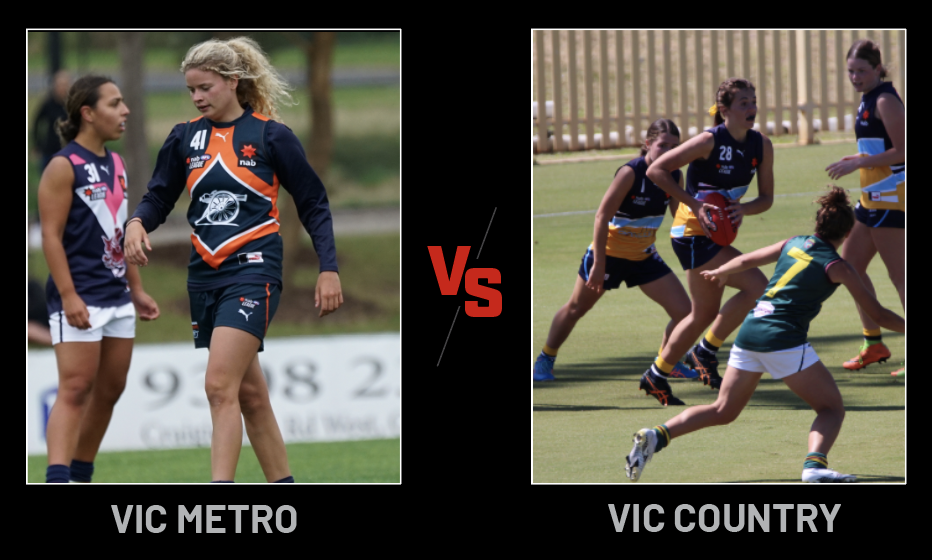 THE all-Victorian battle at the 2021 AFL Women’s Under 19 Championships is not to be missed, with stars across all thirds of the ground and Metro going head to head with Country in a massive game at Trevor Barker Oval, Sandringham from midday tomorrow. Country has named its lineup for the Round 1 clash of the championships, whilst Vic Metro has listed its squad for the match, though the lineup provided here is predicted/potential.

Looking across the line-ups, the sides have strengths in different areas, with Vic Metro’s midfield, and its size and key position talent among its strength, whilst Vic Country’s defence is its strongest line, but also its balance and even spread of players providing different roles. Metro has picked a team that has stars across multiple lines, whilst Country have the talent in there, but have also picked players that are unique in the way they can fill a role within a certain team, and very few players are too similar. The midfield battle will be crucial, whilst both sides have versatile players who can fill multiple positions.

Can the smaller Vic Country midfield match the bigger-bodied Metro side?

Both midfields are strong and talented, but it is clear straight away that Vic Metro has a midfield of taller, bigger-bodied players that will look to take advantage of the smaller Vic Country midfield. Tess Craven, Elizabeth Snell and Grace McRae have been named to start onball for Country and they will not take a backwards step up against the taller Charlie Rowbottom, Georgie Prespakis and Maeve Chaplin. The bigger bodies inside will help Metro around the contest in getting it out, so the smaller Country mids will have to use their extra few quick steps – particularly Snell – in extracting the ball from the contest.

How will all the Vic Metro midfielders fit in the side?

The Metro midfield is so deep, they have around 15 players who would call the midfield their preferred position. The question mark will come over how they fit them all in, and some have been learning other roles over the past month or so in order to impact the contest. Kiana Lynch and Chloe Saultry have been holding firm in defence for the Dragons, with the likes of Keeley Sherar and Emelia Yassir both capable of starting forward and hitting the scoreboard. One would expect the sole bottom-ager in Montana Ham to play forward and be a marking target, whilst Pia Staltari, Stella Reid and Brooke Vickers have been playing off flanks throughout the year in between pinch-hitting in the midfield from game-to-game. One thing is for sure, midfield rotations will not be a problem for Metro.

Can Grace Matser work over the Vic Metro tag team through the ruck?

The hard-working and endurance-based ruck of Grace Matser will have her work cut out for her in this game, being the only pure ruck in the team for Vic Country. The Gippsland Power player can run all day, and she will need to, up against the equally mobile Georgia Campbell and Tahlia Gillard who will get breathers forward when the other is rucking. Even outside those two the Metro side has talls that can jump in, while for Country, they are a shorter side, and might just get the likes of Mackenzie Eardley and Renee Tierney up opposite ends to help give Matser a chop out and save her running. Either way, a big game awaits for the ruck.

Where are the key strengths in each side?

Whilst neither side has a “weak” line, the strongest third for Country is its defence, whilst Metro’s strength is in its midfield. Metro’s four AFL Women’s Academy members in Georgie Prespakis, Charlie Rowbottom, Maykaylah Appleby and Gillard could lineup as a midfield group with the two inside ball-winners, outside runner and ruck. They will likely have first hands to it given their aforementioned strength and size in there, whilst Country will be well set up behind the play to prepare for inside 50s. The metro forward line has some quality talls, as well as midfielders who will play the role of forwards, which will give the Country defence – of whom all have good footy IQ – an advantage. They need to bring the ball to ground, but are equally comfortable in intercepting in the air, particularly Elizabeth Dowling, Annie Lee and Nyakoat Dojiok.

How can each team exploit the other?

Vic Country can use its well balanced lineup to keep it simple and each player play their role they are used to at NAB League Girls level. Looking at the side named, there is no-one in the team out of position from where they have been playing, which immediately means there is little to learn. Some might play a little deeper than they have been, but it is easily adaptable, and the players are versatile. With every forward a different type of player, the Country forward line is so well balanced and impressive. Metro can try and take control to exploit the smaller Country team, and with longer boots on them, Metro can put pressure on the famed Country defence, and really aim to put the ball into the danger zone regularly.

As previously mentioned, this matchup could be a massive one, with Matser the sole number one ruck in the side, and will no doubt be ready for a great challenge on the day. Both Campbell and Gillard move well around the ground and are not afraid to take a bounce before distributing, and then go deep forward and provide a marking target. First hands will be crucial in the midfield, so the winning ruck can try and aid their midfields with clean hands.

The need for speed and class on the outside is crucial, and both these teams have some talented players likely to roll out on the wing. Appleby is the Academy member who has the experience in big games, while Reid has been in ripping form, capable of playing anywhere. Livingstone is another wing who has that touch of class in moving the ball in transition, whilst the height of Friend and Houtsma – as well as the versatility – and the speed and ball-winning nous of Smith, will make it a couple of matchups to watch.

The smallest Metro midfielder is the same height as the tallest Country midfielder, which shows a bit of a size differential in there. Whilst Rowbottom is 10cm taller than any of the others, each of the players are likely to have an advantage in size over their respective opponents. A total 18cm different in favour of the Metro side is impressive, but it is also the strength in there which will look to win the ball in contested situations. McRae, Craven and Snell are all renowned tacklers and quick with ball-in-hand to exit stoppages, which is where they have the advantage. Prespakis, Rowbottom and Chaplin can all roost the ball and can back their talls inside 50 if they bomb it from a stoppage.

It might not be the matchup Metro send to Country’s top prospect, but Delgado is the most reliable in the air one-on-one, and is the only tall in the Metro defence who could go with Slender no matter where she goes. The Northern Knights tall has played in defence, attack and through the midfield, so it would be less rotations for Delgado to just try and nullify the well-balanced Slender, whilst the Bendigo Pioneers tall will no doubt play a number of roles on the day, and be tough to stop in the air or at ground level, but Delgado is the most suitable matchup.

One of the danger players across the ground is the speedster in Clarke who opens up the space behind herself so well to run into open goals and hit the scoreboard regularly. It will be tough to find a matchup for speed, with Staltari and Lynch likely to be rolling through the back half of the ground. In terms of athletic traits, perhaps the regular midfielder Friswell is the closest in terms of speed, finishing 10th in the preseason 20m sprint, to try and combat Clarke’s clear top billed ranking what was 0.6 seconds quicker than anyone else.

The match is set to be a cracker, with both sides littered with talent and among the top teams in the championships as they are each year. Last time they faced off back in 2019, Vic Metro got the job done, so Country will be hungry to reverse the result here. The Country side has enough balance across the board to really worry Metro, whilst Metro has the top-end talent, particularly in the midfield and key position to stretch the Country side, making for an absolute beauty of a contest.