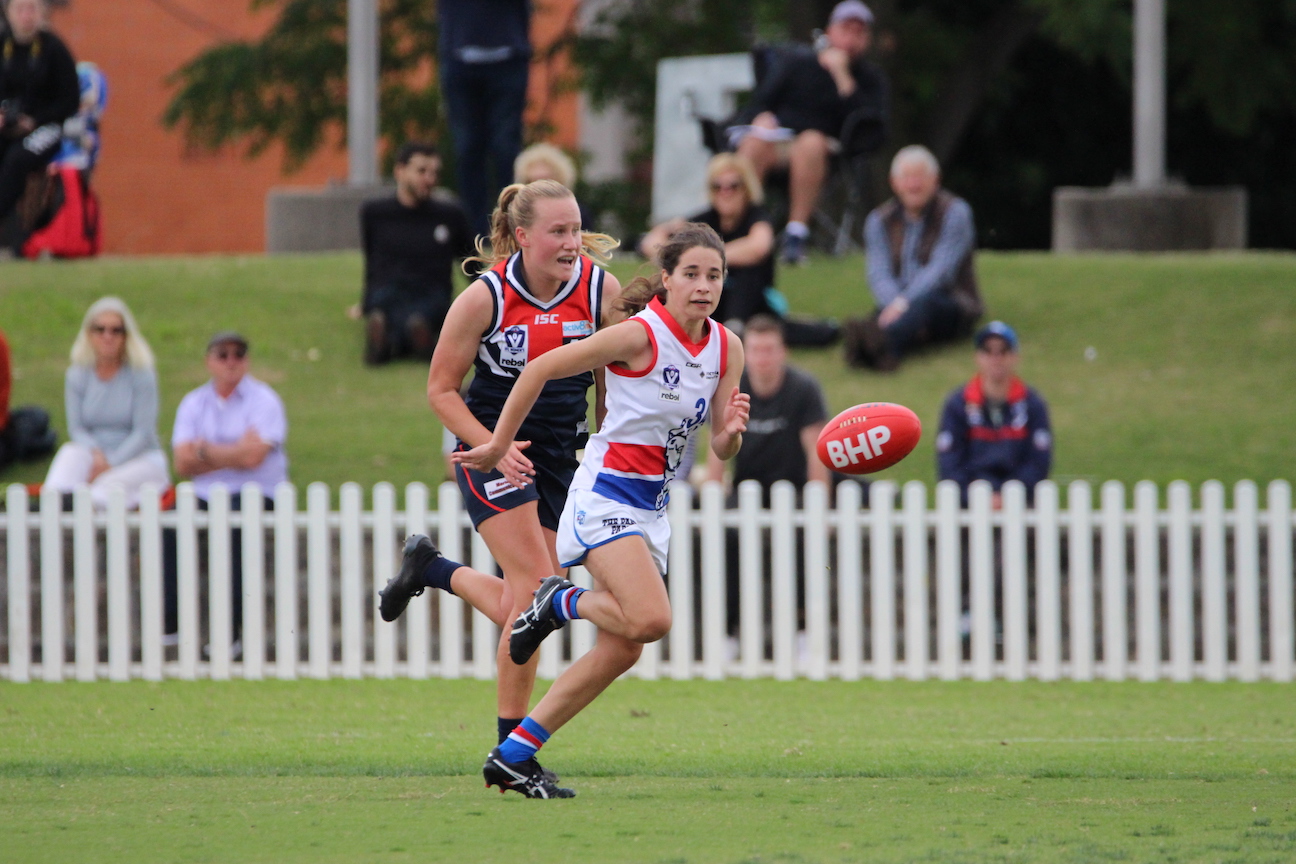 THE Victorian Football League (VFL) Women’s returned for Round 7 on the weekend, with six fixtures split evenly across Saturday and Sunday. With the 2021 AFL Women’s season run and done, top flight players are now filing through the state league system at a greater rate, strengthening the eight aligned teams. We take you through how some of the standouts performed over the weekend in our Reserves Wrap.

Collingwood’s unblemished run rolled on as the Magpies accounted for Southern Saints for their seventh win of the year. Key forward Bella Smith was best afield for the victors, booting a game-high three goals having gained valuable senior experience in 2021. Another returning player, Maddie Shevlin notched 25 disposals, as twin talls Abbey Green (two goals) and Abbi Moloney (one) both hit the scoreboard in black and white.

First year Saints midfielder Alice Burke was easily the most prolific ball winner on the day, finishing with 35 disposals in arguably her best effort to date – at any level. Fellow youngster Molly McDonald (19 disposals, five marks) featured among the votes with Jacqui Vogt (14 disposals, eight tackles, one goal), as Poppy Kelly fared well in the ruck to win 30 hitouts.

While Hawthorn boasted some former AFLW talent of its own, the standalone was up against it as Casey fielded a strong crop of senior players in a 13-point win. Ruck prospect Maggie Caris looks primed to crack a senior berth next season having continued her terrific year in the twos, with another 11 disposals and 22 hitouts. Megan Fitzsimon and Mietta Kendall also featured, contributing 12 touches apiece, as Isabella Simmons booted a goal and Irishwoman Lauren Magee returned to the fold in handy form.

Geelong was another side to blood plenty of youth through its VFLW-aligned lineup, with senior players among the best afield in the Cats’ win over North Melbourne. Dynamic tall forward Olivia Barber booted an equal game-high three goals, as Laura Gardiner topped the disposal charts with 27. Sophie Van De Heuvel had it 22 times to join the aforementioned pair in Geelong’s votes, while Georgie Rankin (18 disposals, seven tackles) and Darcy Moloney (14 disposals, one goal) played their parts.

At the opposite end of the ground to Barber, first year ‘Roo Brooke Brown also snared three majors in another promising display. She was joined by Sarah Wright and Amy Smith in the side, with both finishing on 13 disposals in serviceable outings. Wright also got her hands dirty with nine tackles.

The Western Bulldogs snapped a long losing streak on Sunday, defeating Darebin Falcons with a side loaded up on elite level players. A bunch of them got among the goals too; Danielle Marshall led the way with three, while Gemma Lagioia and usual defender Eleanor Brown both snared two. Angelica Gogos (23 disposals, one goal) was named best afield in the win, while Amelia Van Oosterwijck was also among the productive brigade of senior stars to do damage in red, white, and blue.

In the round’s final game, Port Melbourne snuck home against Carlton to keep its perfect record in tact, with imposing Richmond forward Sabrina Frederick (two goals) leading the attack. For the Blues, Paige Trudgeon was awarded full votes for her 12 disposals and seven tackles, as Maddy Guerin led her side’s disposal count with 21, and Charlotte Hammans also earned votes. Among the other senior Blues to feature, Serena Gibbs took on some ruck duties with 11 hitouts to go with her 10 touches.