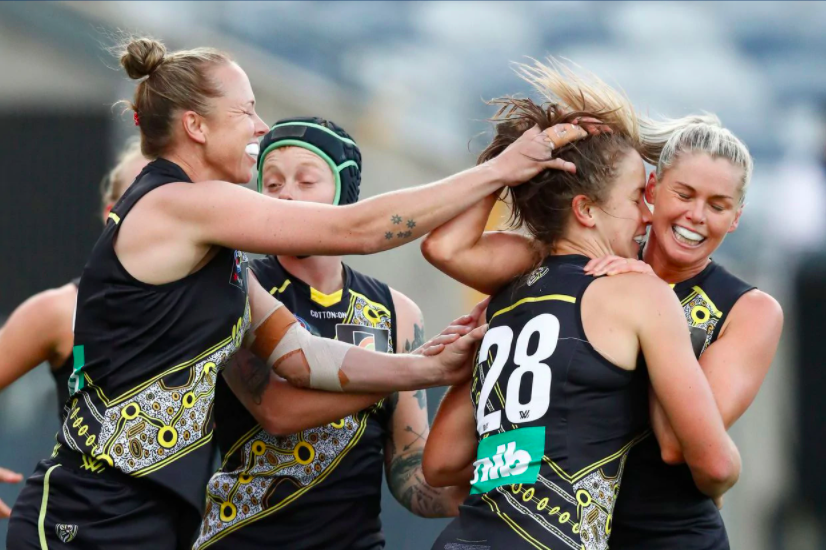 IT was a day of big AFL Women’s wins, with Adelaide and Carlton both easily accounting for GWS GIANTS and St Kilda, whilst Richmond picked up its first win since the opening night of the season, defeating West Coast in he final match of the day.

After a shock loss last week, the Adelaide Crows came back to their dominant best, completely thrashing the helpless GWS GIANTS. The GIANTS were kept goalless as the Crows ran away with the win to the tune of 40 points.

Adelaide back at their dominating best

The Crows stunned the AFLW world after an unexpected shock loss last week to the Bulldogs, but they were certainly back to their usual selves this week. They were back at their dominating best, putting the lesser sides to the sword and putting them away rather easily.

Is it the end of Alan McConnell?

In the last two matches, GWS have only scored one goal and that came with only about three minutes to go against the Dees.

GWS are in a bit of a crisis at the moment, and 2022 is turning out to be quite the wasted season for them.

GIANTS coach Alan McConnell is under the pump at the moment, and if things keep going the way they are for GWS, it is hard to see him surviving in his job past the end of the season.

Ebony Marinoff just keeps proving why she is such a star of the competition, and yesterday’s clash was no different.

Against GWS she reached the milestone of 1000 career disposals, and is the first player to do so in the history of the competition.

Ashleigh Woodland is having a stellar, some might argue even breakout season, so far in 2022, and that form continued yesterday.

Although she only had the two touches, she did kick two goals to stay well in touch with the likes of Tayla Harris for the race for leading goalkicker.

One sour note to the win

There was one sour note to the Crows’ dominant win yesterday. Erin Phillips hobbled off the ground with what appears to have been some kind of knee injury. The severity has not been confirmed yet but Adelaide and its fans will certainly be hoping it’s nothing too major.

GWS do not have to wait long for their next encounter, with their rescheduled Round 5 clash with the Saints finally taking place on Wednesday. The Crows have to wait until Saturday for their next clash, with a trip to Perth to battle the Dockers on the cards for them.

Carlton snapped its four-game skid on Saturday afternoon, bringing St Kilda’s losing streak to six in the process of a 46-point win to treat the adoring home fans at Princes Park. After nabbing the first two points of the game, the Saints were shutout thereafter as Carlton proved too strong across the ground. The result, a 7.6 (48) to 0.2 (2) scoreline and mini revival of the Blues’ season.

Much was made of Carlton’s scoring woes coming into this bout, deemed somewhat of a danger game against the winless St Kilda, but it was the Saints who were comprehensively shut out in attack. Despite registering two minor scores within four minutes in the opening term, Keeley Sherar‘s first senior goal set Carlton in motion and the Blues never looked back. It not only saw St Kilda suffer its sixth defeat of the season, but also equalled the competition’s lowest-ever total – 0.2 (2).

Gee, a bit of speed in midfield is nice

Carlton has been bereft of a spark in midfield this season, but seemed to get the balance right on Saturday. Complimenting the hardness and ball winning prowess of Madison Prespakis, Mimi Hill and the electric Georgia Gee satisfied the Blues’ need for speed. Throw in the sweet lateral movement of Grace Egan and class of Jessica Dal Pos, and Carlton’s engine room looked much more potent away from the initial centre bounces.

Breann in the mood

Given their struggles in the tall forward department, the Blues could do worse than to delve deep into some sort of cloning technology. That is, to create a double for Breann Moody, who clunked a couple of patented contested marks inside 50 and booted her first two goals of the season. Finally, Carlton had a target deep in attack and with Jess Good doing her bit in the ruck, perhaps this is the combination to carry the Blues forward until they fill the void through draft and trade period.

It is no secret that Carlton fans have been suffering of late, with their side competitive in patches across the last month, but ultimately overwhelmed when the whips begin to crack. Upon hitting their stride on Saturday, the Blues buried St Kilda in arguably their most complete performance for the year. Even when Carlton didn’t score – in term three – its defence held up and also kept St Kilda scoreless within the same period. It looked a much more balanced, settled Carlton side.

St Kilda’s chance to bounce back comes quickly, with a fixture against Greater Western Sydney arriving on Wednesday. The Saints will travel up to Blacktown for that clash, and Carlton will make the trek to Canberra to also take on the Giants, at Manuka Oval on Sunday night.

After a tough few weeks, Richmond were able to put together four quarters and defeated the West Coast Eagles by 23 points.

The Tigers came out of the blocks, scoring 10 goals in the first half, and they worked well together, including Monique Conti and Ellie McKenzie, which left the Eagles with no answers on stopping them.

With both teams wanting to address the starts to the game, the Tigers midfield, with the likes of Conti, McKenzie and other stepping up as a unit, will certainly be happy with how the start  continued for the rest of the match.

It’s been a tough few weeks, with key players having season-ending injuries but no doubt the Tigers should be proud how they played this match. The likes of Meg Macdonald, stepping up from the VFLW and kicking her first goal to seal the game will something to be proud about. Another highlight was Akec Makur Chuot kicking her first goal. It was great to see other players for the Tigers make the most of their opportunities and the flow of the game was great to watch. This win will no doubt give the Tigers give more confidence and continue to improve and finish the season strong.

Monique Conti continues to cause damage

Monique Conti continued to show why she is a key player and class for the Tigers, finishing the game with 24 disposals, 13 kicks, 11 handballs and nine tackles, having a huge impact for the side and applying the pressure, giving the speed and energy and causing headaches for the Eagles.

Eagles start hurt for the rest of the match

The West Coast Eagles will no doubt be disappointed with how they allowed the Tigers to have a fast start out of the blocks, conceding five free kicks from defensive 50 and making mistakes.

Emma Swanson continuing her great season, needs others to step up

Emma Swanson was a shining light for the Eagles and continuing her strong performances, but no doubt needs others to step up and help her out.