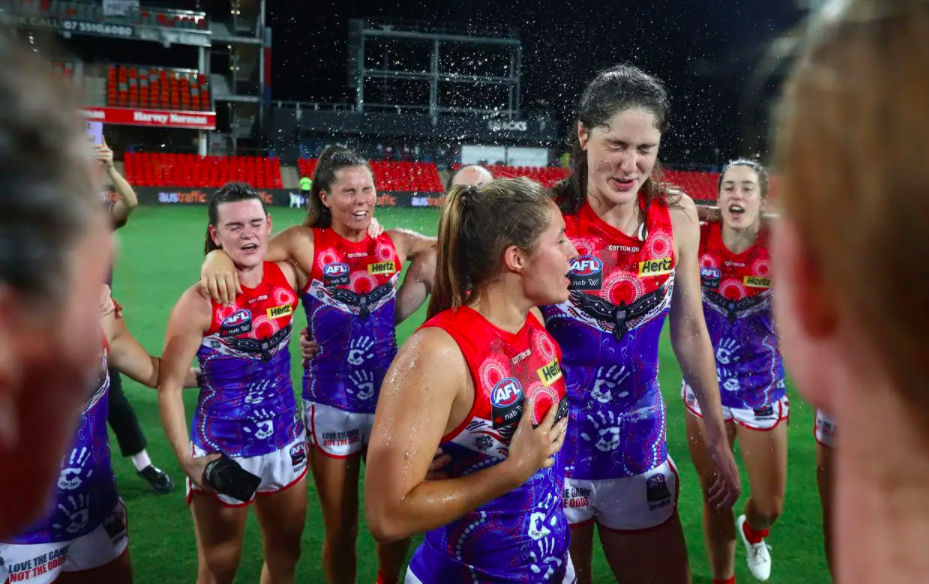 THREE debutants entered the AFL Women’s arena in Round 7, as a bunch of players in their maiden seasons continue to make waves across the competition. We take a look at how those in their debut campaigns performed this past weekend – either first-year players, or those who were yet to make their AFL Women’s debut despite being on a club’s list prior to 2022.

Before their enthralling draw with Gold Coast, the Western Bulldogs scored a third-straight win over Geelong to open Round 7. First year draftee Elizabeth Snell featured against the Cats, laying six tackles in a typically hard-working display. Her intensity and work ethic have caught the eye of Dogs fans across five outings.

In the hoops on Friday night, star draftee Georgie Prespakis had a rare game under double-digit disposals, but laid 11 tackles as her side went down. Fellow Calder Cannons graduate Zali Friswell was matched by Irishwoman Rachel Kearns for six touches, while Gabbi Featherston had it twice in her sixth consecutive game.

Adelaide proved far too strong for Greater Western Sydney on Saturday, keeping the Giants goalless throughout a 40-point drubbing. The Crows unveiled a debutant in the big win, as Glenelg product Brooke Tonon got out for her maiden outing after some solid SANFLW form. She managed five disposals and a couple of marks before the customary Powerade shower.

GWS’ Emily Pease notched a career-best 14 disposals for the second time in three games, complimenting the feat with four marks and six tackles. Brid Stack also got stuck in with half-a-dozen tackles, while Ally Dallaway contributed 10 touches and promising ruck Ally Morphett had seven, to go with a couple of clearances and 13 hitouts.

After a month of pain, Carlton got back onto the winners list with a 46-point salute over St Kilda on Saturday evening. It was a case of ‘Is Jess, is Good‘ for the Blues, as their ruck addition kicked her first senior goal and provided good fold as Breann Moody rotated forward.

Elsewhere in navy blue, Paige Trudgeon‘s breakout season continued as she took three marks among 12 touches, while Keeley Sherar joined the first goal club this week, and club leading goalkicker Courtney Jones got troubled the scorers again with a major from eight disposals and two marks.

In red, white and black, Ella Friend turned out for her third game and notched seven touches, while her former Vic Country teammate Ash Richards had a clear career high of 13 disposals and three clearances – after three games of three disposals. Lucy Burke rounded out the first year representatives with her five touches.

Yet another player snared their first AFLW goal, this time in Richmond’s mature-age addition Meg Macdonald. She also earned two marks and laid as many tackles, while fellow mature-age coup Meagan Kiely won 12 disposals as the Tigers got up in a high-scorer over West Coast. Young gun Emelia Yassir was also afield for her sixth game, managing five touches and a clearance.

Meanwhile, the Eagles unleashed another debutant out of last year’s state Under 19 squad – Emily Bennett. She managed a handful of disposals but also laid six tackles. Fellow 2021 state academy members Charlotte Thomas, Courtney Rowley, and Sarah Lakay also continue to turn out for the Eagles. The former had the most touches of the bunch (eight), while Lakay won two clearances and 12 hitouts.

North Melbourne further cemented its finals credentials with a 23-point win over a sliding Collingwood outfit, though first year players were not quite the order of the day for either side. Second-year father-daughter recruit was terrific for the Roos, taking five marks and laying seven tackles to go with her career-high 13 disposals.

In black and while, first year forwards Eliza James and Eloise Chaston turned out once again, having only missed one game combined this season. The former managed nine touches and laid four tackles, while the latter had it five times and took a couple of marks as their side went down for a third time in 2022.

Melbourne rounded out an exciting set of fixtures on Monday with its thrilling three-point win over Brisbane on the road. The Dees unleashed their own debutant, Tahlia Gillard, who came into a rather settled side and took a pair of marks among her four disposals. First year midfielder Eliza West was again terrific, booting her first senior goal and driving forward with smarts and purpose.