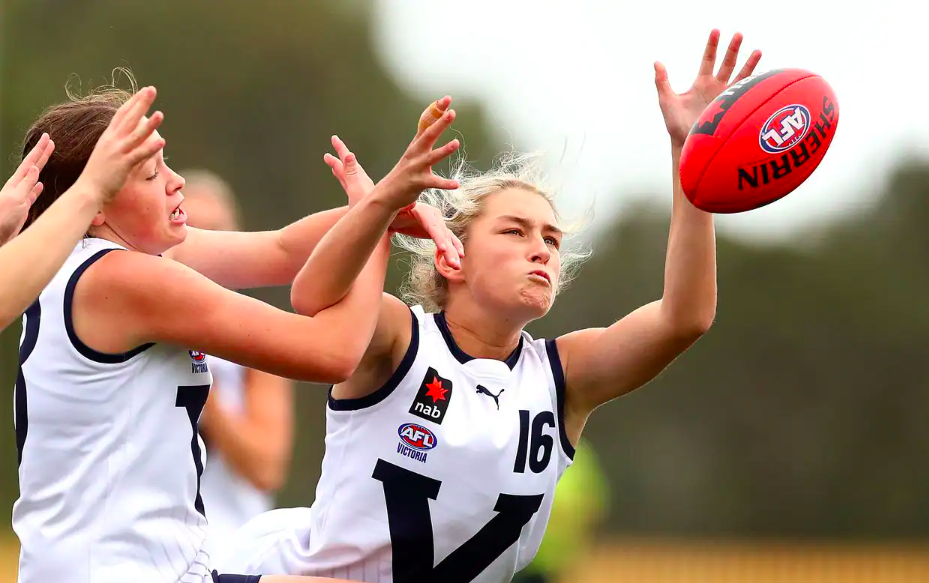 VIC Country made it two wins from two attempts against their Metro counterparts this year, running out 39-point victors in Thursday’s AFLW Under 16s clash at La Trobe University. In a glowing glimpse of the future, Victoria’s best 2005 and 2006-born prospects locked horns a day before the nation’s Under 18s went to battle in Werribee. We note some of the top performers in the latest edition of Scouting Notes.

It was by no means a massively prolific outing from Buckley, but she fared well up forward before earning exposure in her more comfortable midfield role. The Northern Knights talent played somewhat above her size, marking cleanly overhead on a couple of occasions during term two and earning a shot on goal with the first of them. She then rolled into the centre bounces after half time and continued to work hard, finishing with 10 touches and seven tackles.

Taking out MVP honours for Metro as a bottom-ager in the Under 16s category, Baker-West again topped the disposal charts for her side with 23, including six clearances and a goal with the last kick of the game. The Calder Cannons prospect started steadily up forward but showed her class with a pass to assist Kyla Forbes’ second term goal. Her fluent long kicking and flowing style of play made for good watching, as she spent more time in midfield during the second half.

After a whirlwind few weeks which included NAB League premiership success, Grieves took time to adjust to representative duty but looked lively in her second outing. The Western Jets goalsneak was much more assured in the forward half and got busy with a mix of tackling pressure and creativity in possession. She worked hard up the ground and handled the ball cleanly off the deck, but couldn’t quite hold her marks – having a few ‘almost’ moments. She was another who earned some midfield time, and produced an eye-catching passage in the final term with her dancing feet.

Another piece in the Metro midfield-forward rotation, Forbes looked as polished as anyone out there on Thursday with particularly influential play up forward. She had an early sight on goal, steadying on the run inside 50 but missing her shot, only to make amends with a beautifully struck set shot in the following quarter. She was clean with many of her 18 disposals and took four marks, with her left-foot kicking looking slick as Metro got creative inside 50.

Doultree is a real competitor in defence and along with the likes of Molly McErlain, took on a tough gig in the Metro backline. She’s already a good size at 173cm and can play somewhat tall or small, doing so across her 17-disposal, six-rebound 50 performance. One of Doultree’s best moments was a strong contested intercept mark on defensive wing, capping off a solid game during the fourth term.

Again stationed out on the wing, Farrell was one of the most prominent players during the opening quarter and racked up some of her more impactful touches early on. She looked to surge the ball forward and was able to find the ball in both halves of the ground, leaning on her athletic base to accumulate possessions. Her decision making and execution was the only thing which let her down at times, but there was plenty of promise on show from the Sandringham Dragons utility.

There was no fuss or mucking about from Tallariti on Thursday, as she sought to punch Metro forward in the most direct way possible. Her route-one long kicking resulted in four clearances and five inside 50s, as the Oakleigh Chargers product snatched plenty of meterage by foot on the end of her strong work around the ball, and between the arcs.

It was another fruitful day for Adams under her customary helmet, with the Geelong Falcons prospect racking up 19 disposals and laying nine tackles as one of Country’s hardest working midfielders. Solid is often a decent measure of her game, and that was no different on Thursday. The prolific inside ball winner also got reward for effort in the form of a third quarter goal, taking her chance on the run inside an open attacking 50.

Far and away the best afield on Thursday, and a worthy recipient of Country’s MVP medal, Painter returned a dominant shift with work in each third of the ground. Starting in midfield, her ability to straight-line the ball and bulldoze her way forward was outstanding, on top of a work rate which saw her accumulate possessions absolutely everywhere. After a sensational first half, Painter shifted forward but was just as good there, before swinging back in the final quarter. Her power and ball winning nous proved adaptable to each position, making her hard to beat both in the air and at ground level. She ended up with a game-high 28 disposals, five marks, six tackles, six clearances, and one goal.

A mainstay on the wing with traits perfectly suited to the position, Howley was productive for Country on the outside. While lightly built, her running capacity and ability to break the lines make her a damaging prospect. Add to that her long kicking, and Howley is a metres-gained machine. The Geelong Falcons talent proved exactly that on Thursday, and also got on the board with two second-half goals to cap off a promising outing.

Douglas is one who had an impact at both ends of the ground, proving versatile enough to produce big plays in either role. Starting forward, she took her chances with two first-half goals – snapping one around the body and sneaking one home off the deck in a goalsquare scramble. Her evasiveness and smarts proved valuable in attack, before translating to competitive work in defence during term four. Douglas produced a strong final quarter, helping Country rebound and proving hard to beat when recovering ground balls inside defensive 50.

While a touch quieter in comparison to her game one exploits, Centra still managed to produce some ‘wow’ moments with two goals from 10 disposals. The Gippsland Power standout looked lively early with a snap goal and clean mark off a Metro kick-in, taking up her usual forward post. She then shifted into midfield to test her work rate and contested side, proving up to the task with a couple of special plays. Her dynamism came to the fore, as she produced a clean centre break linking up with Kiara Woods, before another passage saw her step an opponent and slot a goal from 40 metres. She’s all class, and has the type of x-factor that makes her seem untouchable at times.

After a terrific outing in game one, and a promising bottom-age NAB League campaign, Williamson showed a few glimpses of her best form on Thursday. Having cut her teeth on the wing, she took on more of a midfielder-forward role during the first half and produced a nice moment of composure with her first-term goal. After reading the ball off hands, she steadied well on the run and slotted the ball home. With four inside 50s, her ability to carry the ball forward was an asset, and Williamson’s athletic base at 173cm points towards both enormous upside and versatility.

An imposing figure at 183cm, Woods brought a real presence to her play on Thursday and presented plenty of upside as a mobile ruck. She displayed good touch by hand with four marks and 19 hitouts, but also got involved with three clearances among her nine touches. Woods’ disposal was a touch raw at times, but her pure size allowed her to have a say on the contest throughout.

PEEL Thunder have won their first WAFL Colts premiership in 17 years, holding off a late comeback to down minor premiers West Perth in a hard fought decider at Leederville Oval. Victorious ruck Jackson Broadbent took out best afield honours, and is among the prospects we cast a scope over in the latest edition of […]

GOLD Coast Suns Academy enjoyed a couple of big wins over Brisbane Lions Academy in two very different games last week for the AFLW Under 16 Championships. There were a number of impressive eye-catchers and we took a look at a high number of talented players from the Suns Academy who caught the eye. GOLD […]