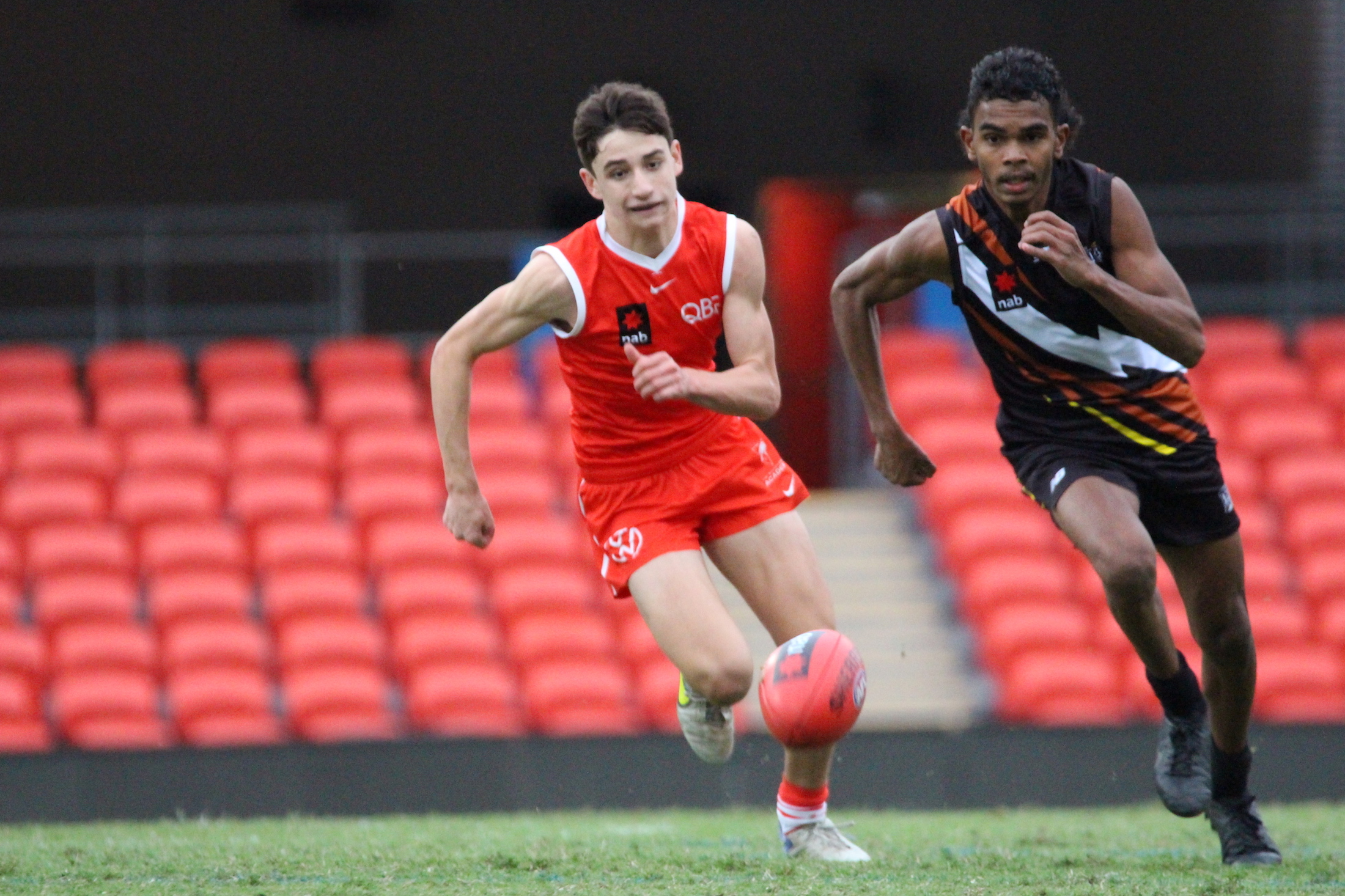 SYDNEY Swans Academy proved too strong for Northern Territory in a battle of the Round 1 AFL Under 16 Championship losing sides. The Swans started strong with the first three goals of the game, then inaccuracy struck and the red and whites missed a number of gettable chances including some posters. Northern Territory kept at it throughout the game, but the visitors proved too strong in the end, overwhelming them with a high-volume of inside 50s to post a 11.16 (82) to 9.11 (65) win.

Sydney slotted 3.7 to 1.2 in the first term and realistically should have held a five-goal or more lead, but inaccuracy hurt the Swans and just kept the door ajar for the Thunder. Northern Territory regained some control in the second term, but were still outplayed by the likes of Jack Roberts (three first half goals) who they had no answers for. The Swans continued to put the foot down and put the exclamation mark on the result with 4.5 to 1.1, of which the Thunder’s sole goal came with the last kick of the quarter.

Though the danger signs were there for the Thunder in the third term, to the Northern Territory’s credit, the players never gave up and even looked a threat late in the game, slotting the last six goals of the game to come within 20 points, but it was too little, too late. Swans Academy had built enough of a lead thanks to Roberts’ four goals and two from Hunter Pickett and Archie Christie-Day. Hard running winger Zachary Nandlal and tall forward Toby Loebel also impressed. For the Thunder, Waylon Davey was electrifying with three goals – two in the last quarter – while Orlando Turner kicked two, and Edwin Nyembo produced a four-quarter effort.

Finishing the game with a couple of goals, Turner looked dangerous in the forward half. After having a couple of inside 50s and putting them to dangerous areas, Turner took a two-grab contested mark and slotted the set shot from 40m, then backed it up with a second major in the final term after marking inside 50, 30m out.

The exciting talent easily caught the eye with his natural talent and X-factor when inside 50. He provided a leading target inside 50, but found the going tough with his side’s entries. He spent time through the middle and showcased his aggression, which sometimes crossed the line and gave away a few free kicks. When getting a sniff on goal he always looked like kicking it and finished with three majors, two being miraculous majors in the final term. One was a dribbler from the pocket that somehow bounced through opponents, and the second being one in congestion spinning around and snapping it home. He does not quite have the full four-quarter influence yet, but he only needs a split second to do a lot of damage.

Playing a bit of everywhere, Nyembo had a real impact on the game and was a four-quarter performer. He won the ball mopping up in defence, even had a couple of chances on goal, and burst through the middle at times, such was his ground coverage. He has a nice burst that sees him sidestep opponents and had a shot on goal in the second term but it just fell short. He kicked one in the last quarter after a good mark and set shot, but equally did some nice things in the back half. Quite often it involved intercept marking and driving the ball down the ground with some success.

Started the game lively and impacted it in the front half of the ground, Bauer kicked his goal following a clever out-bodying of his opponent and slamming the goal home from a metre out. He continued to get involved and provide a link in transition, winning a free kick in the middle of the ground at one stage for his attack on the ball. He had another flying snap on goal following his major but it just missed and went to the left.

Not needing a lot of the ball to have an impact, Guthrie did win a fair bit of it at different times. Most notably though, he was able to win it from either congestion or out in space via handball receive, and kick inside 50 to put pressure on the Northern Territory defence. His skills were generally clean, with his kicking going low, and his handballs effective in close. One of a number of Swans midfielders on top in the first half, he was certainly productive.

Working hard up and down the ground, Nandlal came alive int he third term collecting plenty of the ball. He often was under pressure and forced to rush his touches, but when he had time and space he was able to produce nice weighted kicks. He won the ball in defence, and up the other end, getting on the end of a passage to pick it up cleanly inside 50 and snap a goal which was helped through by a teammate’s shepherd. He continued to work hard and was doing his best across four quarters.

The lively forward looked dangerous inside 50 with his leading patterns and strong hands a feature of his game, Pickett had an early set shot from 50m that made the distance but was just touched on the line. That was followed up by two goals in the second term, taking a strong grab 15m out and nailing the set shot off a nice leap, then kicking his second by keeping it in play in the goalsqure from a long set shot, and snapping over his should. He kept leading out hard, and did miss a couple more set shots including one out on the full, but did push up to the wing at times to get involved and be a target.

Providing a strong marking target, particularly in the first half, Loebel did not actually hit the scoreboard, but not through lack of effort. He had a couple of set shots in the first term, but one hit the post and the second was an awkward high leg kicking action that also missed to the left. He kept getting up the field, and even marked a few times at centre half-forward and bombed the ball up the other end of the field. Loebel was not afraid to link-up with teammates in transition and showed he could move out of trouble, with a nice spin in the third term, but his snap on goal hit the post again.

Best on ground in the first half and realistically for the game, Roberts was enormous with four goals, including two in the first quarter. The Thunder had no answers for the 184cm talent who played like a tall with incredibly powerful hands, taking a number of strong contested marks. It is how he slotted his first two goals, leading out, marking cleanly nad making no mistake. He almost had a third in the second term by clunking the grab, spinning onto his trusty left and slamming one home, only for it to be touched on the line, though Pickett kept it in and goaled. He did kick his third from another lead and set shot, before his fourth came in the third term, dribbling one home from 10m out by getting to the right spot at the back of the pack.