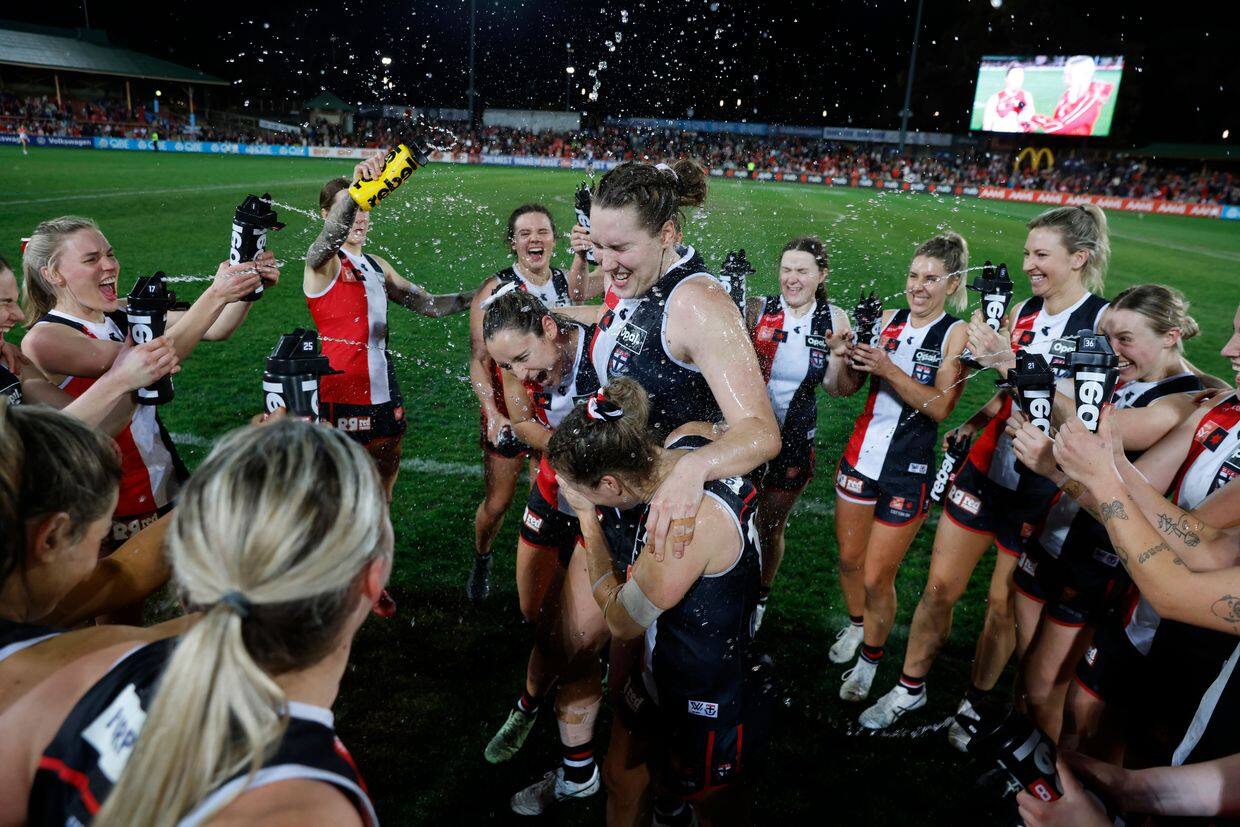 ONE of two clashes between undefeated sides in Round 3 of the AFL Women’s, the St Kilda-Melbourne game is perhaps not quite highly as anticipated as their Geelong-Collingwood counterparts. While the Cats have improved to the level where a home game against the Pies is deemed a winnable one, the Saints – despite ticking off two wins from two games – are not quite considered in the same range as premiership contenders, the Demons. But just how can St Kilda cause a massive upset and remain undefeated?

WHAT DO THE DEMONS DO SO WELL?

Melbourne is considered a premiership contender for a reason. The Demons have not only notched up two wins, but done it against two potential top four rivals in Adelaide and North Melbourne. Though falling behind at times in the second half through both games, the Demons have the mental strength to find a way to win. That in itself is a great quality to have, but what is it that Melbourne does, which sets itself apart from the rest?

Melbourne is a side that has no problems holding onto the ball and waiting for the right moments. The Demons have won 117 more disposals than their opponents, a remarkable feat given both the Crows and Roos are normally known as big ball-winners. They rank first in handball differential and sixth in kick differential, making sure they control the play.

One aspect of the Demons game that has changed this season is the additional focus on moving the ball by hand. In Season 6, 58.4 per cent of Melbourne’s disposals were kicks, that has dropped to 54.2 per cent. Though a subtle difference thus far, it shows that the Demons are willing to break the lines and find the outside runners.

It is hard not admire what the Demons have done with their gamestyle that allows them to get it away from the stoppage game and to the outside. Their biggest rivals Adelaide, Brisbane and North Melbourne are all highly contested sides, so the Demons wanted a point of difference, and they got it. Having recorded 306 uncontested possessions – 52 more than the next best in GWS GIANTS – the Demons are dominant in that area.

Though not able to be judged off a stats sheet, the Demons have so many players that can roll through different positions. Alyssa Bannan and Kate Hore played through the midfield in the win over North Melbourne at times, while Tayla Harris even spent time in the ruck. It gives coach Mick Stinear the option to switch the magnets around if Plan A is not working.

HOW DO THE SAINTS GIVE HELL TO THE DEMONS?

St Kilda might have the same amount of wins as the Demons, but the Saints’ victories have come over two expansion sides in Hawthorn and Sydney, who are, in fairness to those squads, likely to be in the bottom few spots on the ladder. When the Saints face off against a far superior and more seasoned opponent to their first couple of rounds, can their gameplan hold up?

KEYS TO SHUTTING DOWN THE DEES

Win the ball at the contest

This is a non-negotiable for the Saints. They simply have to beat the Dees when the ball is in congestion. They have enough quality at the coalface to get it done, with the likes of Tarni White – who is in All-Australian form – Olivia Vesely and Rosie Dillon all strong ball winners there. The Demons have winners across the park, but if the Saints can get on top in that area – one where they can potentially be equal or even better them on paper – than that is the first step.

Melbourne thrives off control and being able to not only win the ball, but keep it off the opposition going forward. The Saints need to bring the heat if they are to stop the Demons. Unlike less experienced sides, St Kilda cannot give the Demons meterage by cheap kicks, because they can explode by hand in an instant and get it forward very quickly. Similarly, Melbourne is ranked fourth for marks, which is something the Saints have to try and limit, and force the ball to ground.

In the first two rounds, these two sides are ranked first and second respectively for inside 50 efficiency. The Demons score 58.5 per cent of the time they go inside 50, while the Saints do it 57.8 per cent of the time. With two key targets inside 50 in Kate Shierlaw and Caitlin Greiser, the Demon defence of Libby Birch and Tahlia Gillard will have their hands full. The Saints have to make the most of their chances when going in there.

Not panic and bring the heat

First and foremost, the Saints simply have to remain calm across four quarters. They head in as the underdogs and the pressure is all on Melbourne. In front of home fans at RSEA Park, most Saints supporters just want to see four-quarter effort. Right now the Saints are ranked first for tackles inside 50 (plus-35) so if they can keep it inside 50, it puts the pressure right back on the Dees.

While it would take a very brave person to tip the Saints against the Dees, the brand of football St Kilda has brought in Season 7 is much improved on Season 6. If the Saints can win the clearances, limit the easy ball and lock it inside 50 without allowing easy exits, then they can dare to dream. It will not be easy, and expect Melbourne to come at them with everything, but it is the first big test for the new-look Season 7 Saints.