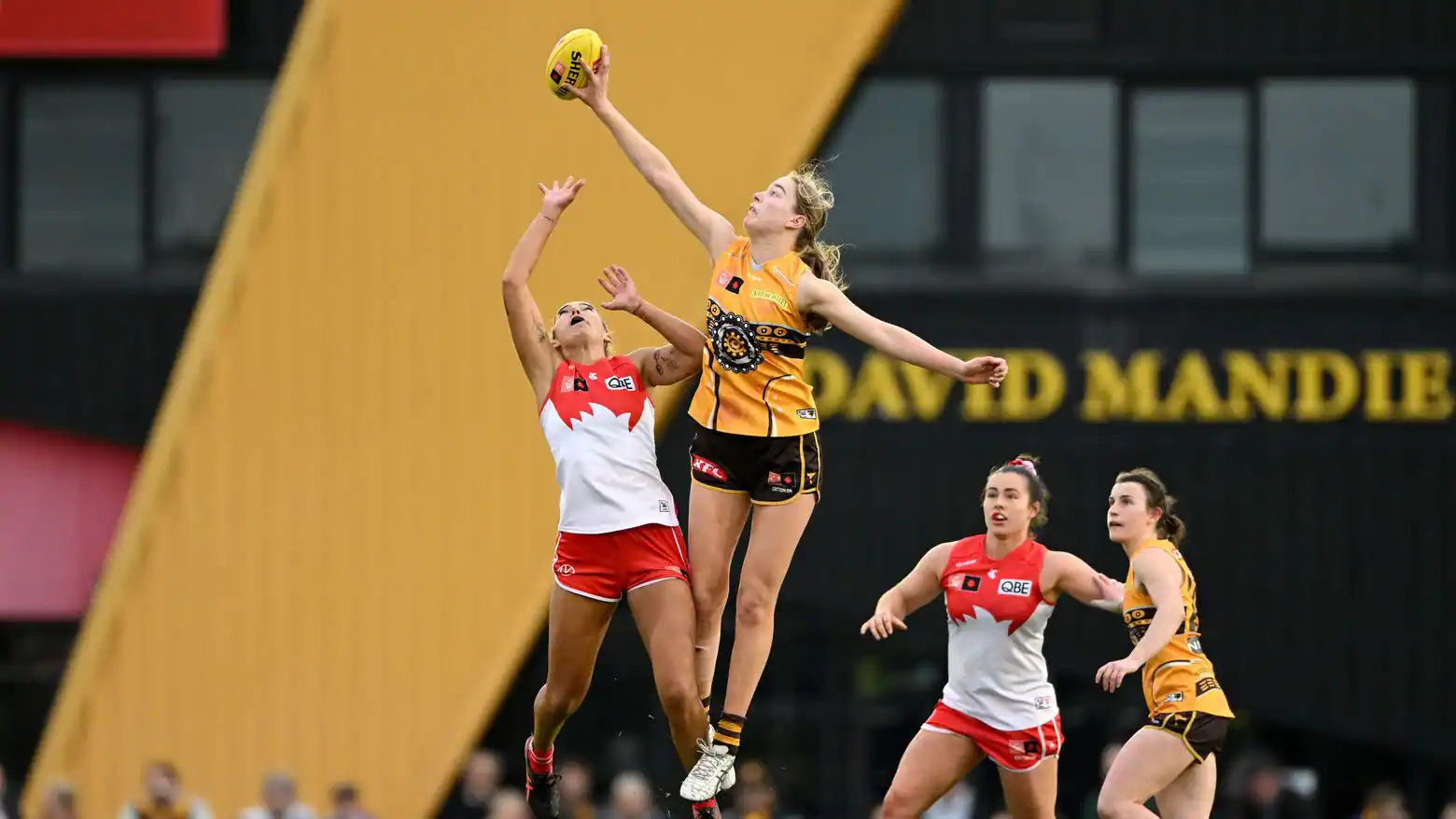 IN our new series of Player Focuses, we are taking a specific look at one of the Rising Star nominees each week, and their nominee worthy performances.

This week’s focus is on Lucy Wales, who played a key part in getting Hawthorn to their third win in a row.

At the first centre bounce of the quarter, Wales did not quite have the leap advantage on Olivia Levicki, but made up for that by getting the better body positioning.

It was a more even battle between the pair at stoppage ball ups, with neither really getting a height or body positioning advantage.

Wales was more used in defensive 50 and between the 50m arcs, but with other tall targets in the forward line like Sarah Perkins, it is easy to see why Hawthorn did that.

With Hawthorn under a lot of defensive pressure early, Wales certainly had her work cut out for her.

She was used as the tall last line of defence, while also providing a tall target for defenders to kick to as the Hawks transitioned out of defensive 50.

She did give away a holding infringement in a marking contest which resulted in Port’s goal, but as she had to battle Jade Halfpenny in the ruck later in the quarter instead of Levicki, she began to get more of a height advantage in the ruck contest.

It was a quiet quarter from and for Wales.

With the ball lodged in Hawthorn’s forward line and Wales continuing to not be used as a ruck in the forward line, there was not too much for the young ruck to do.

However, it was not a completely quiet quarter for Wales, with a couple of key influencing plays from her.

She took a very nice intercept mark on forward 50, and also later in the quarter laid a tackle on Levicki that resulted in Wales earning a Holding the Ball free kick.

Much like in the first quarter, at the first centre bounce of the quarter Wales did not quite have the leap advantage on Levicki, but made up for that by getting the better body positioning.

In the quarter she really showed how she can tap the ball in multiple directions, which gives her another weapon at her disposal, particularly if her opposite number gets better height at the ruck contest.

Again like the first quarter, the around the ground battles were pretty even but Wales did for the most part get the better body positioning more often than Levicki did.

She also took a lovely intercept mark on the last line of defence, and both earned a free (held without the ball) and gave one away (ruck infringement).

It was an even first tap of the quarter but that, as was the case for much of the around the ground taps was thanks in large part to Wales’ ability to get front body position.

Also like the first quarter, she was an interceptor on the last line of defence, and both earned a free (ruck infringement) and gave one away (holding the ball).

She once again provided a key target for defenders to kick to as they were coming out of defence, but she was not always able to mark it in the pack that formed around her.