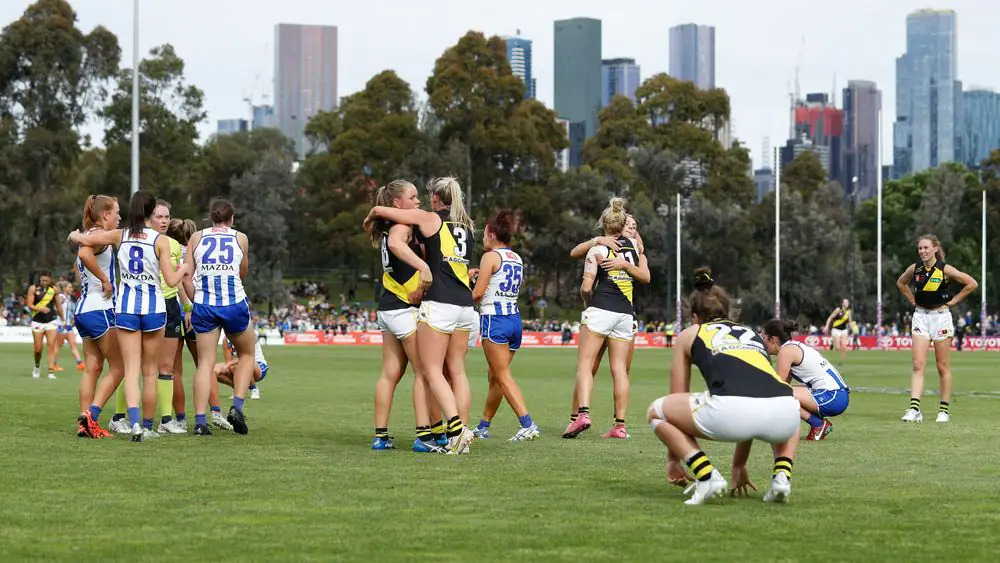 JIUST one of the three final day matches had AFL Women’s finals ramifications, but it was a big one that lived up to expectations. Richmond and North Melbourne drew for the Tigers to scrap into the top four and the Roos finish eighth, while in the other games, Essendon knocked off Port Adelaide by 27 points, and GWS GIANTS finished off their season with a 12-point home win over Gold Coast.

Essendon finished its season off on a high with a 27-point win over Port Adelaide to officially top the expansion sides on the ladder. Holding the Power goalless at Alberton Oval for three quarters, the Bombers booted 5.7 (37) to 1.4 (10) in the wet to grab their fourth victory of the season.

Inside 50 efficiency the key

Both sides were fairly even in terms of their inside 50s, with the Bombers just shading the Power by two (24-22). The key difference came in the efficiency once inside 50, with Essendon producing 14 shots for 12 scores, while the Power had seven shots for just five scores. Though the weather affected scoring, Essendon was able to capitalise more inside 50 and it turned out to be the biggest factor in the game.

It was a promising sign for the future if Port Adelaide can become more consistent in the front half, with the Power dominating the clearances. Racking up 25 clearances to 14 – including 7-3 from centre clearances – Port Adelaide took control in there. Though it ultimately did not help the Power put a winning score on the board, Abbey Dowrick and Jacqui Yorston both topped the match with five, while Olivia Levicki and Erin Phillips had four apiece.

Prespakis edging towards another W Medal?

Though it should come as no surprise, Madison Prespakis continued her wonderful season in the red and black, and would likely have picked up another three votes yesterday. Notching up a game-high 24 disposals, but also laying eight tackles, Prespakis was not as dominant at the clearances, but provided a whopping 399 metres gained, the most of any player. She also had five inside 50s and four score involvements making her presence known.

Williamson stretched off after tackle

First-year player Lily-Rose Williamson was on the receiving end of a fierce tackle with her arm pinned early in the fourth term from Maria Moloney. Though it was unfortunately incidental, as Williamson tried to breakthrough the tackle, she lost her balance and landed on her head, with teammates and medical staff rightly concerned and taking her from the ground.

Richmond won the battle for fourth against North Melbourne in perhaps the most unconventional way the Tigers could have, drawing with the Roos in the final round. Having to split the points, Richmond’s 4.3 (27) to 3.9 (27) draw was enough to leapfrog Geelong into outright fourth, while the Roos stayed in eighth and headed to an elimination final.

Both Richmond and North Melbourne had already secured their spots in the Season 7 AFL Women’s Finals series, and both teams showed why they entering the November post-season series. Richmond had been on a tear since dropping its first two games, winning seven straight, while the Roos had conquered all those bar the top three sides. In the end, a slow start and inaccuracy cost the Roos, with the Tigers taking home the chocolates, and the double chance.

Yassir seals double chance for her side

Young gun and second season player Emelia Yassir was the toast of Punt Road, after the teenager managed to secure the draw, and therefore the double chance for the Tigers. In a couple of memorable moments in the last 90 seconds, the tenacious Tiger bowled over Ash Riddell at speed inside 50 to force a stoppage. Then, after Courtney Wakefield‘s set shot from a high free kick at the next stoppage fell short, Yassir punched the ball across the line for a rushed behind to level the scores. The 19-year-old had the game smarts and awareness to know a draw was enough for the Tigers to progress through to the top four.

Tigers defence holds up under pressure

It was tough work for Richmond’s back five all day with the Kangaroos fiercely attacking, particularly late in the contest. North Melbourne had 35 inside 50s to 22, but credit to the Tigers’ relentless pressure, the Roos could only conjure up 13 shots, just three more from the Tigers. Booting 1.5 in a frustrating third term did not help the Roos’ cause, but it was the slow start that cost them. Richmond found the going tough throughout the day but made the most of its chances.

Richmond chose to hone Meg Macdonald‘s defensive focus in on red-hot midfielder Jasmine Garner in the crunch game, with Macdonald following her around throughout the day. Though the Rigers only had the five touches, she laid seven tackles and kept the star Roo to her lowest disposal tally of the season – 13. It was just the second time all season that Garner had recorded sub-20 touches, and instead it was up to Ash Riddell and Mia King to step up, while Jenna Bruton also had a game-high six clearances and booted a goal. Monique Conti put in another strong performance with an equal game-high 21 touches, as well as nine tackles.

The GWS GIANTS have ended their season on a nice high, defeating the Gold Coast Suns by 12 points. It was a happy evening of Cora Staunton in her 50th match and Tanya Hetherington in her last, as the GIANTS played arguably their best game of the season to get the win.

Dead rubber? Try telling that to the GIANTS and Suns

This contest may have had no impact on the race for the finals, but by the way the GIANTS and Suns were playing, it was far from a dead rubber. It was a fast and fierce contest from the get go, with plenty of fierce tackles and exciting play right the way through the match.

A GIANT who finished her break out season on a real high was Georgia Garnett. The young forward booted three majors, proved to be a really strong marking target up there for the GIANTS and really showed why she is going to be such a star for her team for years to come.

As has been said on a number of occasions this season, Alyce Parker had another outstanding day at the office. Finishing with the 24 touches and a whopping eight tackles, she provided a lot of drive through the midfield and was one of the best in orange in what really was a stellar team performance from the GIANts.

A stalwart in orange retires

As hinted by Alicia Eva at half-time, there was a retirement in the GIANTS camp post-match, and it was none other than the stalwart Hetherington. The star defender has been a stalwart of the GIANTS side for a number of years, and retires with 46 games to her name.

After an inconsistent first couple of seasons in terms of game time, Ashanti Bush really shone for the Suns in the loss. She only had the five touches, but really made them count, booting two majors and proving to be really lively up forward in a Courtney Hodder-esque way.