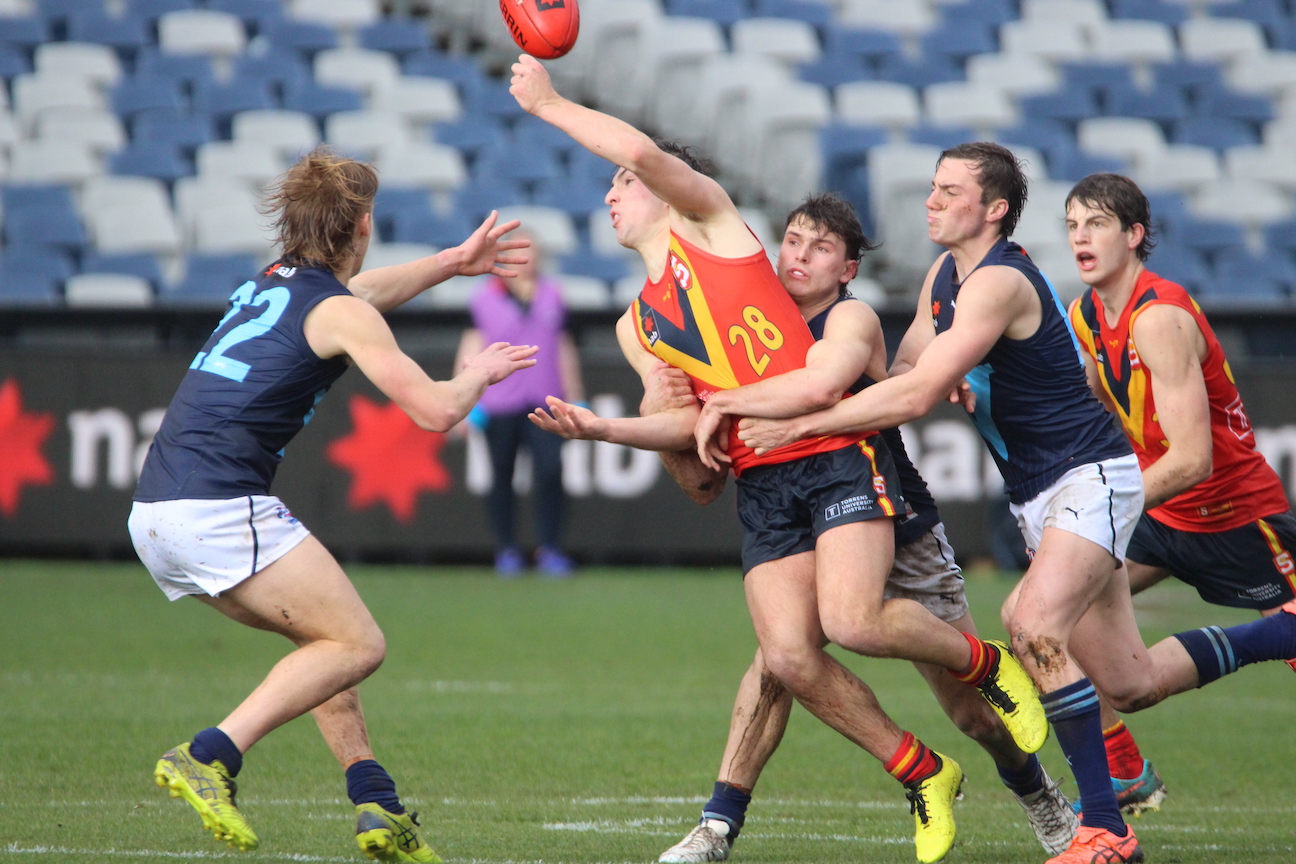 SNAPSHOT: “A contested ball-winning beast who has been a top performer at every level.”

There’s not much that Adam D’Aloia hasn’t achieved in his junior career. In 2021 he was best on ground in the SANFL Under 18 Grand Final, leading his side to victory against a more-fancied Glenelg outfit. He captained South Australia at State Under 17 level and performed strongly as a bottom-ager for South Australia’s Under 19 side.

His 2022 campaign was once again filled with outstanding performances and individual accolades. As captain, D’Aloia was named South Australia’s MVP at the Under 18 Championships and won the Team First Player Award for good measure, before also taking out All Australian honours. Although a SANFL League debut eluded him, D’Aloia dominated at every level and established himself as one of Woodville-West Torrens’ best players in their Reserves side.

D’Aloia has a strong appetite for the contest and is an elite first possession winner. He’s also willing to get his hands dirty defensively, and is capable of laying some big tackles. A relentless competitor who wills himself to have an impact on the contest, D’Aloia has been a model of consistency throughout his junior career, while also demonstrating qualities of strong leadership and professionalism.

D'Aloia has proven to be one of the premier inside midfielders in this year's draft pool, with a game built on hard work and competitiveness. There are few, if any, that have demonstrated a greater ability to win the ball at stoppage. Throw in his ability to free his hands and distribute cleanly to teammates on the outside, and you have one of the most impactful players in this year's class.

Far from just a ball winner, D'Aloia has displayed a commitment to impacting the game defensively across his entire junior career. His pressure around the contest is top tier and his ability as a tackler makes him a tough opponent for any opposition player.

What makes D'Aloia so impressive is his ability to bring the same level of intensity and commitment to every game, regardless of the level or opposition. This level of consistency has become a trademark of his junior career. It's just incredibly rare for him not to be one of his side's best performers on any given day. Being best on ground in the 2021 SANFL Under 18 Grand Final and South Australia's 2022 MVP of the Under 18 National Championships tells you all you need to know about D'Aloia's big game capabilities. His ability to rise to the level and stand up in big games and big moments cannot be questioned.

Based on performance and output alone, D'Aloia should be a first round selection with speed and athleticism the key separator between him and the other top midfield prospects. A lack of burst and explosiveness makes it challenging for him to get separation at stoppage, forcing many of his possessions to be under extreme pressure. While D'Aloia does a fantastic job of absorbing that pressure and executing by hand, some improvement could be made on his kicking in similar situations.

It's hard to believe D'Aloia won't find a way to make an impact at AFL level. If he's given the opportunity and experiences some improvement athletically, the South Australian skipper will likely represent great value wherever he lands on draft night.

With D’Aloia, you’re getting consistency, elite stoppage work and defensive pressure at the contest. Arguably the only thing holding him back from having an impact at AFL level is his athleticism and hurt factor by foot. An AFL program that seeks to improve his speed and running capacity will go a long way to readying him, with his strength and stoppage craft a strong chance to translate at the next level.