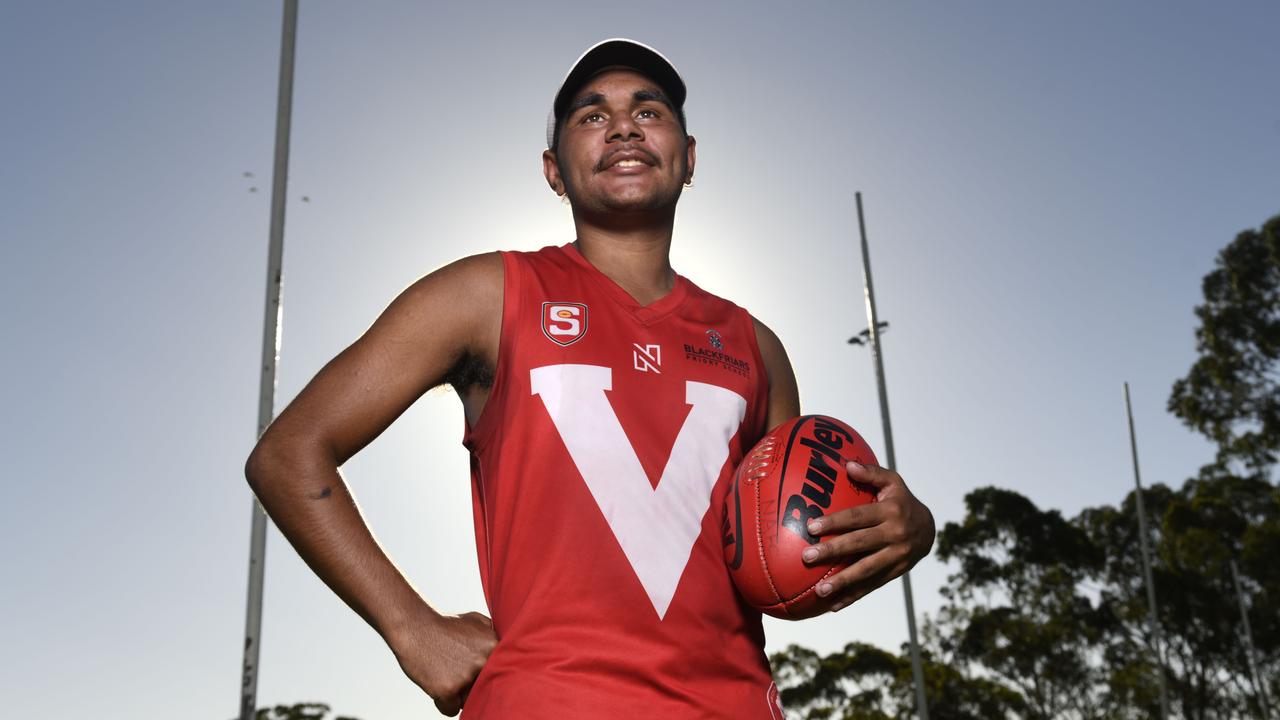 Blayne O’Loughlin is a crafty small defender who has been one of the most consistent performers in the SANFL Under 18 competition across the past two seasons. The nephew of Sydney Swans champion Michael O’Loughlin, Blayne is eligible to join the Adelaide Crows as a member of the club’s Next Generation Academy (NGA). O’Loughlin impressed last season with the Roosters as a bottom-ager, finishing fourth in the McCallum-Tomkins Medal count. His strong form and consistency continued into 2021, averaging 35 disposals in the opening three Under 18 matches to earn a promotion to the Reserves side. He looked comfortable in the second-tier competition, playing three games there throughout the season and averaging 14 touches. However, O’Loughlin starred in the Under 18s, accumulating 20 or more disposals in all-but two matches. His Round 8 effort against Sturt solidified him as one of South Australia’s most talented juniors, collecting 42 disposals, 10 marks, seven inside 50s and seven rebounds in North Adelaide’s 102-point triumph. A model of consistency across the year, O’Loughlin thoroughly earned selection into the state Under 19 side, claiming SA’s best on ground honours in the second clash with Western Australia to cap off a terrific year.

O’Loughlin is an attacking-minded defender, who thrived with the Roosters when given the license to be creative off half-back and use his precise ball use to advantage. At both club and state level, O’Loughlin handled much of the kick-in duties, with the coaching staff clearly placing their trust in his foot skills over short and long distances. O’Loughlin is very much a kick-first player, and his teammates often look for him to set up the play from defence.

A left-footer, O’Loughlin has a number of different types of kicks in his arsenal. He can pick off targets from 45-50 metres away, use a deft touch to bring it back into the middle, or slice through opposition lines with penetration. The North Adelaide teenager has shown he has no trouble finding the ball, averaging 28.5 disposals (20.4 kicks) and 5.5 rebounds in 13 Under 18 matches this season. His consistency throughout the year has been admirable, playing an important role in the North Adelaide set up.

O’Loughlin combines his prolific ball-winning ability and clean kicking with terrific composure, poise and decision making under duress. He looks comfortable in confined spaces and evidently thinks his way through situations and looks for the best option, rather than taking the easy option by blazing away. When taking the kick-ins from full-back, O’Loughlin would often look to see if there is a better option in the centre before pulling the trigger short. Whilst he wasn’t as calm and composed in the first Under 19 Championships match with Western Australia in August, he improved the second time around and looked more in control.

The Adelaide NGA prospect has spent most of his junior career as a defender, but impressed for North Adelaide when given various stints on-ball. O’Loughlin is not outwardly explosive, but is capable of providing important run-and-carry and plays with hustle. He brought some much-needed energy to the contest when pushed up the ground and packs a punch when competing for the ball.

Standing at just 171cm, O’Loughlin’s size is perhaps his most glaring area of concern. Whilst it hasn’t had a major effect on the way he plays at SANFL Under 18 level, it could become more evident AFL level. Although his attacking strengths are appealing, clubs may also hope to see improvement from O’Loughlin’s defensive attributes. In the first meeting between the Croweaters and the Black Swans, WA forward Jesse Motlop got on top of O’Loughlin, as the defender was made to play a more close-checking role. Whilst he still provided SA with some serviceable rebound from defence, O’Loughlin was less assured defensively and can look to refine that area of his game to be a more well-rounded small defender.

O’Loughlin has pieced together a compelling resume across a number of seasons in the SANFL Under 18 competition. He has impressed with the Roosters, displaying terrific consistency, production and high levels of skill and smarts. O'Loughlin can be trusted to make intelligent decisions with ball in hand and boasts a number of important traits as an attacking-minded defender. Although he does lack some height and will need to improve the defensive side of his game to feature at AFL level, O’Loughlin’s craftiness with ball in hand is eye-catching and could see him attract a bid towards the latter stages of the draft. His Next Generation Academy eligibility will likely see him join the Crows, to provide the club with depth among its growing small defender department.