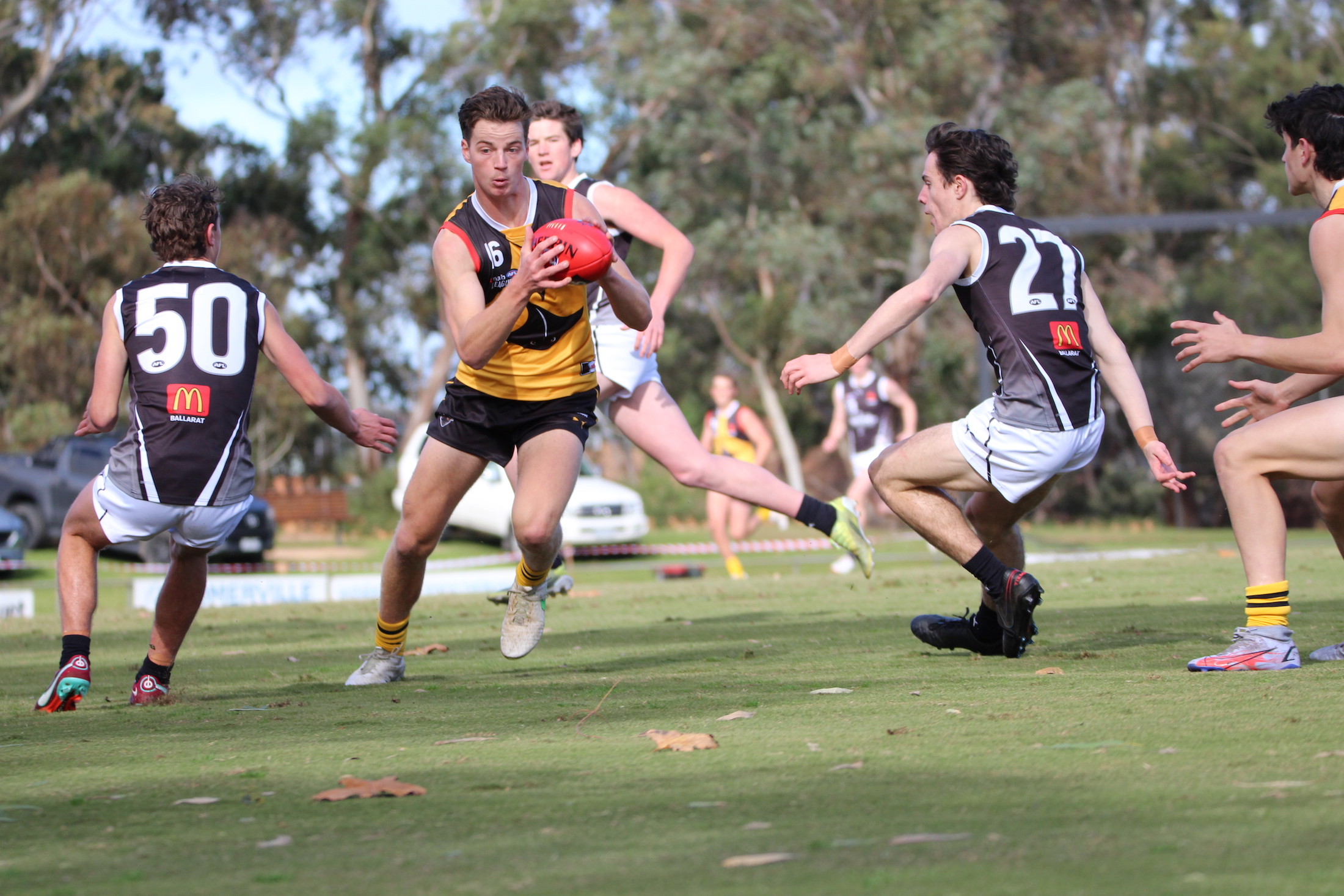 SNAPSHOT: “A clean and composed tall midfielder with uncanny spacial awareness and the ability to rotate to defence.”

The Hustwaite name has been synonymous with success in the Dandenong Stingrays region of late, with current draft prospect Henry following in the footsteps of elder brother Campbell – the club’s 2018 premiership captain.

Though the ‘Rays fell short of a second flag in five years, the junior Hustwaite has established himself as a genuine top level chance throughout 2022. The 18-year-old enjoyed a growth spurt which shot him up to 194cm, adding size to his sound smarts and stoppage craft.

Compared to the likes of Scott Pendlebury for his left-foot kicking and composure, Hustwaite perhaps runs against the grain of many traits which make a modern day prospect, but offers invaluable natural footballing traits which help him shine.

He turned out 12 times for Dandenong in this year’s NAB League season, earning an AFL Academy call-up and Vic Country honours along the way. He helped both the Stingrays and Big V to title deciders, starting off as a third tall behind the ball before being thrust into midfield and thriving en route to a National Combine invite.

Boosted by a growth spurt before his bottom-age season, Hustwaite now presents as a tall ball winner with high level stoppage craft. Though not as outwardly powerful as midfielders in the same mould at AFL level, his ability to navigate tight spots and manufacture clean exits is absolutely uncanny.

There are a few seperate, subtle traits which make Hustwaite so effective on-ball. First, he has the natural ball winning nous to rack up possessions, and is wonderfully clean in his handling. Once he gets ball in hand, Hustwaite is near-untouchable, fooling opponents with a deft shifts onto his left side, and knowing exactly where to release.

Though not particularly quick across the ground, Hustwaite has good agility to help him escape to the outside, or buy just enough time to find the right option. In those instances, and even while rotating to defence, his decision making is unflappable and disposal truly efficient.

Speaking of efficiency, Hustwaite ran at 73 per cent during this year's National Championships. He's a safe user of the ball, but may find improvement in enhancing his hurt factor. Hustwaite went by hand 62 per cent of the time this NAB League season, feeding teammates but perhaps limiting his ability to damage the opposition or hit the scoreboard.

Considering his size, that factor and his lack of real speed are a couple of areas which fly in the face of what recruiters have typically looked for in recent times. Nonetheless, Hustwaite's assets are valuable and his reliability makes him a relatively sound option.

A final point of contention with Hustwaite is his versatility. He proved himself as a distributive third tall defender early in the year, and though he has some improvements to make in his expansive kicking, has the aerial ability to play there. The question mark lies in his ability to go forward, with only one goal this season, but such terrific midfield craft that he arguably does not need to play anywhere else.

Hustwaite seems to be a prospect who divides recruiters. On one hand, his footballing ability puts him well within first round contention, but on the other hand, he doesn’t quite suit the athletic prototype of modern day footballers. Although, that didn’t bother newly crowned Brownlow Medallist Patrick Cripps. Ranked 16th in Rookie Me Central’s October Power Rankings, he may well find a home within the top 20, but could just as easily be a value pick in the second round.