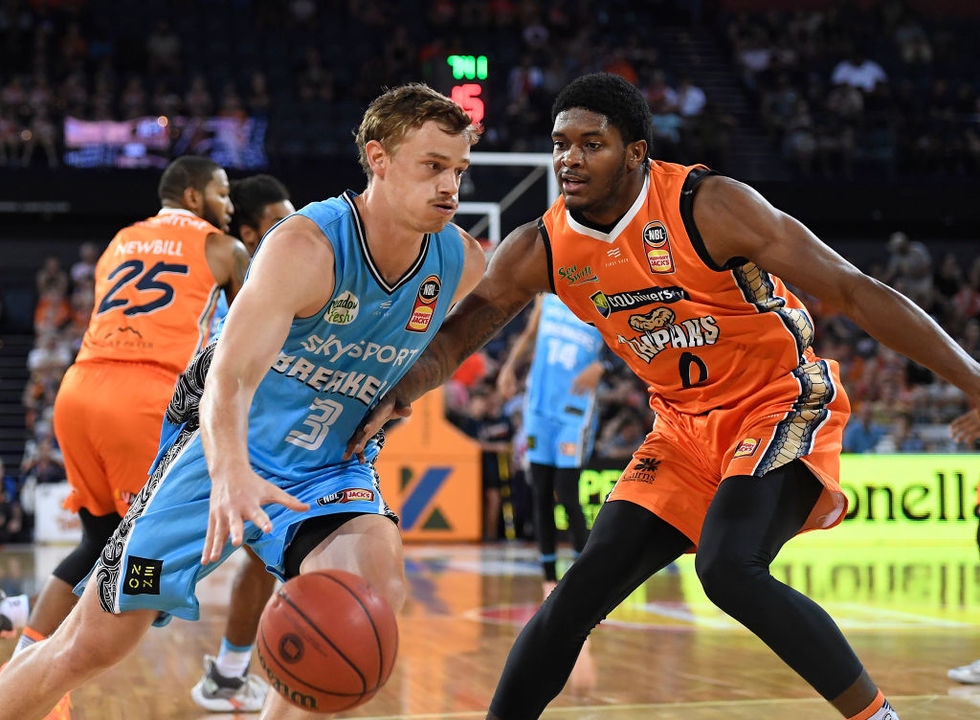 WITH one win separating the first placed Sydney Kings and second placed Perth Wildcats a loss in Round 15 could see a new ladder leader. The battle does not stop there with a mere three wins separating third from eighth meaning each game this round could alter the ladder and shape the finals race.

At the start of the season not many would have expected this to be the game of the round but both sides are coming in hot and are looking to extend their respective winning streaks. New Zealand have won their past five games while the Taipans have made it four from their last five making it a tantalising Thursday night battle. The Breakers have been dealt their fair share of struggles throughout the season but have found the winning formula in the last couple of rounds and will want to keep that momentum going if they are to make finals. Scotty Hopson has been key for them hitting the scoreboard time and time again while Tom Abercrombie has shown his worth recording a team-high 24 points in their last outing. The likes of Finn Delaney and Robert Loe have also been important for the Breakers with the duo combining nicely across the court. In front of a home crowd expect the likes of Scott Machado and Cameron Oliver to stand up and relish the pressure. Both know how to put on a show with their rangy shooting while Oliver has proven he is an asset coming off a strong performance of 12 rebounds and 21 points. It will be a tight battle and with plenty on the line expect the Taipans and Breakers to leave no stone unturned to secure prime position on the ladder.

It has been a testing year for the Illawarra Hawks who have been dealt a handful of injuries to key players and struggled to make a real splash. On the other hand, the Wildcats have continued to go from strength to strength despite suffering a shock loss last round. The Hawks have put up a strong contest week in, week out but have fallen short and with the Wildcats looking for redemption could be in for a tough match. Bryce Cotton has been up to his usual tricks shooting from anywhere and most importantly capitalising, making him a real danger man for the Hawks. If he and Terrico White can get off the chain early they could pose a dominant threat and cause havoc for their opposition given their scoring prowess. Another key player to look out for will be Nick Kay who can have a profound impact if given the time and space. The addition of NBA star Miles Plumlee will provide further depth, class and firepower to an already stacked Perth line-up. Illawarra will once again be without star recruit LaMelo Ball who has proven to be a real game changer and will be sorely missed in the clash given his tenacity, class and flashy gameplay. Josh Boone has made a splash in recent weeks along with Todd Blanchfield but if the Hawks are any chance to get over the line they will need big performances from their star players.

The top of the table Sydney Kings will be aiming to extend their lead, taking on the Taipans who have put their hand up for finals contention. Cairns have been in hot form in the past month but having played one game already this round could suffer some fatigue, something they cannot afford to do against a slick Kings outfit. The Kings have a plethora of star power both on the court and bench with Casper Ware the main instigator when it comes to scoring. Ware can explode out of the blocks with his dynamic movement and hustle to get in tight and attack the boards, meanwhile big man Andrew Bogut is a prominent threat for the Taipans given his stature and basketball nous. Throw in Jae’Sean Tate and the Taipans could be in for a real battle but have proven on more than one occasion that they can mix it with the best in the business. DJ Newbill is as experienced as they come and is a real leader for the group using his skill and body positioning to get within scoring range or gobble up rebounds. Fellow Cairns teammates Machado, Oliver and Nate Jawai must weather the storm that is the Kings and bring their signature play to the table to topple the ladder leading Kings in what could be another enthralling battle.

Expect plenty of excitement on Saturday night with both sides coming off important wins and looking towards the finals. Melbourne United had a slow start to the season unable to string consecutive wins but have found some form as of late, claiming victory in three of their past five games and will be looking to consolidate against Adelaide. The 36ers had a mixed bag of results in Round 14 and will be looking to potentially leapfrog the Taipans if they are held winless this round. It will be an interesting battle with United having a wealth of options to choose from and headlined by former New Zealand Breakers star, Shawn Long who is in career-best form. Melo Trimble has been relatively quiet in recent weeks and will be hoping to have a big impact against Adelaide to get his side over the line. The combination between Chris Goulding and Trimble has shown to be impactful in the past with their dynamic style and ability to bounce off each other while Stanton Kidd came into his own last round in a dominant outing. The 36ers are not without their own weaponry in the likes of Jerome Randle who if left unattended can cause all sorts of trouble collecting 43 points last round across two outings. Eric Griffin is another key player for Adelaide, able to have an impact at the basket, while Daniel Johnson provides plenty of excitement.

In their second game of the round and back on home soil the Breakers will be hoping to make it two from two to cap off a successful week. The Bullets have had an up and down season to say the least but will be seeking revenge after a loss on the buzzer two weeks ago against cross-ditch rivals. The Breakers have shown class and composure under pressure in recent weeks to prevail in tight matches, but will have to bring their A-game against the Bullets who have Lamar Patterson. The forward knocked back 35 points last round and will be wanting to replicate his hot form once again to guide his team to victory. Nathan Sobey and Ej Singler showed their worth last round going to post and using their skill to mount pressure both offensively and defensively for Brisbane. The Bullets have a tendency to fade in and out of games but if they find the right time to strike they could fly home happy. Youngster RJ Hampton has his moments but if he can have a big game for the Breakers it could set the side up and make them a real threat with finals quickly approaching. Sek Henry is another one that could explode out of the blocks after a couple of quieter games.

It has been a disappointing past couple of rounds for the Phoenix who have simply fallen off the wagon making this clash with Hawks an interesting one. Although the Hawks have only registered five wins for the year they have shown glimpses of brilliance but have not regularly performed. South East Melbourne have struggled to maintain their consistency, putting together solid patches with key wins over higher ranked sides but then dropping the ball. Expect former NBA star Mitch Creek to be out for revenge after a quiet game last round only managing a mere 11 points by his lofty standards while John Roberson has continued to stand up and score freely no matter the situation. Roberson sunk 31 points in his side’s loss and will need support from the likes of Ben Madgen and Dane Pineau if they are any chance of winning against the Hawks. Illawarra will be looking for big performances from Emmett Naar and Sunday Dech who can both hit the scoreboard and apply defensive pressure with three steals collectively.