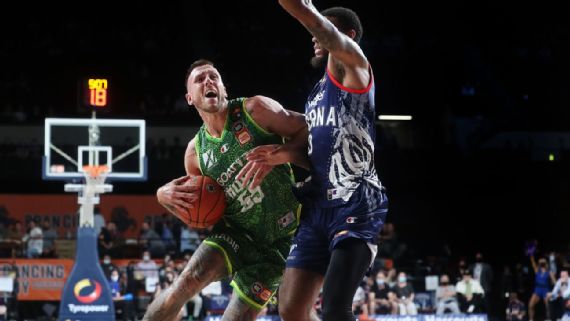 ROUND 14 of the National Basketball League (NBL)’s 2021/22 season kicked off on Friday night, with the Adelaide 36ers hosting the SEM Phoenix at Adelaide Entertainment Centre, and what a cracking way it started the weekend.

Despite the Phoenix entering this clash heavily favoured, and jumping out to an early lead, the 36ers were able to make this one heck of a contest, particularly due to the outstanding performance from Daniel Johnson. After trailing by a reasonable margin throughout the middle two periods, the home side rallied to fight back and even take the lead in the final term. However, Kyle Adnam was the hero for the Phoenix once again, drilling a late shot from deep to give his team a match-winning lead.

In this article, we take a look at some of the key statistical categories from the contest, and how they may have impacted the final result of the match.

As demonstrated by the final margin of seven points, this was an extremely close battle when it comes to the statistics. The teams nearly broke even in the nine categories we consider to be crucial in securing a win. The Phoenix were the more accurate team when it comes to shooting from the field, making nearly half of their shots. This figure was boosted by a high-scoring first term, where they were able to rally behind the sharpshooting of Mitch Creek.

They were also able to perform stronger in the rebounding battle, pulling down three more boards than the opposition. This makes sense given the 36ers were less accurate when shooting the ball, so the Phoenix had more oppoetunities for defensive rebounds. Leading this effort was big man Zhou Qi, who pulled down eight of the team’s 41 on his own.

The 36ers did actually end up performing stronger in more of the nine categories than their opponents, which demonstrates how close the contest was in the end. They were more deadly from behind the arc and also getting to the free throw line. These two scoring areas were a major catalyst for the comeback, but unfortunately, it was poor time management that let the side down in the closing stages.

The Phoenix were well-led by a terrific performance from their superstar in Creek, who was at his best in the win on the road. He had 19 points to half time, and was one of the big reasons as to why his side was able to build a big lead in the second and third terms. He ended up having a cracking battle with Johnson, who finished with a game-high 31 points despite the tough loss. It was essential viewing in the first term, when the pair traded long-range bombs in what was some of the most entertaining action of the year.