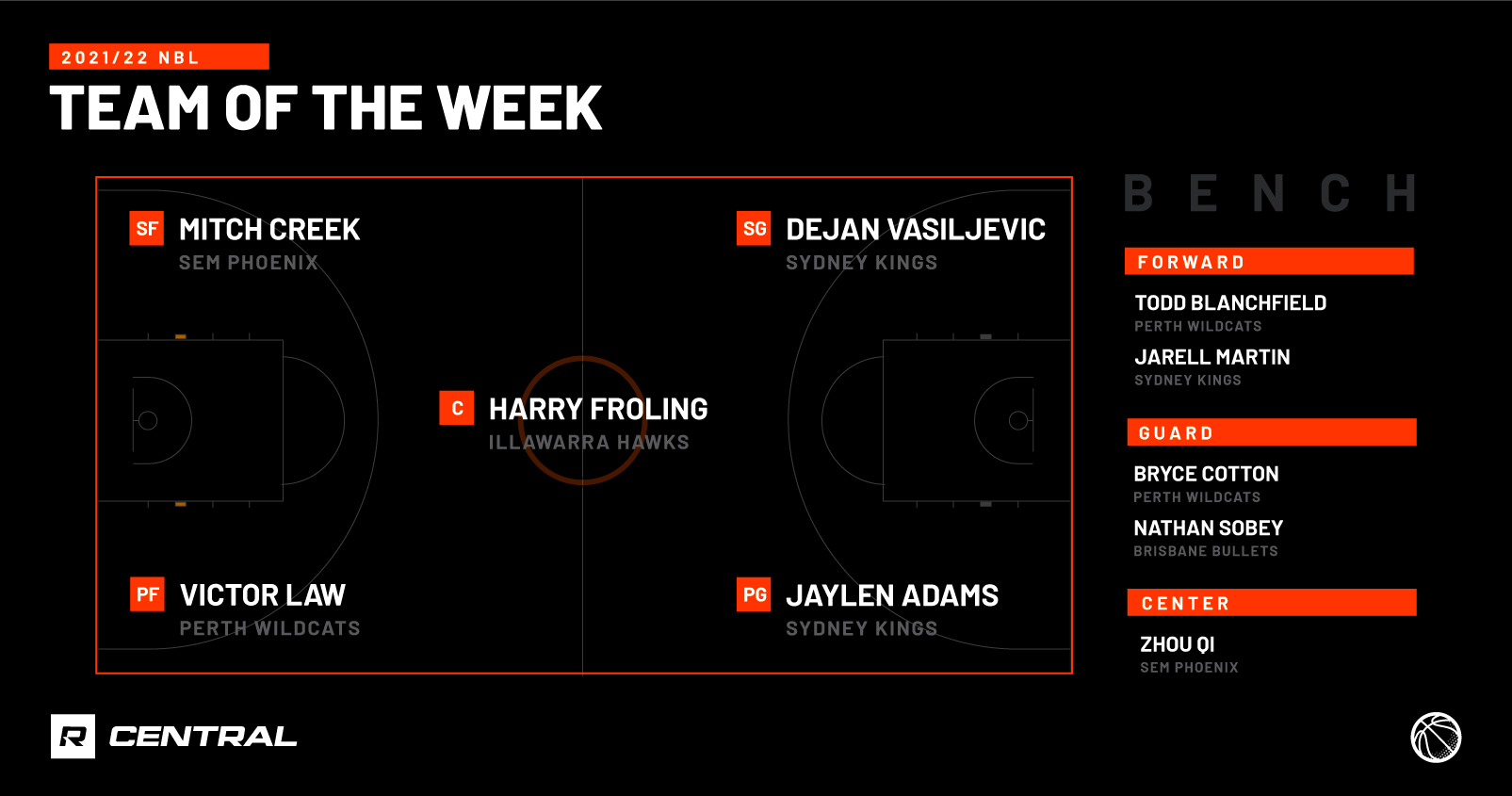 IN this series each week, we take a look at the strongest performing players at each position to create the National Basketball League’s (NBL) Team of the Week.

The eighth round of the 2021/22 NBL season wrapped up on Wednesday afternoon, concluding what was an entertaining batch of games. There were some big results in the context of the season, and many of these were led by some eye-catching individual performances. With the ladder beginning to take a rough shape moving forward, plenty of players are giving each outing their all to try boost their side’s chances, and it is showing on the court. This week sees a strong mix of fresh faces and familiar favourites as we highlight the best performers of Round 8.

In the Kings’ two outings this round, Adams was a valuable contributor to take his side to a 1-1 record for the weekend. They faced the Brisbane Bullets twice in the same round, and Adams performed strongly in both outings. The first saw the Kings fall to the tune of nine points after coughing up a considerable lead. Despite the result, there is no denying the impact of the point guard, who poured in a game-high 33 points (including seven shots from behind the arc) and seven assists. He battled hard right to the final buzzer, and was arguably the most damaging player on the court. He backed this up with 17 points, five rebounds and six assists as the Kings got their revenge on the Bullets with a 25-point win.

The second half of our Sydney Kings backcourt sees the inclusion of scoring machine Vasiljevic, who was also fantastic in both outings. After returning from a ruptured Achilles he suffered last season, ‘DJ’ produced some of his strongest performances since he came back into the lineup. In the first match, he proved a threat from behind the three-point line, delivering 21 points and five threes. This was followed up by a 23-point outing in the second clash, which also included five baskets from behind the arc. If he can continue to produce performances of this calibre, then the Kings might find themselves climbing the ladder in the near future.

The next spot in the starting lineup goes to the Phoenix forward, who continues to make an appearance in this series, but he’s making it impossible to keep him out. He had another two impressive performances in Round 8 as his MVP campaign rolls on, proving an incredibly difficult task for opposition defenders on a weekly basis. In his first outing of the round, Creek produced 21 points against the JackJumpers, demonstrating his class and experience against a young side. This was followed up by 26 points, eight rebounds and seven steals in a monumental two-way performance.

One half of the Wildcats’ star duo makes an appearance in the starting lineup, with Law back to his best in Round 8. Perth only played the one game this round, but Law made sure to make an impact in this time regardless. He faced off against the Hawks, in what was slated to be a blockbuster clash. The forward poured in 21 points, seven rebounds and two blocks in a terrific performance. He will be a key factor in his team’s championship quest, and performances of this calibre will be a massive boost.

It is hard to go past Froling’s massive outing against the Adelaide 36ers when it comes to talking about the best performances of the week. After a quiet performance against the Wildcats to open the round, Froling exploded in a match-winning effort on Monday night. Coming off the bench, he produced 27 points (with eight shots from behind the three-point line), nine rebounds and two stills in a magnificent performance. He was simply unstoppable from behind the arc, and has emerged as yet another weapon in Illawarra’s arsenal.

The back-up point guard spot goes to the second half of the Perth Wildcats duo in Bryce Cotton, who was again terrific in leading his offence. Against the Hawks, Cotton managed to break away from the defensive structures to pour in 24 points and four assists in a typically eye-catching offensive performance from the superstar guard.

Next up off the bench is league veteran Nathan Sobey of the Brisbane Bullets, who produced a terrific outing. Despite an inefficient second match, he caught plenty of attention for the Bullets’ first match of the round, where he delivered 30 points and five rebounds in an explosive offensive performance to lead his side to a big victory over the Sydney Kings.

The first forward bench spot goes to Todd Blanchfield of the Perth Wildcats, who was outstanding in his side’s win over the Illawarra Hawks. Blanchfield proved a spark off the bench, producing some serious offensive output to finish with 20 points and five rebounds in just 22 minutes of action. If he can keep these performances going, it will make the Wildcats even harder to stop.

The next backup forward spot goes to Sydney Kings gun Jarell Martin, who was as consistent as anyone despite his side splitting their results of the round. They played the Bullets twice, and in the first match, Martin produced a statline of 18 points and 12 rebounds (six of these offensive) in a gritty performance. He backed this up with 19 points and 12 rebounds a few days later in a strong showing.

The final bench spot goes to Zhou Qi of the South East Melbourne Phoenix, who was only able to play the one game this weekend. However, he made quite the impression in this match with 18 points and eight rebounds as his offensive game continues to grow. Pair this with his remarkable work on the defensive end of the court, and the Phoenix have found themselves quite the player.