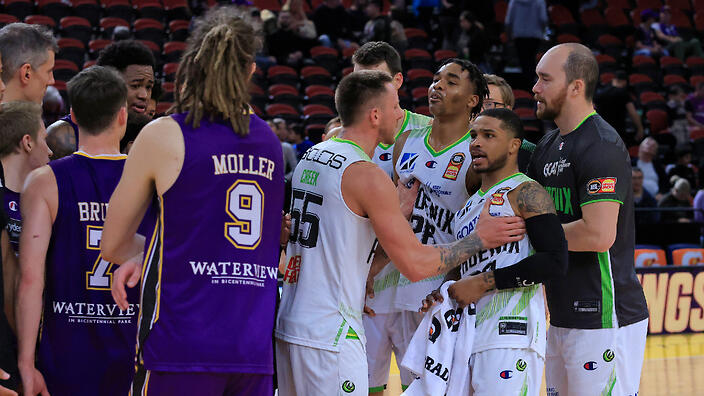 ROUND 15 of the National Basketball League (NBL) kicks off on Thursday night with the Phoenix and Kings opening the account. Melbourne United will be keen to hold onto top spot on the ladder while Perth is hot on their heels.

The Phoenix and Kings will lock horns for the second time in as many weeks with the Phoenix hoping to reverse their fortunes this time around. The two sides have had a chequered season so far registering three wins from their past five outings. South East Melbourne are coming into the clash on the back of consecutive losses while the Kings have strung together two wins and will be eager to make it three straight.

Mitch Creek is still the go-to man for the Phoenix averaging 20 points a game while also reeling in 7.09 rebounds and 3.27 assists each time he steps out on court. Kyle Adnam has continued his hot run of form boasting an average of 13.04 points while the return of Keifer Sykes has been important with the guard managing 12.93 points, 3.6 rebounds and 5.47 assists. Ben Moore is somewhat of an unsung hero for the Phoenix and will need to be at his damaging best to influence the outcome while the growing confidence of Cameron Gliddon and Yannick Wetzell is starting to come to the fore. Casper Ware was at his dominant best last week with a staggering 40 points and will be wanting to replicate those efforts against a classy Phoenix side. If Ware can get busy and receive support from Jarrell Martin who averages 17.88 points and 6.94 rebounds and Jordan Hunter (7.38 points and 5.83 rebounds) then South East Melbourne could be in real trouble given their capacity to score easily. However they will be without the services of Didi Louzada given his decision to join the New Orlean Pelicans in the NBA.

It will be a battle of the bottom two sides as the Breakers and Taipans go head to head. Despite holding last and second last place on the ladder, expect both sides to come out firing and lay everything on the line to claim a much needed win and restore a little bit of faith in their respective fans. Only one win separates the two sides with the Breakers just marginally ahead and looking to create even further ladder separation with a win here.

Tai Webster remains the Breakers most prominent shooter with an average of 19.35 points and has proven his class to have an influence off the boards with his 5.12 rebounds and six assists. Finn Delany is the other key candidate for New Zealand with his consistency paramount thanks to his average of 15.52 points and 6.29 rebounds. Levi Randolph has made a splash since joining the side coming off a 23-point, four-rebound and four-assist performance and will want to keep the good times rolling. The Taipans however have been landed a heavy blow with Cameron Oliver returning back home to the US and leaving a huge hole to fill. In saying that, they still have the services of Scott Machado with the livewire more than capable of leading the troops thanks to his average of 16.96 points, 3.52 rebounds and 7.26 assists. The Taipans will need support from Majok Deng, Kouat Noi and Mirko Djeric if they are to get over the line.

Perth suffered a shock loss last round at the hands of the Breakers and will be more than desperate to restore their winning ways against the lower placed Brisbane Bullets. Currently sitting a game behind from top of the table Melbourne United, a win here for the Wildcats could help close the gap and keep the pressure on as the backend of the season approaches. Brisbane on the other hand will be hoping to snap their two game losing streak and continue the theme of upsets going against Perth with a solid win here.

League points leader, Bryce Cotton is the one to watch for the Bullets given his ability to explode out of the blocks at any given time. He has proven that he only needs a short amount of time to change the course of the game with his scoring nous undeniable averaging 24.43 points along with 5.78 assists. Teammate John Mooney is another damaging prospect both on the scoring and rebounding from producing 12 rebounds and 17 points each time he steps out on court. Todd Blanchfield and Jesse Wagstaff are the others to keep a watchful eye on. For the Bullets the ever reliable Nathan Sobey is the most damaging prospect with his ability to work his way towards the rim averaging 22.91 points, 4.27 rebounds and 3.95 assists. Support from Lamar Patterson will be necessary if the Bullets are to worry the Wildcats while Matt Hodgson will also have to get busy with his average of 10.67 points, 6.72 rebounds and 1.22 blocks ticking along nicely.

Melbourne United are sitting pretty in first place and boast an eight game winning streak, a feat they will be hoping to maintain in their clash against the 36ers. Melbourne have re-found their form in the past couple of weeks meaning Adelaide will have their work cut out for them this round as they look to overrun the in-form side and keep their slim finals chances alive.

United do not have a shortage of players that are able to step up to the plate and command the ball and will once again need that contingent of players to gel to secure the win. Jock Landale is the main player in focus given his 16.35 point average to accompany his 8.35 assists and 2.57 assists with captain Chris Goulding also a consistent figure. Scotty Hospon is unstoppable when given time and space while Mitch McCarron has found his groove and will be eager to maintain that level of intensity as shown through his average of 11.26 points, 5.22 rebounds and 4.96 assists. Daniel Johnson is the main playmaker for the Adelaide producing 20.88 points a game and will need to be on song if he is to worry United. Efforts from Brandon Paul and rookie Josh Giddey will have to be high with the latter proving to be classy with ball in hand averaging 7.29 assists a game. Sunday Dech and Jack McVeigh will be the other two to keep an eye on.

The Hawks have dropped to fifth position on the ladder after two consecutive losses in Round 14 against the top two sides. Their job will not get any easier though, as they prepare to take on the Kings on Saturday but will be hoping that an element of fatigue plays a factor in their clash as Sydney enter their second game in as many days. Sydney could come into the clash on the back of a win and could be brimming with confidence meaning Illawarra will need to be on their a-game and to play with great confidence if they are any chance to not only secure the win but leapfrog back into the top four.

With Ware and Martin at the helm the Kings will need a wealth of support from their next tier of players. On the flipside the Hawks will be hoping that the likes of Justinian Jessup and Tyler Harvey can get busy and keep the scoreboard ticking over. Harvey is the most proficient shooter in the side with 19.83 points while Jessup is also handy thanks to his 14.86 points and 4.16 rebounds a game. Cameron Bairstow has come along in leaps and bounds this season and will be hoping to keep that momentum going as will Sam Froling who has found a level of consistency across the court for the Hawks. Justin Simon cannot be underestimated and if he is able to get off the leash could help get Illawarra over the line.

Each of these sides will enter their second game of the round with a bottom four clash between the Breakers and 36ers closing out the round. The Taipans have been dealt a difficult task having to combat the Perth Wildcats, but will have the bonus of a home crowd spurring them on while the Bullets and Phoenix are locked and loaded for Sunday afternoon