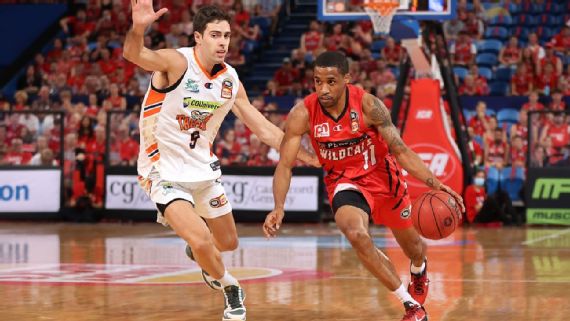 HEADING into Round 11 of the National Basketball League (NBL) Draft Central takes a look at some of the top performers so far. It is no surprise that a number of Perth Wildcats feature highly in the key statistical areas given their stranglehold over the competition at the moment while Melbourne United’s shared approach sees only a few players make the top five.

Guiding his side to multiple wins throughout the 2020 NBL season star guard, Bryce Cotton leads the way for points with an average of 25.43. He is impressive on all fronts but is a clear standout in the competition when it comes to his ability to hit the scoreboard on a frequent basis. Nathan Sobey is hot on his heels with an average of 23.56 points for the Bullets while Mitch Creek has been a pillar of consistency for the Phoenix producing 21.19 points a game. Daniel Johnson has enjoyed his time out on court for the 36ers putting up 20.06 points as Tyler Harvey continues to ply his trade for the Hawks thanks to his 20 points.

Although it has been a disappointing season for the Cairns Taipans, Scott Machado has still found plenty of highlights leading the league with an average of 7.72 assists. Machado is incredibly crafty with ball in hand and is not afraid to show off his skillset. Despite being out for the past couple of games Keifer Sykes has proven to be crucial with ball in hand for the Phoenix registering 6.90 assists as Josh Giddey only gets better with time for Adelaide amassing an average of 6.65 dimes a game. cotton also features within the top five for assists thanks to his 6.21 average while Tai Webster has been a solid contributor for the New Zealand Breakers in their challenging season thanks to his 5.57 assists.

Hailing from the Perth Wildcats, John Mooney has imposed himself off the boards with a competition high 11.50 rebounds a game showcasing his overall strength and read of the play. The next best is Cameron Oliver with the Taipans representative a menace off the boards thanks to his 8.89 rebounds while Victor Law is also up there credit to her 8.25 rebounds a game. Isaac Humphries has been forced to the sidelines for the past couple of rounds but still holds a commanding position in the competition when it comes to rebounds through his 8.08 average while Jock Landale is a force to be reckoned with for Melbourne United producing 7.88 in each outing.

The Illawarra Hawks have two players feature in the top five for steals with Justin Simon taking out the number one spot thanks to his 1.94 steals a game while Tyler Harvey bookends it with 1.44 steals a game. Cameron Gliddon has been a consistent figure for South East Melbourne Phoenix managing 1.82 in each outing as Cotton also chimed in with 1.79 steals a game for Perth. Mitch McCarron has made a name for himself for Melbourne United picking up 1.56 steals displaying his ability to cleanly get hands to ball.