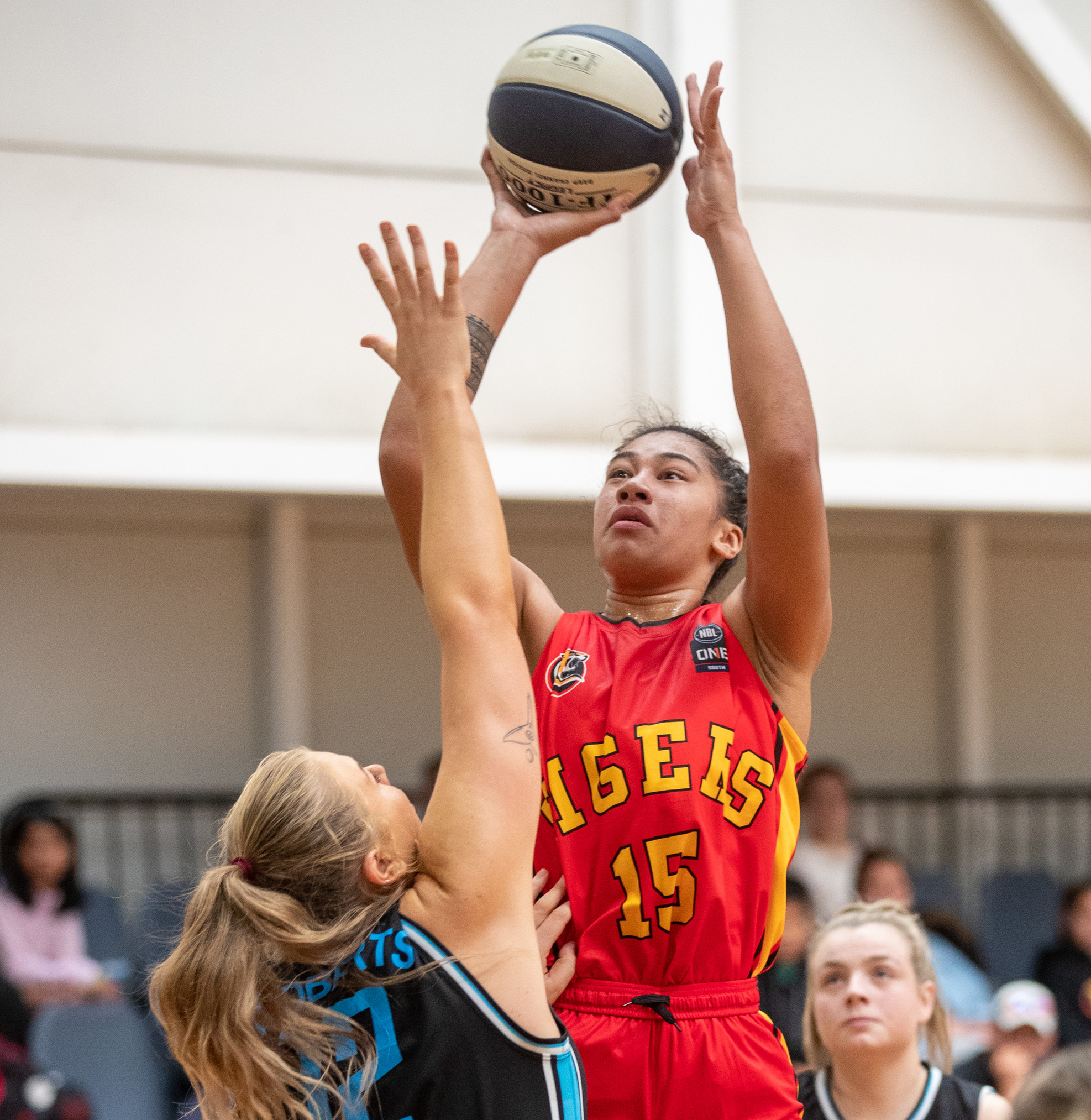 IT is already up to Round 4 in the National Basketball League (NBL)1 South competition, and our matches of the round this week feature the 3-1 Bendigo Braves and Melbourne Tigers in the women’s, whilst in the men’s, the undefeated Knox Raiders (3-0) lock horns with the Ringwood Hawks (2-1).

In our NBL1 South women’s match of the round, two sides with 3-1 records go head-to-head in Bendigo Braves and Melbourne Tigers. The Tigers also go on to play the winless Mt Gambier Pioneers on Sunday at home, but first have to make the trek up to Bendigo on Saturday. Both these teams come in with some great form, but it is hard to look past the Tigers who completely dismantled Albury-Wodonga Bandits (48 points) and Diamond Valley Eagles (45), then took care of the Hobart Chargers (22). The big question mark is the fact the Tigers have not beaten a side that has won a game yet, with all three teams having been winless to start the season.

They went and lost to Sandringham Sabres in Round 1 before the Tigers had hit their groove, with the Sabres having now lost their past two games to sit 2-2 heading into Round 4. On the other hand, the Braves have been ultra impressive, winning by 28 points against Dandenong Rangers last week, after overcoming Ballarat Rush in an overtime thriller the day before. Their only loss came in Round 2 with a spirited six-point defeat at the hands of the top of the table Frankston Blues, which was the exact margin the Braves came away with in victory against the Mr Gambier Pioneers in Round 1. On paper, the Tigers form looks better, but in theory, the Braves have played the tougher opponents which makes this set for a ripping showdown.

Looking at the Braves’ side, Tess Madgen has had a brilliant start to the season, with the WNBL star putting up 22.5 points, 8.5 rebounds and 7.3 assists, as well as averaging more than a steal per game. After threatening with triple-doubles three consecutive weeks heading into this clash, it would be quite the feat if she could achieve it, especially coming off a blistering competition season-high 43 points (and nine rebounds, nine assists) against the Rangers last week. She has had at least nine rebounds the past three weeks and at least eight assists, showing just how damaging she can be across all facets of the court.

Across the court, Abigail Wehrung is an experienced talent, averaging the 15.5 points, 4.0 rebounds and 3.0 assists per game, while Cassidy McLean (6.5 points, 6.5 rebounds) and Piper Dunlop (7.5 points, 5.3 rebounds) are young guns on the rise in Australian basketball. The crucial cog in the team is center, Kate Oliver who has almost averaged a double-double across four games this season, putting up 16.8 points and 9.0 rebounds. In her last game she actually achieved the feat with a whopping 14 rebounds to go with 18 points.

Oliver will need to be at that level when she takes on rising WNBL star, Zitina Aokuso who has been lighting up the NBL1 with 15.3 points, 9.0 rebounds and 4.5 assists per game. The Townsville Fire talent has been managed to start the season, and since clocking up more than 30 points the past two weeks, has had a double-double (10 points, 13 rebounds) and then triple double (19 points, 12 assists and 10 rebounds). She has provided a big-small threat with dual sport start Monique Conti who has been in blistering shooting form, racking up 24.5 points, 5.5 rebounds and 5.3 assists per game.

After a quiet Round 1 game – indicative of the overall team performance against the Sabres, Conti has put up 28, 23 and 40 points in her past three games, as well as six, seven and seven assists, whilst also averaging a massive four steals per game, 11 coming in her past two games. Isabella Brancatisano has benefited from Aokuso and Conti being the focal points having moved up from the Supercats this season to put up 19.3 points, 6.5 rebounds and 4.5 assists, also racking up seven steals against the Bandits for an average of two per game this year. Gemma Simon (9.5 points), Geraldine McCorkell (8.5 points, 4.8 rebounds) and Charlotte Brancatisano (3.3 points, 2.8 rebounds and 3.8 assists) are among other Tigers doing well this season.

The other massive clash not to be missed will be the Launceston Tornadoes (3-1) up against the Eltham Wildcats (3-0). With the Wildcats having an earlier fixture against the winless Hobart Chargers, it is likely they will head into the clash with four straight wins and hungry to claim one on the road against the Tornadoes. The other non-Victorian side in the Mt Gambier Pioneers will travel to Dandenong Rangers and the Tigers home courts over the weekend, while Albury-Wodonga Bandits host Kilsyth Cobras (2-1) in a bid to get the Bandits’ first win of the season;.

Elsewhere, the undefeated Frankston Blues head up to Ballarat to face the 2-2 Rush, Diamond Valley Eagles will look to get on the board when they travel to the out-of-form Sandringham Sabres, and the undefeated Knox Raiders will head to meet Ringwood Hawks (1-2). Two sides with 1-2 records in Geelong Supercats and Nunawading Spectres will lock horns, with the Supercats having a second fixture – this one on the road – against Waverley Falcons on Sunday, while the Spectres also have a second fixture up against the Rangers on Sunday.

In the men’s competition, the undefeated Knox Raiders travel to The Rings in order to try and extend their record to four games up against the Ringwood Hawks (2-1). In their last start, Knox Raiders destroyed Albury-Wodonga Bandits by 73 points in the largest winning margin of the season. Prior to that, the Raiders picked up wins over Kilsyth Cobras (2-1) by 12 points and Geelong Supercats (1-2) by seven points. Both opponents have shown they could win, so the tight victories were still impressive, but the wiping the floor with the Bandits will give them great confidence coming into this match.

The Hawks on the other hand started the season with a forgettable 31-point loss to Eltham Wildcats (3-0), but have since rebounded with wins over Geelong Supercats (1-2) by 29 points and Mt Gambier Pioneers (0-3) by 44 points. The last two weeks have been pretty impressive for the Hawks, and will be really tested against the in-form Raiders, who will be hoping to keep in touch with top of the table Frankston Blues.

Ringwood Hawks have some great depth across their team, starting with big man Adrien Sturt, who is averaging a double-double of 20.0 points and 12.3 rebounds. After narrowly missing out on a double-double in Round 1 (25 points, nine rebounds), Sturt has made up for it with back-to-back double-doubles in Round 2 (23 points, 12 rebounds) and Round 3 (12 points, 16 rebounds) to be a dominant player off the boards. He will team up with Matthew Fennell (14.3 points, 5.0 rebounds) in the front court, with center Trevor Latham (7.0 points, 7.3 rebounds) the other big man to pull down boards.

The back court features some talented guards and scoring machines, with CJ Asuncion-Byrd having missed the last game, but averaging 23.0 points, 4.5 rebounds and 2.0 assists per match. Alongside him, Jack Barry has managed the 18.7 points, 5.3 rebounds and 2.7 assists, to make it a five which is quite threatening to opposition lineups. The Raiders back court features Ben Ayre (15.0 points, 4.0 assists and 3.5 rebounds) and Jack Roberts (8.3 points, 5.6 rebounds) who have both made promising starts to the season.

In the front court, the Raiders have plenty of depth across the board. Dylan Hare leads the way in terms of points with 14.3 points, 7.0 rebounds and 3.3 assists, with Abraham Nyok (11.0 points, 7.3 rebounds) the other key player using his time on court wisely with at least seven rebounds per match. Simon Grant has been a reliable source of support on that front, averaging more than seven points and rebounds per game, as well as three assists and steals per game, to be an all-round contributor and has helped the Raiders remain undefeated this season.

In other results, Eltham Wildcats (1-2) make the trek to Tasmania to take on the Hobart Chargers (2-2) and North West Thunder (3-1), while Mt Gambier Pioneers (2-1) face both the Dandenong Rangers (0-3) and Melbourne Tigers (1-3) on the road. The Tigers take on the impressive Bendigo Braves the day before, with the Rangers locking horns with the Nunawading Spectres on Sunday. Albury-Wodonga Bandits is the only side to have lost four games and they come up against the Kilsyth Cobras (2-1) at home this week, with the undefeated Geelong Supercats hosting Nunawading Spectres (2-1) and then travelling to Waverley Falcons (2-2).

In the other remaining matches, two teams with opposite win-loss records in Sandringham Sabres (1-3) and Diamond Valley Eagles (3-1) do battle, while two evenly balanced teams with 2-2 records in Ballarat Miners and Frankston Blues also clash.