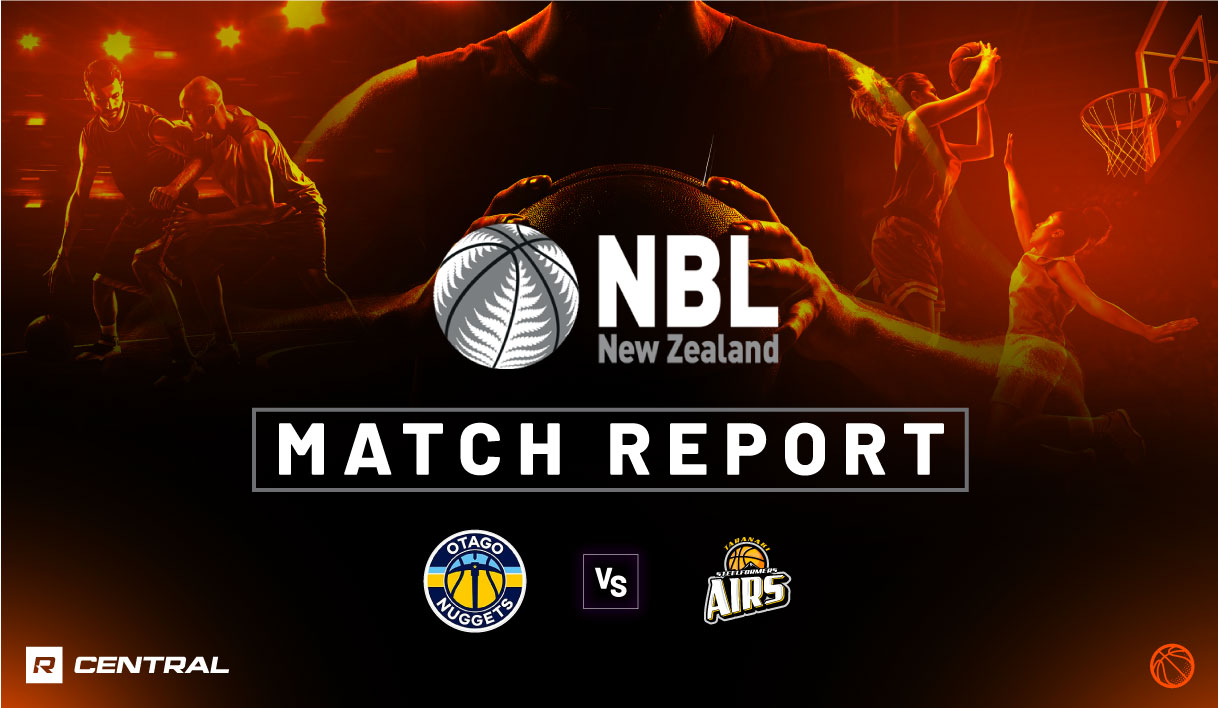 PICKING up a 10th win in the 2022 New Zealand National Basketball League (NZNBL) season, the Taranaki Mountainairs put themselves in a strong position to secure a top two spot in the fast-approaching finals. The Airs dominated the third term to set up the 98-73 victory on the road at the Edgar Centre.

Viewed as a real four-point game, the Taranaki Mountainairs came into the contest sitting at 9-6, while Otago Nuggets were a win behind on 8-7. A top three spot was up for grabs for the winner, and both teams have shown throughout the season they are more than capable of stepping up when it counted. The home team was minus long-range deadeye Nikau McCullough and Tall Blacks bigman Sam Timmins, while fellow Tall Blacks Tai Wynyard and Richie Rodger were missing from the Airs lineup. The visitors were quick out of the blocks to build a 25-17 lead thanks to the work of imports Javonte Douglas and Anthony Hilliard.

Responding in turn were the Nuggets who had a much better second term to draw level midway through the term thanks to an outstanding 10 minutes from Billy Boyd III, well supported by Keith Williams. The 28-24 quarter win meant the deficit was trimmed to four points by main break, but the work was still to be done. Unfortunately for Otago, that work would by done by Taranaki as the Airs stormed away with a 35-14 third term to end any chance of a home team win. Putting an exclamation mark on the performance in the term, the Airs scored the last 13 points of the quarter, as Hillard, Douglas, Shaun Willett and Marcel Jones took control.

The final term was a low-scoring slog as the Airs rotated players, with both teams adding 14 points to their totals, and the visitors securing the 98-73 victory. Taranaki was far more efficient at shooting, putting up 55 to 36 per cent. The Nuggets were their own worst enemy, nailing just six of 36 from beyond the arc, as the Airs hit nine of 23. Though the Nuggets marginally lead in the steals (7-6) and the blocks (4-3), they were remarkably clean with ball-in-hand only committing eight turnovers to 17. Unfortunately Otago did not punish the Airs, as the visitors still had more points from turnovers (13-7) and dominated in the paint (54 points to 34), whilst easily winning the rebound (49-33) and assist (20-14) counts.

Taranaki had a quadruple threat on the scoring front, as Hilliard lead the scoring with 25 points, as well as four rebounds and two assists, also nailing four triples. Douglas (23 points, seven assists, six rebounds, two steals and two blocks) was phenomenal throughout, while Jones (19 points – at 100 per cent from the field – nine rebounds and two assists) and Willett (18 points, nine rebounds, four assists and two steals) were all terrific. The Nuggets had two key shooters in Boyd (29 points, five assists and two rebounds) and Williams (27 points) but did not have enough depth in the shooting ranks.

Otago Nuggets next face Southland Sharks at home on Wednesday, while Taranaki Airs hit the road against Franklin Bulls next Friday.