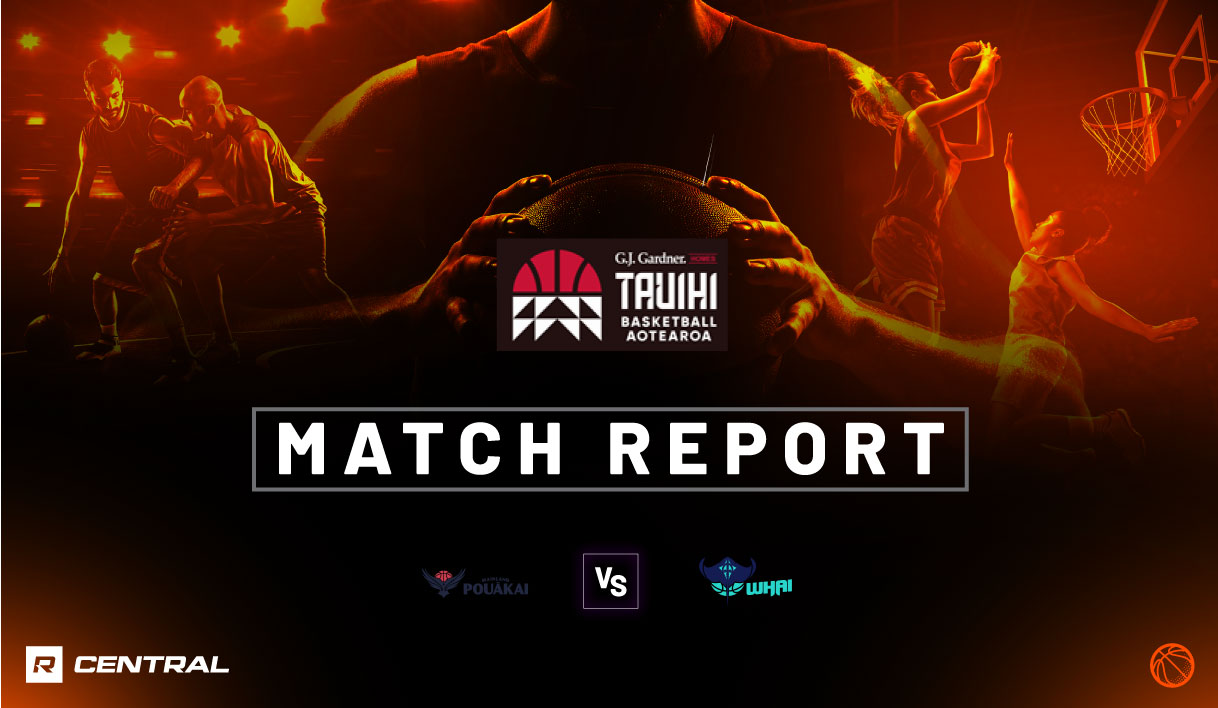 A JAW-DROPPING long-range shooting display from Tiarna Clarke has seen the talented guard lead Mid-North Whai to a record-breaking 30-point win over Mainland Pouakai and move into second spot on the Tauihi Basketball Aotearoa ladder. The Whai were unstoppable from range, with Clarke delivering a record 11 successful makes from beyond the arc to help the Whai pile up 41 points in the third term – the most ever – as well as the biggest total score and greatest winning margin during the 99-69 triumph at Cowles Stadium.

In a battle between second and third, the home side Mainland Pouakai went in as favourites over Mid-North Whai, though the Whai had only dropped the one game in four outings. It was a tight first half, which was relatively straightforward compared to what as to come, the sides traded blows throughout the opening term. The lead changed no less than 10 times, as the Whai took a one-point lead into quarter time. That opened up to four points by the main break, but despite the Pouakai sticking to the task, could not regain the lead beyond the opening few minutes of the quarter, and trailed 32-36.

Enter Clarke and the Whai. In a record-breaking third term, the visitors slammed on 41 points to 14 and the Pouakai defence had no answers as the deficit went from manageable to a gap too far to bridge. Clarke nailed six long-range attempts, whilst Kyra Lambert dropped three, in a dominant effort from beyond the arc. Lambert as also dishing up assists left, right and centre, whilst Sheniqua Greene was pulling down boards at both ends on her way to what would become a double-double. The lead by the final break had blown out to 23 points and it was effectively game over.

Determined not to take the foot off the gas, the Whai also won the last term, scoring 22-15 to extend the lead out to an even 30 points, which handed them a record high score and record winning margin in what was ultimately a shooting fest. The Pouakai tried hard throughout the game, but were soundly beaten, with Trinity Baptiste (20 points, 13 rebounds) and Erin Whalen (20 points, six rebounds, two assists and two steals) the only two double-figure scorers. The more even spread from Whai was evident, shooting at 46 per cent across the board, including 19 of 41 from long-range, compared to Pouakai’s seven of 28.

The Pouakai got to the line more and finished off with 20 of 24 from the charity stripe, but were smashed from a volume and accuracy perspective. It was largely down to the work of Clarke, who put up 34 points – 11 of 20 from long-range – two rebounds and two steals. Lambert drained three of five from beyond the arc for a total of seven from 13 and 22 points, as well as 12 assists and five rebounds. She was one of two players to amass a double-double, as Greene picked up 14 rebounds – including six offensive – to go with her 17 points.

The Whai next take on Northern Kahu tomorrow on the road, while the Mainland Pouakai also face the Kahu, but four days later on July 23.