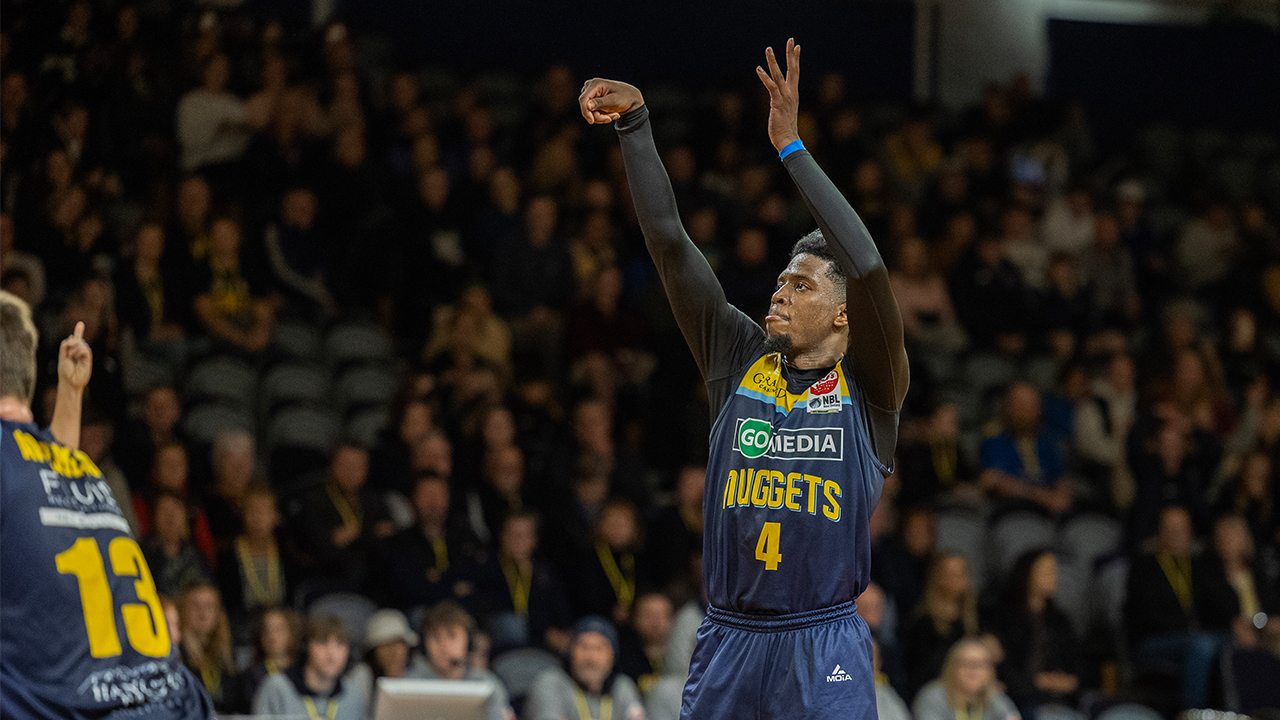 THE bottom three sides in the New Zealand National Basketball League (NZNBL) were all on the receiving end of some hefty losses, as Hawkes Bay Hawks, Otago Nuggets and Canterbury Rams all staked their claims for a Final Four finish. The second placed Hawks shot down the Manawatu Jets by 28 points, the fourth placed Nuggets produced the most dominant performance of the year to win by 40 against Franklin Bulls, and the fifth placed Rams kept in touch with the top four courtesy of a 24-point win over cellar dwellers, Taranaki Mountainairs.

Hawkes Bay Hawks were red hot from the opening tip-off, putting up 28 points to 13 to race out to a 15-point lead. Whilst the second term was even in a high-scoring affair, the Hawks once again took control in the third to all but end the contest as it pushed the difference to beyond 30 points. A rallying effort in the final term cut the Jets back to within 28, but they were no match for the Hawks, going down 61-89.

Devondrick Walker won the Most Valuable Player (MVP) on the night for his 25 points, eight assists and six rebounds, ahead of Jordan Hunt (17 points, three rebounds and two assists) and Hyrum Harris (10 points, 11 rebounds, seven assists and five steals. All five starters hit at least one shot from long-range, as Rhys Vague also picked up a double-double of 11 points and 12 rebounds. Ethan Rusbatch (10 points, two rebounds) was the other Hawks player to hit double-figure points.

For the Jets, Daishon Knight stood tall with 20 points, five rebounds, four assists and three steals, leading the way from Jayden Bezzant (16 points, two steals) and Deandre Daniels (12 points, 10 rebounds and five blocks). Tukaha Cooper came on for less than 11 minutes and contributed eight points – including a triple – in that time.

In the Otago Nuggets’ complete domination of Franklin Bulls, the home team never looked like losing, piling on 23-9 in the opening term. The high-scoring second term of 34-28 showed perhaps the game might get back on even terms from that point, but it was not to be as Otago again put the defensive pressure on, scoring 26-9 in the third term to lead by a whopping 37 points with a quarter to play. The final term was tighter, but the home team still won it by three, notching up a massive 40-point win, 104-64.

Sam Timmins won another MVP award for his effort, notching up 24 points and a massive 19 rebounds – 17 defensive – whilst recording two assists and two steals for his troubles. Isaiah Moss provided the long-range daggers with six of 13 from beyond the arc on his way to 23 points, four rebounds and three assists. Both players spent less than 28 minutes on court in the win. Gerasimos McKay (14 points, eight rebounds, seven assists and two steals) and Richie Rodger (11 points, three rebounds were productive, whilst the lopsided scoreline allowed five bench players to spend more than 10 minutes on court, and six of the seven coming on to score.

In the third game, Canterbury Rams kept their finals hopes alive with a solid 24-point win over last placed Taranaki Mountainairs. The Rams produced the goods early in front of home fans, applying 26 points to 16 to lead by 10, then extended that margin out to 16 by half-time. The Airs cut into the deficit by two heading into the final term, before the Rams stepped up to produce an identical quarter to the first one (26-16) to win, 92-68.

Marcel Jones was back to his double-double best in a hard working 16-point and 10-rebound effort, shooting three of six from long-range and also collecting a couple of steals. Tai Wynyard (16 points, four rebounds) and Carlin Davison (14 points, three assists and two rebounds) also reached double-figure points, as Francis Mulvihill (seven points) and Deu-Leo Leusogi-Ape (six points, three rebounds and two assists) were the next best.

Franklin Bulls and Canterbury Rams tip-off the next round of action on Thursday, with a battle between the Taranaki Mountainairs and Manawatu Jets on Friday. The Hawkes Bay Hawks host the Franklin Bulls on Saturday, whilst the Otago Nuggets rest up until a home game against Auckland Huskies on Sunday.