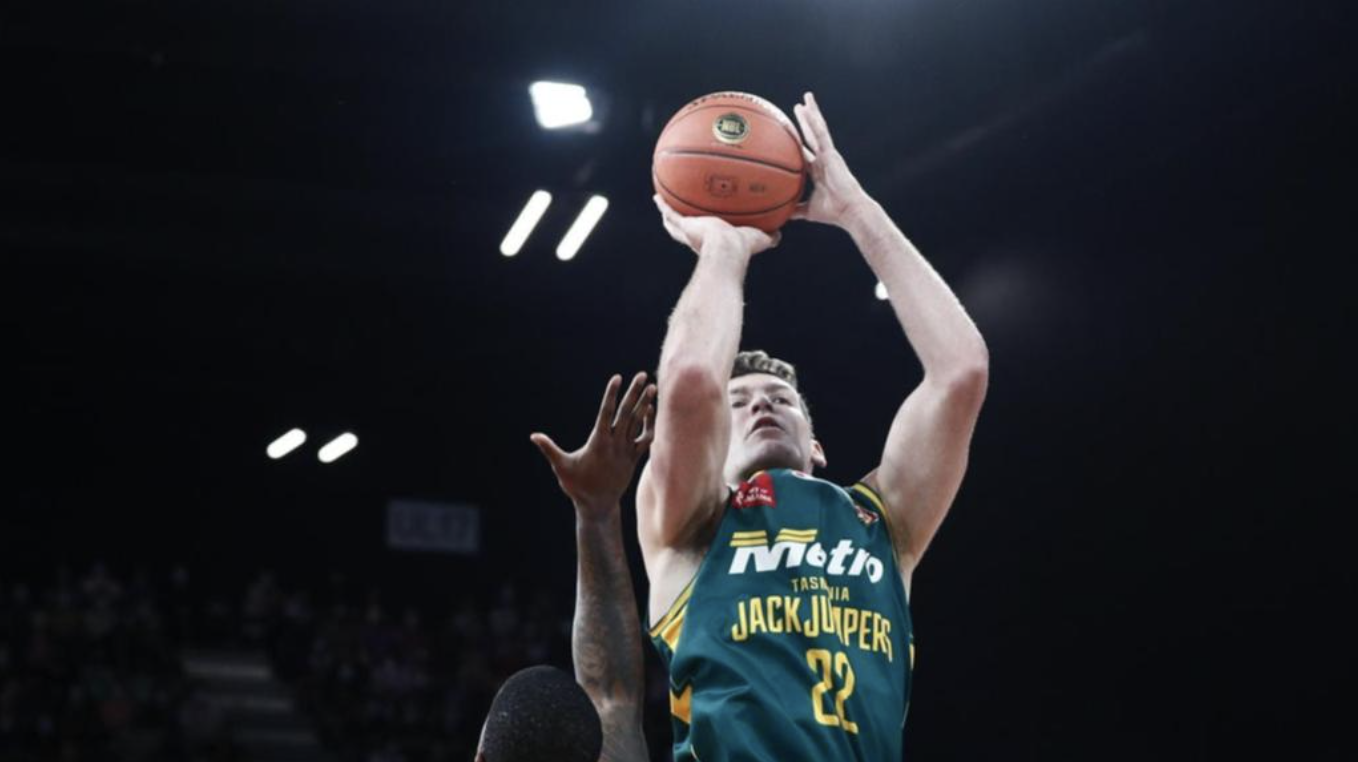 AFTER being lodged in the bottom two for the most part of the early season, the National Basketball League’s (NBL) newest side, the Tasmania JackJumpers have strung together three consecutive wins. Their latest dispatch – of the Sydney Kings – resulted in the JackJumpers marching past their opponents into the top five, and now within reaching distance of the post-season spots. Against the Kings, the JackJumpers were forced to come back from a big quarter time deficit to piece together an amazing second quarter, and then in a tight second half, and eventually won, 77-70.

Sydney started the match on fire, piling on 24 points to 15 in a blistering opening term. They were 100 per cent accurate from inside the key, and had fired two of eight from beyond the arc. By comparison, the JackJumpers were unable to get close to the basket, with just two makes from in close, and four of six from inside the arc. They had two makes from 12 outside the arc, and were down by nine points when the quarter time siren came around. Both the “J Adams” were also on-song, with Jaylen Adams doing well alongside Jarell Martin, and Josh Adams .stepping up for the JackJumpers.

Trailing by nine at the first break, the JackJumpers burst out of the blocks as Adams, Jack McVeigh and Will Magnay were having their say on proceedings. Though both sides traded blows through the middle of the term, and the Kings were able to extend it back out to as much as seven points, the JackJumpers kept coming. At 30-36, enter Josh Magette. Piling on nine points – with Magnay contributing three and Adams putting up a couple of free throws – the JackJumpers marched to an eight-point lead. Though Xavier Cooks managed to score a last minute turnaround jumper, the JackJumpers were still in control at 44-38.

The penultimate quarter was ultimately more of a defensive showcase. After both McVeigh and Martin put up triples for their respective sides in the opening 45 seconds, neither side could get clean looks. With four minutes left in the term, Sydney had scored six points to five after what had been a high-scoring opening half. Sam McDaniel broke through for a couple of important baskets as Tom Vodanovich got to the line for the Kings. Both the New Zealand big man and Cooks were forcing fouls and for the most part delivering, but it was the home side’s ability to continue to shoot from range that was the difference. Adams was on fire, and lead his side to a seven-point lead in the final minute of the term. Adams came back with three of four free throws after getting one of two, picking up the offensive rebound and foul, then nailing before, to cut the deficit heading into the final term just four points, 54-58.

JackJumpers’ Adams was quick to put up a jumper in the opening minute with the JackJumpers and Kings trading early baskets. Despite continually getting to the charity stripe and delivering, the Kings were always matched by the JackJumpers ability to get into the lane without too many issues. Clint Steindl, McVeigh and Magnay helped grow the margin out to a game-high nine points, and whilst the Kings were able to get it immediately back to seven, back-to-back free throws, then a triple from Magette blew it out to 12 points with less than four minutes remaining. Though the JackJumpers lead by 11 points with two and a half minutes on the clock, the Kings the next six to cut it to five with 32 seconds on the block. From the foul line, Magette made no mistake, and in the end, the JackJumpers got it done by seven points, 77-70.

Magnay was superb on both ends for the JackJumpers with the ex-Bullet putting up 12 points, seven rebounds – six defensive – and four blocks, teaming up well with three of the other starters who recorded double-figure points. Magette lead the way with 18 points – four of 10 from beyond the arc – whilst McVeigh (17 points, eight rebounds) and Adams (16 points, five rebounds and four assists) were all very impressive. For the Kings, Adams managed a game-high 24 points, as well as four rebounds, four assists and four steals, with Cookes putting up 18 points and collecting 13 rebounds. Martin (16 points, nine rebounds and three steals) was the other key player in the loss.