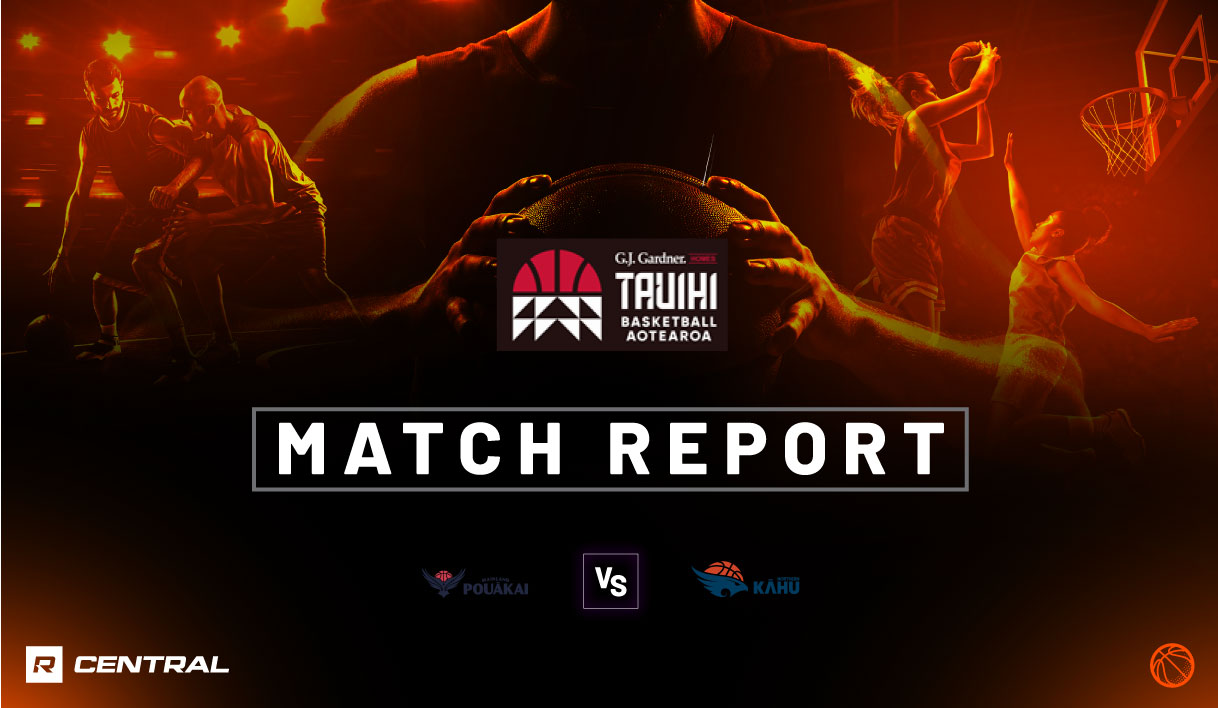 REMAINING undefeated, Northern Kahu came from behind at half-time to down Mainland Pouakai by eight points in Round 4 of the Tauihi Basketball Aotearoa last night. The Kahu trailed by nine points at the main break, before levelling the scores with a huge third term, and coming away with the 83-75 victory at Christchurch Arena courtesy over a slick team performance that only saw the visitors commit five turnovers for the entire match. The win meant the Kahu moved to 7-0 to be the clear team to beat moving into the second half of the season.

Tipping off a comparatively small Round 4 of action with as many games as the name might suggest, the unbeaten Northern Kahu came in as strong favourites despite Mainland Pouakai having some impressive moments this season to be 3-3 in the mid-table logjam. The home fans had some reason to be optimistic as the Pouakai started strongly scoring the first 10 points of the game and reducing the ladder leaders to just 10 points in the first term, as they got out to a six-point lead at quarter time. Trinity Baptiste and Mary Goulding were particularly damaging for the Pouakai, while Micaela Cocks provided the breakthrough basket for the Kahu and was trying hard.

Akiene-Tera Reed was forcing fouls in the paint and nailing them from the line as she, Cocks and Tahlia Tupaea clawed the Kahu’s deficit back to within three points, before Lauryn Hippolite, Tessa Boagni and Goulding put it back out to double-digits. It went out to as much as 14 points at one stage as Erin Whalen got in on the action, but a much-needed driving layup from Krystal Leger-Walker triggered the Kahu to score the last five points of the half and draw within nine at the main break.

Northern Kahu started the second half well, getting on the board through Cocks and Leger-Walker, before a five-point purple patch to Marte Grays chipped in. Soon, the likes of Tupaea, Leger-Walker and Reed had scored 18 of the first 24 points and with a Tupaea triple, the Kahu hit the front for the first time in the match midway through the third term. Boagni and Baptiste wrestled back some of the momentum, and after trailing by as much as five points with a minute to play, Baptise scored the last five points – from an And One and layup – to level the scores at the final break.

Baptiste was having some sort of game, and she and Tupaea were trading blows early in the fourth. Another purple patch from Grays gave the Kahu the breathing space they needed, and while the Pouakai kept up – thanks to a triple from Whalen with five minutes to play – Grays and Cocks extended it back out to seven with just under three minutes to play. The home side kept coming and closed the gap to five points with 44 seconds to play, but it would not be enough as the Kahu got home by eight, 83-75.

Tupaea finished with a massive game-high 27 points, as well as four steals, three assists and two rebounds, while Grays (16 points, five rebounds) and Cocks (13 points, five rebounds and six assist) both stepped up in many facets of the game. Leger-Walker also notched up double-figure points with 12 points, three rebounds, three steals and two assists, while Reed came off the bench for eight points, seven rebounds and three assists in 26 minutes. Fo the Pouakai, Baptiste scored 20 points – 61 per cent from the field – and three rebounds, while Goulding (15 points, nine rebounds) and Whalen (!1 points, four rebounds and three assists) were also productive. Boagni came close to a double-double with nine points and 10 rebounds.

Northern Kahu play Southern Hoiho on Tuesday to close out Round 4, while Mainland Pouakai next face Tokomanawa Queens on July 30 in Round 5.