NBL Round 8 review: Top four starting to shape up 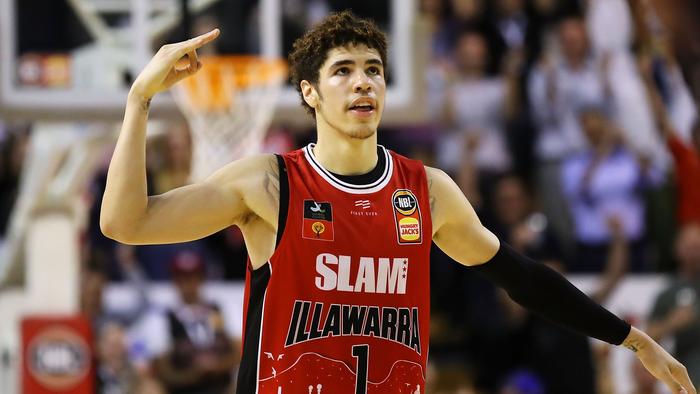 THE Sydney Kings continued their reign at the top of the table while Melbourne United extended their winning streak to firm up their spot in the top four after Round 8. Cairns Taipans did not leave any stone unturned downing the higher ranked Perth Wildcats but that high was shortly lived with LaMelo Ball bringing them back down to earth in a history making performance. Meanwhile the clash between the Bullets and 36ers came down to the wire.

A failed three-point jump shot from fan favourite Jerome Randle all but summarised the 36ers performance – so close but yet so far. The intensity was up from the first whistle but lifted a whole other level in the last 10 seconds with the ball flicking from one end to the other in a last ditch effort to either extend the lead or claim it. But in the end the Bullets stuck strong to notch up their fifth win for the season. Both sides could hardly be separated drawing even at the first break with the biggest margin at a break three points highlighting the closeness of the match. Lamar Patterson led the way for Brisbane with a game-high 27 points along with six rebounds while teammates Nathan Sobey and Ej Singler chipped on the scoreboard with 21 and 20 points respectively. For the 36ers, Randle was arguably one of the best on court despite missing that late shot racking up 25 points for his efforts. Anthony Drmic was also key, keeping his side in the hunt thanks to his 25 points, five rebounds and six assists meanwhile Eric Griffin just fell short of a double-double with 18 points and nine rebounds.

After a stellar start to their inaugural season, the Phoenix have hit a mid-season slump dropping their third consecutive game. On the other hand, the Kings continued their merry way downing South East Melbourne albeit by four points after securing a commanding lead in the opening half. Sydney opened the game strong with 25 and 30 points in each of the first two terms respectively, before Phoenix fought back in the third restricting their opponents to a mere 12 points while piling on 28 themselves to get back into the game. Unfortunately, it was not enough with the likes of Casper Ware and Andrew Bogut doing a heap of damage offensively and defensively. Ware top-scored with 25 points and four assists while big man Bogut threw his weight around with 10 rebounds and nine points. Jae’sean Tate was crucial for the Kings helping the scoreboard tick over with 24 points and eight rebounds. Credit where credits due John Roberson played his part to keep the Phoenix in it popping up with 25 points and seven assists with Mitch Creek hot on his heels with 20 points, seven rebounds, one steal and one block proving why he is considered apart of the higher echelon of players.

The Taipans caused a big upset at home over the second placed Wildcats with a seven-point victory. It was an even start with both sides managing 21 points apiece before the Wildcats let loose with a 29 to 19 second term. But Cairns was not to be outdone upping the ante in the fourth quarter, digging deep to go on a scoring spree notching up 30 points to 14 to reverse the table and claim the lead. Despite their best efforts Perth seemed to have no answers for the Taipans with a host of players contributing equally across the game. Kouat Noi could not be denied amassing 19 points, six rebounds and two assists, while both Scott Machado and DJ Newbill featured on the points board with 17 apiece. Machado recorded a double-double adding 11 assists to his 17 points, while defensively Cameron Oliver put on a masterclass with four blocks. The Wildcats were not without their chances but with star player Bryce Cotton down on his usual output (10 points, four rebounds) along with Terrico White absent their scoreboard tally suffered. Mainstay Nick Kay covered the court well converting 16 points while Clint Steindl did the most damage with 17 points.

Melbourne United have well and truly shaken off their disappointing start to the season notching up their sixth consecutive win to get their season back on track to sit two games ahead of fourth and one away from second. Despite being challenged throughout the game Melbourne, looked in control and composed even having time for trick passes with Mitch McCarron showing a touch of class with an around the back assist to Chris Goulding who converted from outside the ark. Goulding finished with 14 points, while McCarron made his presence felt with recording a double-double thanks to his 12 rebounds, seven assists and 12 points. American Melo Trimble did not muck around securing a game-high 25 points with Tohi Smith-Milner chipping in with his 19 points despite only being on the court for 10 minutes. Center Jo Lual Acuil took the game by storm with 15 rebounds with Matthew Hodgson the closest for the Bullets with seven. Jason Cadee did the most scoreboard damage with 18 points while usual suspects Sobey (17) and Patterson (14) contributed but failed to match United’s scoring prowess.

The Adelaide 36ers came out with a bang dismantling the Breakers in a comprehensive performance granting them the highest score for the season. The Breakers have had less than a desirable past month of basketball dropping their past five games and despite putting up a good fight in the first and last quarter could simply not maintain that same heat and intensity allowing the 36ers to capitalise on their vulnerabilities. A 31 to 15 second quarter proved too hard to come back from for New Zealand. Griffin notched up 25 points for the game with four other teammates making it into double figures highlighting the even contribution. Daniel Johnson slotted 19 points and was also instrumental under the rim with 11 rebounds for Adelaide. Sek Henry led the way for New Zealand sinking 18 points with young gun RJ Hampton also plying his trade with 15 points, three rebounds and six assists. Brandon Ashley did the work across the court both defensively and offensively notching up 13 points and eight rebounds but it was not enough to stop the 36ers who were on a mission.

It was a Ball masterclass with the potential NBA number one draft pick, single handedly guiding the Illawarra Hawks to victory over Cairns. Ball had ice in his veins sinking the tying three point shot in the dying seconds of the game to send it into overtime while also making history to become the youngest player in NBL history to record a triple double with 32 points, 11 rebounds and 13 assists. The Hawks had an early lead and were close to squandering it thanks to the increased pressure coming from the Taipans in the second half of the game. But despite their best efforts Cairns simply could not maintain that intensity in overtime only managing seven points compared to the Hawks 15. Newbill stood up for the Taipans with the captain sinking 27 points, five assists and three rebounds while Machado played his part up and down the court securing a double double with 22 points and 13 assists. But that was simply not enough to stop the stream train that was Ball, with fellow teammate Tim Coenraad coming along for the ride with 27 points of his own. Sunday Dech also reached double figures for the Hawks with 15 points while Andrew Ogilvy hit the scoreboard with 11 points and made an impact in defence racking up four blocks.