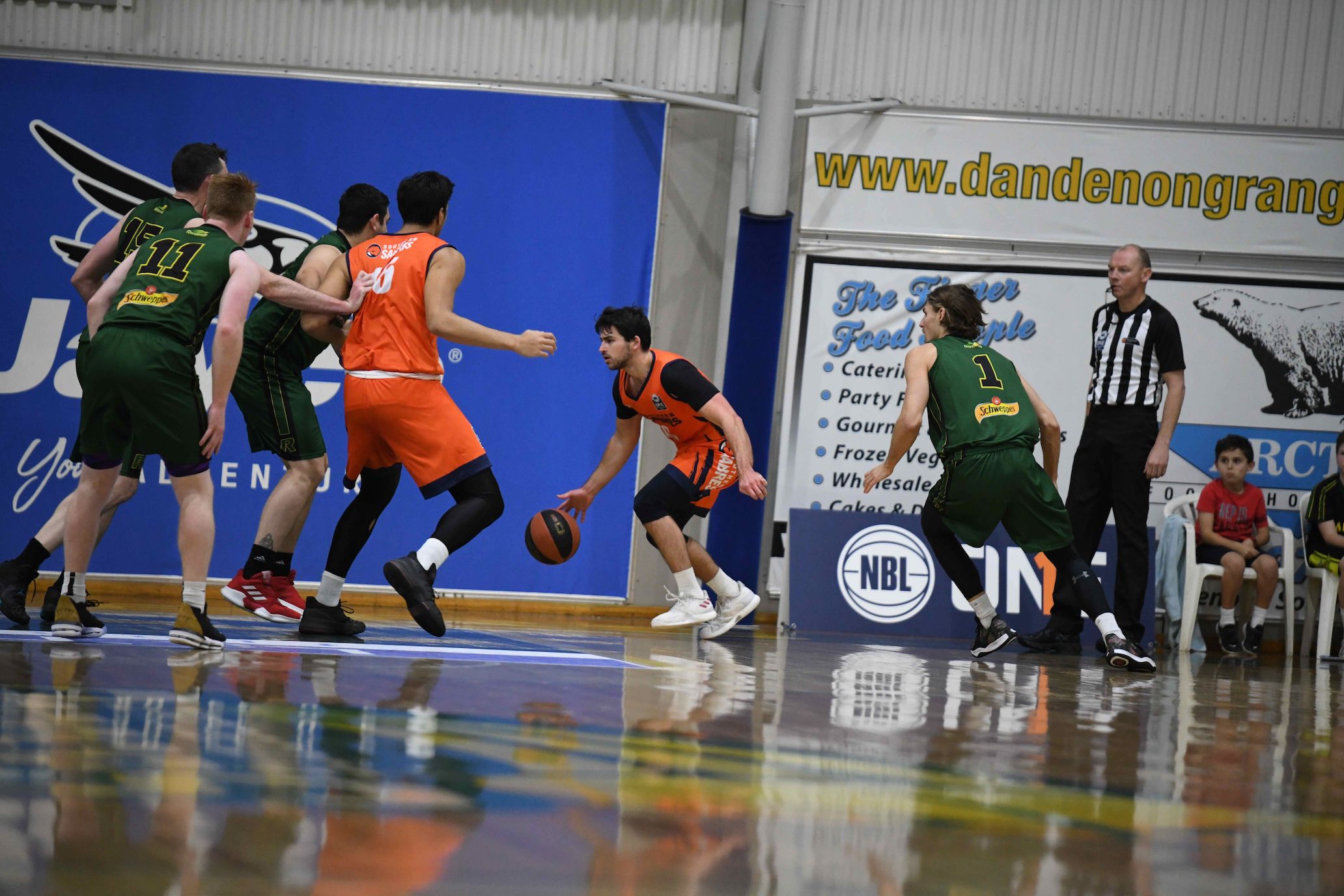 SIX of a possible 10 National Basketball League (NBL)1 Men’s games were decided by 10 points or less in a thrilling round of action. Of those games, one included an overtime win to last placed Southern Sabres to upset the Dandenong Rangers, while both top four clashes lived up to expectations with a combined five points separating the sides.

The game of the round was Southern Sabres’ massive upset over the Dandenong Rangers, winning just their third game of the year, while handing the fifth placed Rangers a reality check. The 138-130 high-scoring victory saw the Sabres welcome back both David Barlow and Sam McDaniel, who along with Nicholas Gabsch who did as they pleased. Barlow had 30 points, 10 rebounds, five assists and five steals, only bettered in the points stakes by Gabsch, who finished with 32 points, four rebounds, two assists and one steal. McDaniel was the playmaker in the attacking half, sinking 22 points while having 12 assists and five rebounds in a big return game. For the Rangers, Dexter Kernich-Drew helped himself to 28 points, two rebounds, three assists and two blocks, while Matt Kenyon (27 points, 14 rebounds, three assists and five steals) and Lucas Barker (22 points, six rebounds, 13 assists and two steals) were also impressive despite the defeat. The loss saw Dandenong drop two places down to seventh after wins to Kilsyth Cobras and Frankston Blues.

The Cobras accounted for Knox Raiders by 13 points in their game despite a really slow start. The Cobras trailed by 13 points at half-time, then something clicked to cut the deficit to seven by the last change, then run away with the game in the final term, shooting 34 points to 15 in a one-sided quarter. Isaac Turner was busy with 24 points, two rebounds, two assists and three steals, while Peter Hooley (15 points, four rebounds, six assists and three steals), Owen Odigie (15 points, five rebounds and three steals) and Tohi Smith-Milner (14 points, six rebounds, four assists and two steals) were also productive for the Cobras. For the Raiders, Cadarian Raines were best on court with 19 points, seven rebounds and two assists, while Adam Thoseby also had 19 points, and Mike Rose finished with 10 rebounds and five assists to accompany his nine points. The Raiders were able to turn things around in their second game, leapfrogging the Eltham Wildcats after a 77-72 win over them at home on Sunday. Thoseby was strong in attack with 22 points, while Raiders picked up a casual 18 rebounds and 13 points, while Simon Grant had 12 rebounds and four assists on the day. Adam Doyle was the clear standout for the Wildcats with 32 points, four rebounds and three assists, while Josh Sykes (15 points, seven rebounds and five blocks), Ben Waldren (15 points, four rebounds) and Geremy McKay (11 rebounds, five assists and two steals) all contributed despite the loss.

It was a disappointing weekend for the Wildcats who suffered another narrow defeat the day before, going down to Diamond Valley Eagles by four points. The Eagles dominated the second term by nine points, and despite the Wildcats cutting the last break deficit to three points, could not get the win in the 82-78 defeat. Sykes picked up 25 points, eight rebounds, two steals and four blocks in the loss, while McKay (14 points, 12 rebounds, four assists and three steals) and Doyle (13 points, six rebounds and four assists) enjoyed strong games. For the winners, Logan Hovey had 23 points, six rebounds and two assists, while Darcy Harding had 20 points, five rebounds and four assists. Liam Thomas was big off the boards with 12 rebounds to go with his nine points, while Anthony Odunsi had 13 points, four rebounds, two assists and two steals in the win.

In the first game of the weekend, Frankston Blues continued their great form to knock off Basketball Australia Centre of Excellence on the road, and move up to sixth place on the table. The Blues proved too good over the four quarters despite slipping behind by seven points at the first break, piling on 33 points to 12 as a response in the second quarter. When challenged in the third, the Blues stepped it up again with a 28-17 final term to win, 100-78. Daniel Trist had 21 points and eight rebounds, while Najeal Young (19 points, seven rebounds), Damon Bozeman (17 points, six rebounds and six assists) and Lachlan Barker (16 points, two rebounds and two assists) continued their even contributions throughout games. Josh Bannan was the best for the young stars, adding 17 points and three rebounds, while Hyunjung Lee (14 points, four rebounds and two assists) and Hunter Clarke (10 points, five rebounds and four assists) also reached double figures.

In the two top four clashes, Ballarat Miners and Nunawading Spectres got the points over Geelong Supercats and Melbourne Tigers respectively in their victories. The Miners led throughout the game but never looked entirely comfortable, getting out to an eight-point lead at the final break before the home side cut the full-time deficit to just four in the 62-66 loss. Jerry Evans Jr (19 points, seven rebounds and four blocks) and Marqueze Coleman (17 points) were the key scorers for the Miners, while Josh Fox and Deng Acuoth shared in 26 rebounds while shooting seven points apiece. For the Supercats, Demarcus Gatlin had 22 points, eight rebounds, three assists and seven steals to do all he could for his side, while Lewis Thomas (12 points, 14 rebounds, two assists and two steals) and Nick Owusu (12 points, five rebounds, four assists and two steals) were also productive. In Nunawading’s narrow one-point win over Melbourne, the Spectres came from a point down at the final break to post a 19-17 final term to just survive in a 81-80 victory. Simon Conn was best on court for the Spectres with 22 points and 14 rebounds, while Shane McDonald (16 points, two rebounds and five assists) and Costa Hronopoulos (11 points, seven rebounds) were also important in the win. Dane Pineau (22 points, 15 rebounds, six steals and two blocks) was superb in defeat for the Tigers, while Mike Wells (16 points, six rebounds and two assists) was also crucial.

Meanwhile Bendigo Braves all but ended Albury Wodonga Bandits’ chances of finals, while jumping into the top eight themselves courtesy of an on-the-road win at Lauren Jackson Sports Centre. The Braves dominated early to lead by 14 at half-time and were able to control play from there in the 93-83 victory. Deonte Burton (29 points, five assists and three steals) and Mathiang Muo (28 points, five rebounds and two assists) were the dominant scorers for the Braves, while Torren Jones (20 points, 11 rebounds) and Ken-Jah Bosley (16 points, seven rebounds and three assists) were prolific for the Bandits. In the all-Tasmanian battle, North West Thunder got up at home by 21 points over Hobart Huskies. Paul Campbell had his best game of the season with a remarkable 21 points, 21 rebounds, three assists and six blocks in a match-winning effort, while Jordan Bowling (19 points) and Nick Banyard (11 points, 11 rebounds and four assists) also reached double-figure points for the Thunder. Jalen Adams (16 points, five rebounds), Zachary White (10 points, five rebounds and two steals) and Jordan Hargrave (10 points, four rebounds and two assists) were the other ones who scored more than five points in a disappointing loss for the visitors. In the last game of the round, Waverley Falcons got the job done as expected against the lowly Ringwood Hawks in a 97-78 victory. Deondre McWhorter was the standout with 30 points, 19 rebounds, two assists and two steals, while Dylan Travis (18 points, 13 rebounds, seven assists and four steals) was everywhere on the court. Despite the loss, Matthew Snow (21 points, seven assists and three rebounds) and Joey Miller (20 points, three rebounds) hung tough for the Hawks.