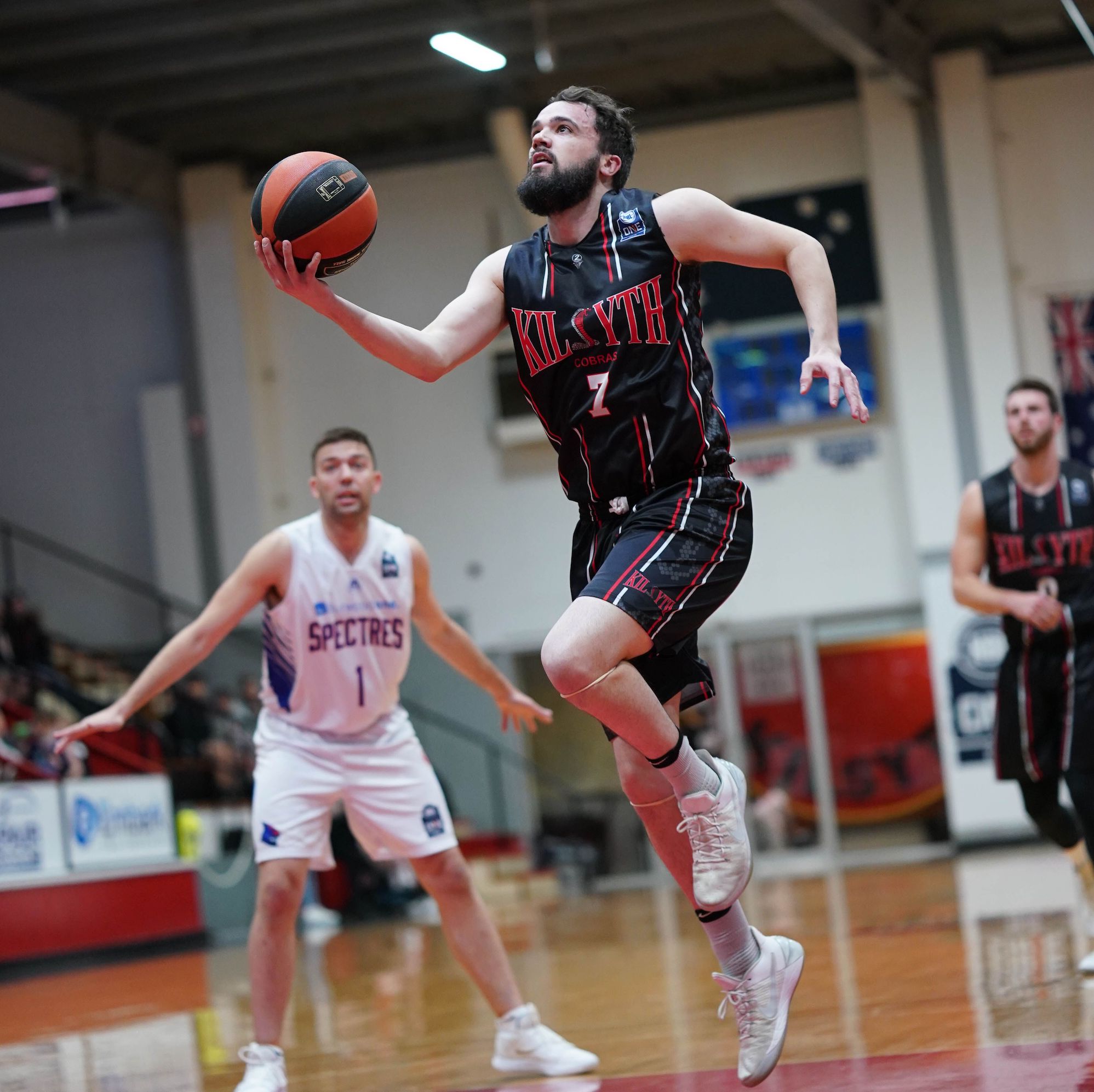 A TRIPLE-double to Kilsyth Cobras’ Peter Hooley was the highlight of the National Basketball League (NBL)1 Round 11 competition, with some surprising results. The Cobras downed Nunawding Spectres by 12 points in what was a forgettable weekend for the visitors, also going down to Waverley Falcons at home. Kilsyth became the first home side to post victory over the Spectres this season, testament to Nunawading’s superior ability to get the job done on the road. The Cobras made sure they had the ascendancy early, taking a nine-point lead into half-time, then extending that by as much as 21 by the final break. The Spectres hit back in the final term to cut the final margin to 12, but it was a case of too little, too late. Hooley was dominant all over the court with 17 points, 10 rebounds and 11 assists, while Tohi Smith-Milner (26 points, 13 rebounds, three assists), Isaac Turner (13 points, four rebounds) and Michael Wearne (13 points, two rebounds) were also important on the scoring end. For the Spectres, Costa Hronopoulos (25 points, 12 rebounds, two assists and two steals) and Simon Conn (22 points, seven rebounds and two assists) were the two who caused the most headaches for the home side.

Nunawading also suffered a devastating overtime loss to finals-bound Waverley Falcons, going down 101-94. The teams could not be split at the full-time buzzer after the Spectres remarkably came back from 15 points down at the main break to claw their way back and draw level. It was the Falcons who found the momentum in extra time, scoring 15 points to eight in the seven-point victory. Deondre McWhorter (33 points, five rebounds and two assists) and Dylan Travis (26 points, 10 rebounds and four assists) were dominant, while Bennie Lewis (15 points, nine rebounds, five assists, three steals and two blocks) was everywhere. For the Spectres, Conn had another superb game with 24 points, 14 rebounds, three assists and two steals, while Hronopoulos (21 points, eight rebounds and six assists) and Ben Ayre (20 points, six rebounds, eight assists and three steals) all found plenty of buckets on the attacking end. The day before, Waverley went down to a determined Diamond Valley Eagles side, 99-94. Trailing by as much as 14 points at the main break, the Falcons hit back in the second half, but could not force their way in front, going down by five points. Joel Spear was the star for the Eagles with 32 points, nine rebounds, three assists and three steals), while Logan Hovey (26 points, eight rebounds and two assists) and Anthony Odunsi (18 points, five rebounds, five assists and two steals) were also prominent from a scoring perspective. McWhorter was best on court in the loss, posting a mammoth 37 points, 12 rebounds, three assists and two blocks, while Lewis (24 points, three rebounds and four assists) was able to contribute on the scoring end as was Tim Liesting (six points, 12 rebounds, three assists and two blocks) off the defensive board.

A team that had a mixed weekend of results Ringwood Hawks, went down to Eltham Wildcats by 28 points, before securing a narrow seven-point win over Basketball Australia Centre of Excellence (CoE). The Wildcats proved a bit too strong at home against the Hawks, winning all four quarters on their way to a 107-89 triumph. Adam Doyle was excellent for the home side, registering 31 points, six rebounds, seven assists and three steals, while Geremy McKay helped himself to 21 points, eight rebounds and three assists in the win. Ben Waldren (17 points), Dave Schaffert (17 points, two rebounds and three assists) and Josh Sykes (11 points, eight rebounds, three assists, two steals and two blocks) also reached double-figure points in the victory. Adrien Sturt was the top scorer for Ringwood with 15 points, as well as four rebounds and two assists, while Shaun Clarke had 10 points and nine rebounds in a strong effort. In an even better performance, the Hawks toppled the CoE by seven points, having built up a 13-point lead at the main break, before holding on to eventually get home, 101-94. Sturt posted a round-high 42 points, as well as six rebounds and six assists, shooting at an impressive 66.7 per cent from the field, and 85.7 per cent from three-point range. Joey Miller (20 points, four rebounds, eight assists and three steals) and Matthew Fennell (17 points, six rebounds and two steals) were the other two notable scorers. Josh Bannan led the way for the CoE, finishing with 26 points, five rebounds, eight assists and four steals, while Angus Glover helped himself to 21 points, and Hunter Clarke finished with 17. Meanwhile the day before, Melbourne Tigers knocked off the CoE, 96-61 in a convincing victory. Mike Wells led the points scoring for the Tigers with 19, as well as four rebounds, two assists and two steals, while Dave Pineau (15 points, nine rebounds), Michael Luxford (15 points, eight rebounds and eight assists) and Nic Pozoglou (seven points, 16 rebounds and six teals) were impressive off the boards. For the CoE, Clarke was the dominant scorer with 16 points, nine rebounds and two assists, while Bannan had another 11 rebounds, and Kian Dennis shot 14 points and had three rebounds, three assists and two steals.

A team that maintained its percentage lead over the Bandits was Hobart Huskies, who knocked off Knox Raiders on Friday night in a three-point thriller. The Huskies came from 13 points down at quarter time to storm to the front in the third term and lead by three at the final break before a topsy-turvy final term saw that deficit remain by the final buzzer. Tad Dufelmeier posted 23 points, nine rebounds, seven assists and five steals, while Jalen Adams (17 points, eight rebounds), Zachary White (16 points, seven rebounds, two assists and three steals) and Jack Stanwix (17 points, three rebounds and three assists) were also busy in the match. Adam Thoseby (25 points) led the way for the Raiders, while James Hunter picked up a double-double with 20 points and 12 rebounds, as did Cadarian Raines, registering 10 points and 10 rebounds. The Raiders rebounded from the loss to the Huskies to knock off the other Tasmanian side in North West Thunder, getting up by 13 points. Thoseby again top scored with 22 points and six rebounds, while Raines (15 points, 10 rebounds) and Hunter (10 points, 12 rebounds) picked up double-doubles in the second game as well. Lachlan Dent (12 points, three rebounds, four assists and three steals) was solid for the Thunder, while Jordan Bowling (16 points, eight rebounds, two assists and two steals) was the losing side’s best. The Thunder was returning from an unsuccessful trip to Geelong on the Friday night, going down to the Supercats by five points in a gallant effort. The Thunder shocked the home crowd to lead by 11 points at quarter time, but by the main break, the Supercats were up by three in a change of fortunes. That margin was five by the final break and it was enough to see them hold on by that margin with an even final term. Ma’alo Hicks had 20 points, four rebounds, two assists and four steals in the win, while Lewis Thorne (18 points, 11 rebounds picked up a double-double) and Demarcus Gatlin (nine points, six rebounds and six assists) played an all-round game. Bowling again top scored for the Thunder with 19 points as well as seven rebounds, three assists and two steals, while Nick Banyard (16 points, nine rebounds) and Joseph Chilcott (15 points, seven rebounds and two steals) were also productive in defeat.