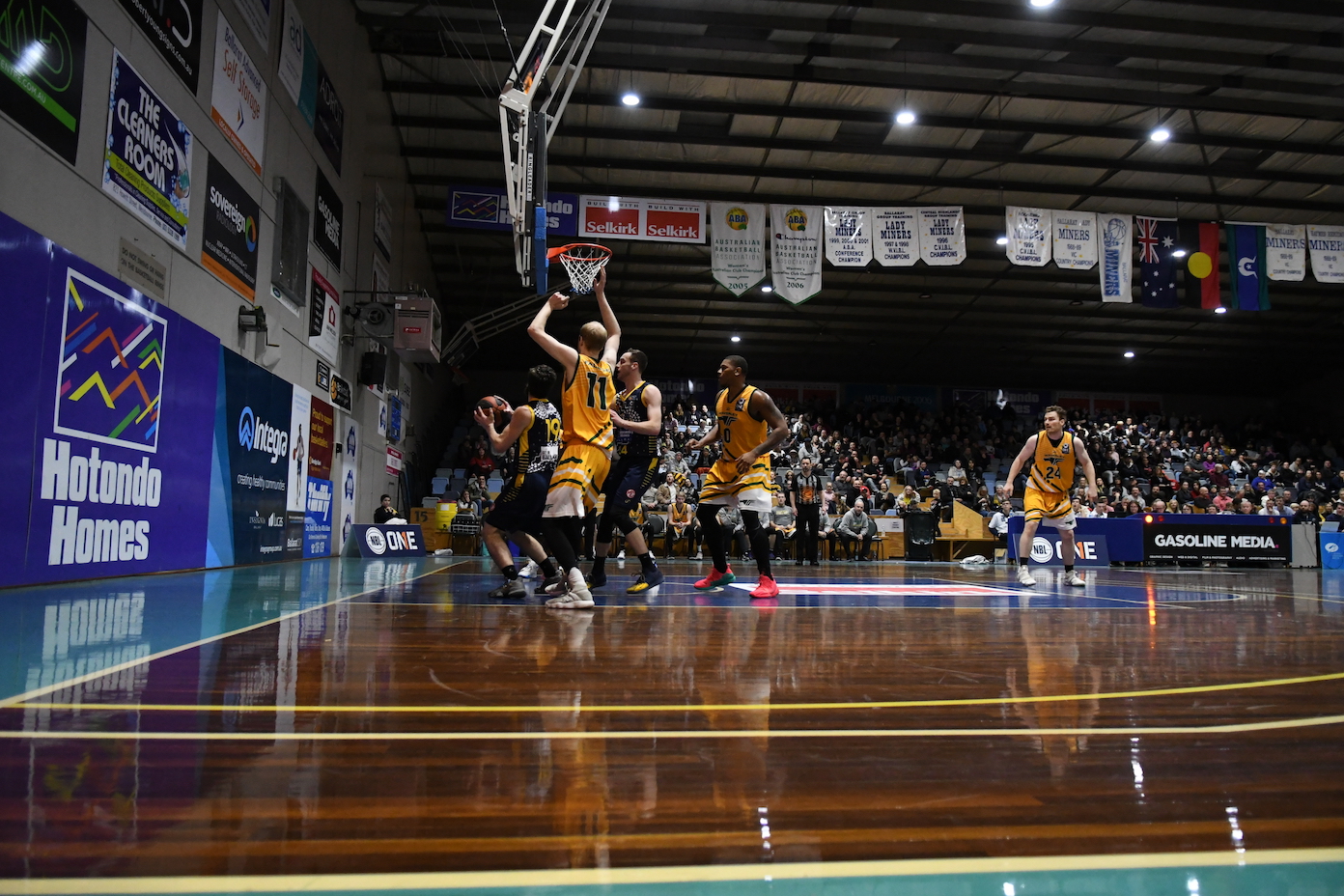 JUST 10 teams remain in the hunt for National Basketball League (NBL)1 finals after a big round of action over the weekend. Seven of the nine games on Friday and Saturday were won by the visiting teams in what would have been a disappointing round for home crowds. Three of the top four is settled with Ballarat Miners, Nunawading Spectres and Frankston Blues all earning double chances this year, while Basketball Australia Centre of Excellence’s season is now complete, currently sitting thirteenth but could slip to sixteenth depending on results in the final round next weekend.

Waverley Falcons’ never-say-die attitude was the highlight on the round as they strung together back-to-back wins over Knox Raiders, and remarkably, minor premiers Ballarat Miners. The on the road win against the Miners was the Falcons best of the season, winning by 13 points on Saturday. The Falcons started and finished strongly which was enough to get them the win in the 90-77 game, as Deondre McWhorter (29 points, 10 rebounds and two assists) and Dylan Travis (21 points, nine rebounds, eight assists and two steals) went to work. Deng Acuoth (21 points, 12 rebounds and three blocks) picked up a double-double for the Miners, while Sam Short (15 points, five rebounds, five assists and three steals) was also prominent for the losing side. The Falcons then backed it up with a 10-point victory over Knox at home, with McWhorter (20 points, 13 rebounds, three steals and two blocks) and Travis (18 points, seven rebounds and five assists) again amongst the best, whilst Bennie Lewis top scored with 26 points. For the Raiders, Cadarian Raines (18 points, 11 rebounds) and Damon Heuir (15 points, six rebounds and four assists) were the two players to reach double-figure points.

Knox Raiders disappointing weekend was compounded by an earlier loss to Bendigo Braves, going down by just two points at home. Heuir again did all he could with 21 points, while James Hunter (13 points, seven rebounds) was the top player for the home side in the 2defeat. For the Braves, they had Ray Turner (26 points, 12 rebounds and three blocks) who was dominant once again, while Mathiang Muo (19 points, six rebounds) and Deonte Burton (12 points, five rebounds) were also busy in the win. The Braves bounced back from a home win the night before when they went down to Albury Wodonga Bandits on Friday. Bendigo led at quarter time but were overpowered after that to lose, 93-82. Muo (22 points, seven rebounds) again had some great work off the boards, while Turner (14 points, four rebounds and two assists) and Matthew Andronicos (13 points, four rebounds and two blocks) were also solid. The Bandits had too many scoring options however as Torren Jones (22 points, nine rebounds and four steals), Deba George (21 points, four rebounds, five assists and five steals) and Ken-Jah Bosley (20 points, four rebounds, seven assists and three steals) all combined to form a dominant scoring trio.

Frankston’s remarkable winning streak continued on the weekend, making it seven consecutive victories following their win over Kilsyth Cobras. In completing the massive 35-point win, the Blues guaranteed themselves a double chance, sitting third on the table with a round to go. They shared the points around, as Lachlan Barker (19 points, three rebounds), Daniel Trist (15 points, 12 rebounds and three assists) and Damon Bozeman (14 points, five rebounds and three assists) were among six players who reached double-figure points. Isaac Turner was a lone hand for Kilsyth with the Cobras missing star Peter Hooley, and Tohi Smith-Milner suffering an injury early in the game, as Turner finished with 28 points and five rebounds. Also giving themselves best chance of a finals spot was Dandenong Rangers who overcame Albury Wodonga Bandits in a 21-point victory on the road. Sam Froling was terrific with 29 points, three rebounds and two assists, while Lucas Barker (21 points, eight assists, five rebounds and three steals) was the Rangers’ best. Bosley was the most prominent scorer for the Bandits with 20 points, four rebounds, three assists and two steals, while Jones racked up a mammoth 19 rebounds to go with his 13 points. Kilsyth did get a win on the weekend when they triumphed over top two side Nunawading Spectres by five points on the road. Turner posted 26 points, whilst Smith-Milner showed his importance to the Cobras with 18 points and 18 rebounds – 16 defensive – to be a serious problem for the Spectres. Tom Wright had a match-high 28 points for the Spectres, as well as five rebounds and five assists, while Lucas Walker (15 points, nine rebounds) was also prominent despite the loss.

Outside the Huskies’ win over the CoE, it was not a great weekend for the Tasmanian sides, with the Huskies going down to Melbourne Tigers by a heartbreaking one-point margin, while North West Thunder suffered defeats at the hands of Ringwood Hawks and Diamond Valley Eagles. The Huskies were blown away by the Tigers in the opening term, but hit back to trail by seven at the main break, and whilst they managed to get back on even terms, fell a points short by the final buzzer. Adams (30 points, eight rebounds) and Dufelmeier (28 points, three rebounds, four assists and two steals) renewed their dominance on the court despite it not quite being enough. Melbourne had a quartet of big scorers, with Dane Pineau (31 points, 11 rebounds) and Nic Pozoglou (18 points, 12 rebounds) picking up double-doubles, as did Michael Luxford (12 points, 11 rebounds). North West Thunder capitulated after half-time, having raced out to a 17-point lead, only for Ringwood to pile on 59 points to 28 in a complete rout. Matthew Fennell (18 points, 10 rebounds) helped himself to a double-double for the Hawks, while Adrien Sturt (16 points, six rebounds and four blocks) and Jacob Gibson (16 points, three rebounds and three assists) were busy. For the Thunder, Nick Banyard (22 points, seven rebounds) top scored, whilst Jordan Bowling picked up a double-double with 15 points and 16 rebounds. In the 14-point loss to Diamond Valley Eagles, Banyard and Bowling combined for 43 points, 22 rebounds, six assists and four steals as the two dominant players in the loss. The Eagles shared it around with three key scorers, led by Logan Hovey (25 points, nine rebounds and three assists) and Anthony Odunsi (25 points, two rebounds and six assists), while Ben Allen (22 points, 14 rebounds, two assists and three steals) had a double-double.