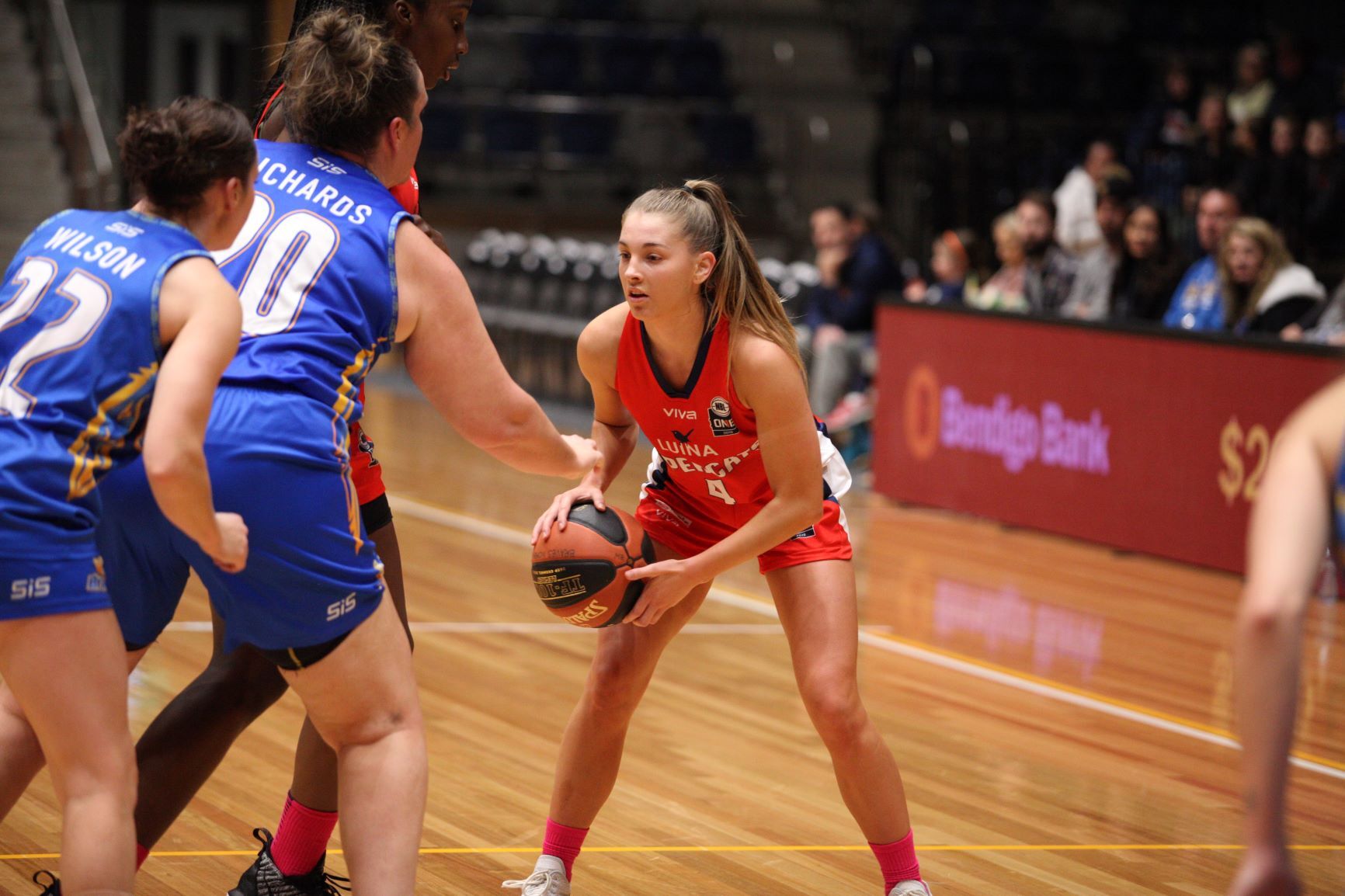 AN Olympian debut for the Melbourne Tigers was just what the doctor ordered as the Tigers strung together two wins on the trot to push their season record into the positive with 5-4 from nine games. Jenna O’Hea‘s introduction to the National Basketball League (NBL)1 competition was positive, as the Tigers knocked off Diamond Valley Eagles and Ringwood Hawks 22 and 18 points respectively. O’Hea picked up 29 points, eight rebounds, three assists, three steals and two blocks against the Eagles, while finishing with 32 points, 13 rebounds and five assists in a dominant performance over the Hawks. Others who stood up across the two games were Louella Tomlinson with a combined 34 points, 21 rebounds, eight assists, four steals and nine blocks, and Monique Conti (28 points, 12 rebounds and eight assists). In defeat, Anneli Maley (Diamond Valley) had 16 points, 15 rebounds and five assists, while Antonia Farnworth (Ringwood) finished with 20 points, four rebounds and two assists.

Another team that had a good weekend was Dandenong Rangers, enjoying wins over Hobart Huskies and Launceston Tornadoes in a successful trip down south. The Rangers had a tight tussle with the Huskies but eventually got clear, 82-77, as Rebecca Cole (27 points, seven rebounds, five assists and two steals) was the standout, while Aimie Clydesdale (21 points, three assists) and Colleen Planeta (10 points, 14 rebounds) were others who impressed. Jennifer Schlott (19 points, two rebounds), Nikki Greene (16 points, 15 rebounds) and Tayla Roberts (14 points, 12 rebounds and five assists) were the crucial players for the home side. In the big win over the Tornadoes, Cole had a massive game, posting a round-high 37 points, three rebounds and seven assists, while Planeta helped herself to another 11 rebounds and four blocks as well as 15 points. For the Tornadoes, Sarah O’Neill was the top shooter with 22 points and six rebounds, while Brittany Hodges managed a game-high 13 rebounds to go with nine points.

Geelong Supercats notched up two wins over Round 6 as well, claiming a 20-point win over Albury Wodonga Bandits on Saturday, before backing up with a 16-point win over the previously undefeated Bendigo Braves. Sara Blicavs (16 points, seven rebounds and five assists), Ezi Magbegor (16 points, three rebounds), Isabelle Bourne (15 points, nine rebounds) and Ebony Rolph (13 points, 11 rebounds) all reached double figures in the win over the Bandits, while Natalie Hurst (12 points, five rebounds) was the top scorer in a losing side. In the top-of-the-table clash, Magbegor produced a double-double with 30 points, 10 rebounds, two steals and two blocks, while Blicavs was busy again with 23 points, eight rebounds and six assists. Kelly Wilson did everything she could with 36 points, nine assists and three steals in defeat, while Gabrielle Richards produced 22 points, 12 rebounds and five assists in the Braves’ loss.

It took seven games, but Ballarat Rush finally broke through for their first win of the season, downing Eltham Wildcats, 80-72. It came after a loss to Kilsyth Cobras the day before in a 22-point defeat. In defeat, Georgia Amoore scored 14 points, two rebounds, three assists and two steals, while Lucy Cochrane had 13 points, six rebounds and two assists. Lauren Nicholson was the thorn in Ballarat’s side, shooting 32 points, seven rebounds and two steals, while Klara Wischer had 15 points, 10 rebounds, six assists, four steals and two blocks. In their win, Olivia Hackmann top scored with 18 points, four rebounds and one steal, while Hsi-le Bao scored 12 points and had eight rebounds and three assists. For the Wildcats, Margaret Mulligan posted 23 points, nine rebounds, two assists and two steals, while Chelsea Schweers posted 17 points and nine rebounds.

The Bandits bounced back from their loss to Geelong Supercats to knock off Diamond Valley Eagles, 90-75. Cherise Daniel posted 25 points, three rebounds and two assists, while Jessie Edwards had a double-double with 17 points and 12 rebounds in the win. Shelby Chesiek sank 19 points and eight rebounds in the Eagles’ loss, but it was the mammoth effort by Maley who finished with 29 points and 22 rebounds that stood out in defeat. Another team that bounced back was Waverley Falcons, who finished with a win over Basketball Australia Centre of Excellence to make them winless after nine games. Carley Mijovic was the dominant shooter in the game with 27 points, eight rebounds, three assists and four blocks, while Kelly Bowen had 16 points, five rebounds, two assists and two steals. In the narrow loss, Paige Price was impressive off the bench with 23 points, eight rebounds and three assists. In the Falcons’ loss to Ringwood Hawks, Mijovic posted another 20 points as well as nine rebounds, while Bowen had 15 points and 10 rebounds. For the Hawks, Farnworth dominated with 25 points, 10 rebounds and four assists, while Cassidy Mihalko (20 points, eight rebounds and two assists) was the other key player in the win.

In other results, Nunawading Spectres proved too good for Southern Sabres, running out 34-point winners, Eltham Wildcats got over the line with a nine-point win over Frankston Blues, while Knox Raiders triumphed by 14 points over Basketball Australia Centre of Excellence.