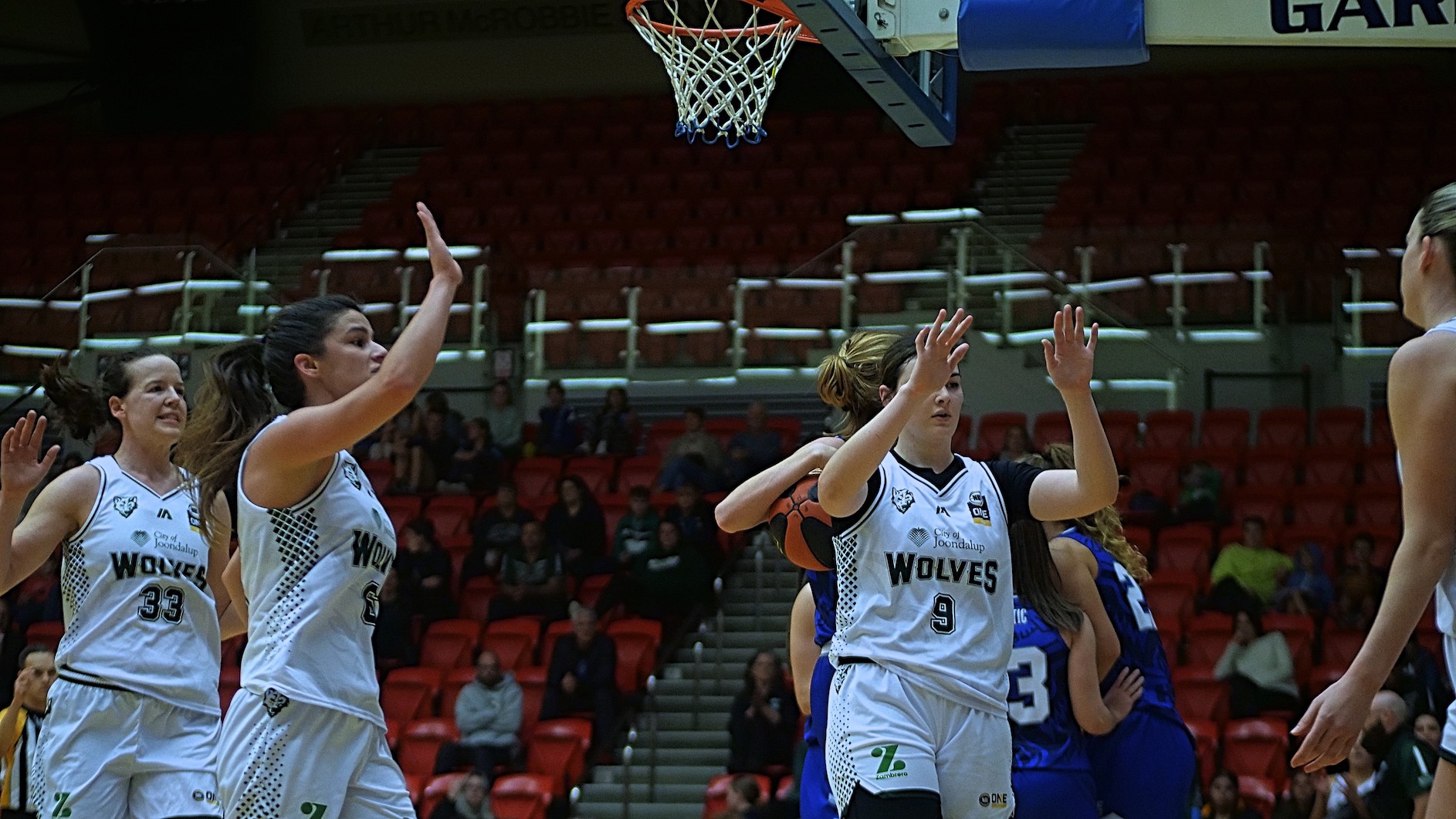 Round 7 Hawks Vs Wolves

AS the National Basketball League (NBL)1 West competition continued over the weekend, both the men’s and women’s divisions had some classic contests, and we recap how all the games went down.

A dominant final term from East Perth Eagles ended the unbeaten streak of Joondalup Wolves with a 17-point triumph at home. The Eagles lead by six points at quarter time, and held that lead right up until the final break, before piling on 21 points to eight in the last stanza to run away with the eye-catching upset win.

Joondalup Wolves did manage to bounce back last night with a seven-point win over Perry Lakes Hawks, 73-66. Kayla Steindl had 25 points, 11 rebounds and two steals in a double-double performance, while Rebecca Benson (12 points, two assists) and Parker-Williams (eight points, nine rebounds, six steals and three assists) all contributed to the cause. Madeleine Dennis (27 points, six rebounds and two assists) and Sarah Donovan (18 points, nine rebounds, three blocks and two steals) were the two best in the Hawks’ defeat.

The next closest result of the round went the way of Perth Redbacks who took the points over a sluggish Mandurah Magic. The Hawks piled on 40-13 in the first half to set up the win, and whilst they lost the second half 45-27, had done more than enough to win 67-58. Makailah Dyer (23 points, six rebounds) and Maddison Allen (nine points, six rebounds, four steals, two assists and two blocks) were the keys for the Redbacks, while Casey Mihovilich (16 points, five steals, three rebounds and three assists) and Carly Boag (seven points, nine rebounds, four assists and two steals) covered plenty of areas for the Magic.

In other results, Rockingham Flames picked up another win to hand Cockburn Cougars a second straight defeat, getting up 71-52, whilst Eastern Suns piled on more pain to South West Slammers with a 53-point shellacking at home. Christina Boag (25 points, 14 rebounds and three assists) and Tayah Burrows (24 points, seven assists and four rebounds) were outstanding for the Flames and countered out the impact of the Cougars’ Jessie Edwards (16 points, 11 rebounds). In the other game, Jewell Williams (24 points, four assists and three rebounds) top-scored for the Eastern Suns, but it was the likes of Mia Jacobs (14 points, 10 rebounds, four steals and three assists) and Ellyce Ironmonger (10 points, 12 rebounds) who picked up double-doubles, and Samantha Roscoe chipping in with a dominant 18points, eight rebounds, four assists and four steals. Zaya Lilly Black (21 points, four steals and three rebounds) and Jasmine Barrett (16 points, five assists, four rebounds and three steals) were the only key scorers for the Slammers.

The match of the round was easy to pick in the NBL1 West men’s division, with Willetton Tigers coming from behind at the final break to win by one point over Goldfields Giants to grab the 74-73 victory. After being level at quarter time, the Giants took advantage and went up by two at half-time and seven by the final break, before the Tigers roared back to life to run over the top of the Giants and secure the 21-13 triumph.

Lakeside Lightning handed Warwick Senators their first loss of the season, posting a 90-61 triumph to continue their fantastic season. Grabbing a 29-point win on the road, the Lightning were lead by Julius Bowie (26 points, seven rebounds) and Kyle Armour (16 points, five assists, three steals and two rebounds). Warwick Senators had Justin King (19 points and two assists) and Cody Ellis (16 points and three steals) who topped up the team’s scoring column.

Perry Lakes Hawks picked up back-to-back wins in Round 7 with victories over Geraldton Buccaneers (27 points) and Joondalup Wolves (31 points) to remain one of the key title contenders this season. Cooper Hamilton (17.5 points, 3.5 rebounds and 2.0 assists), Ben Purser (16.5 points, 5.0 rebounds, 5.0 assists and 2.0 steals) and Mitchell Clarke (16.5 points, 4.0 rebounds and 4.5 assists) were consistent contributors across both games. Matthiang Muo (24 points, 11 rebounds, four assists and two steals) was the top player for the Buccaneers, while Jonathan Wade (34 points, three rebounds) lit it up for the Wolves.

The Wolves picked up a win over Perth Eagles by 33 points, thanks to another 34 points from Wade, who racked up 10 rebounds, three assists and three steals for his troubles. Sioeli Vaiangina (14 points, eight rebounds) also stood out for the victors. Kieran Berry (20 points, five rebounds and two assists) was the dominant scorer for the Eagles. Meanwhile Mandurah Magic defeated Perth Redbacks by eight points (82-74), as Ben Smith (21 points, nine rebounds), Fred Williams (15 points, six rebounds) and Jerami Grace (12 points, five assists and three rebounds) all impressed, though the Redbacks’ Louis Timms (27 points, seven rebounds) and Isaac Gattorna-Hargrave (20 points, four rebounds and four assists) both put up some big numbers.

In other results, Rockingham Flames defeated Cockburn Cougars by 21 points (106-85), whilst in the battle of the winless sides, South West Slammers finally got on the board with a 10-point triumph over Eastern Suns, 90-80. Justin Beard (23 points, five rebounds) and Atem Bior (21 points, seven rebounds) combined well for the Flames against Cockburn’s Jaarod Holmes (17 points, six rebounds) and Seva Chan (17 points, four assists and two rebounds), while the Slammers’ Mitchell Keller (25 points, 11 rebounds and five assists) and Suns’ Ryan Blanchett (20 points, eight rebounds) were the key players for their respective sides.