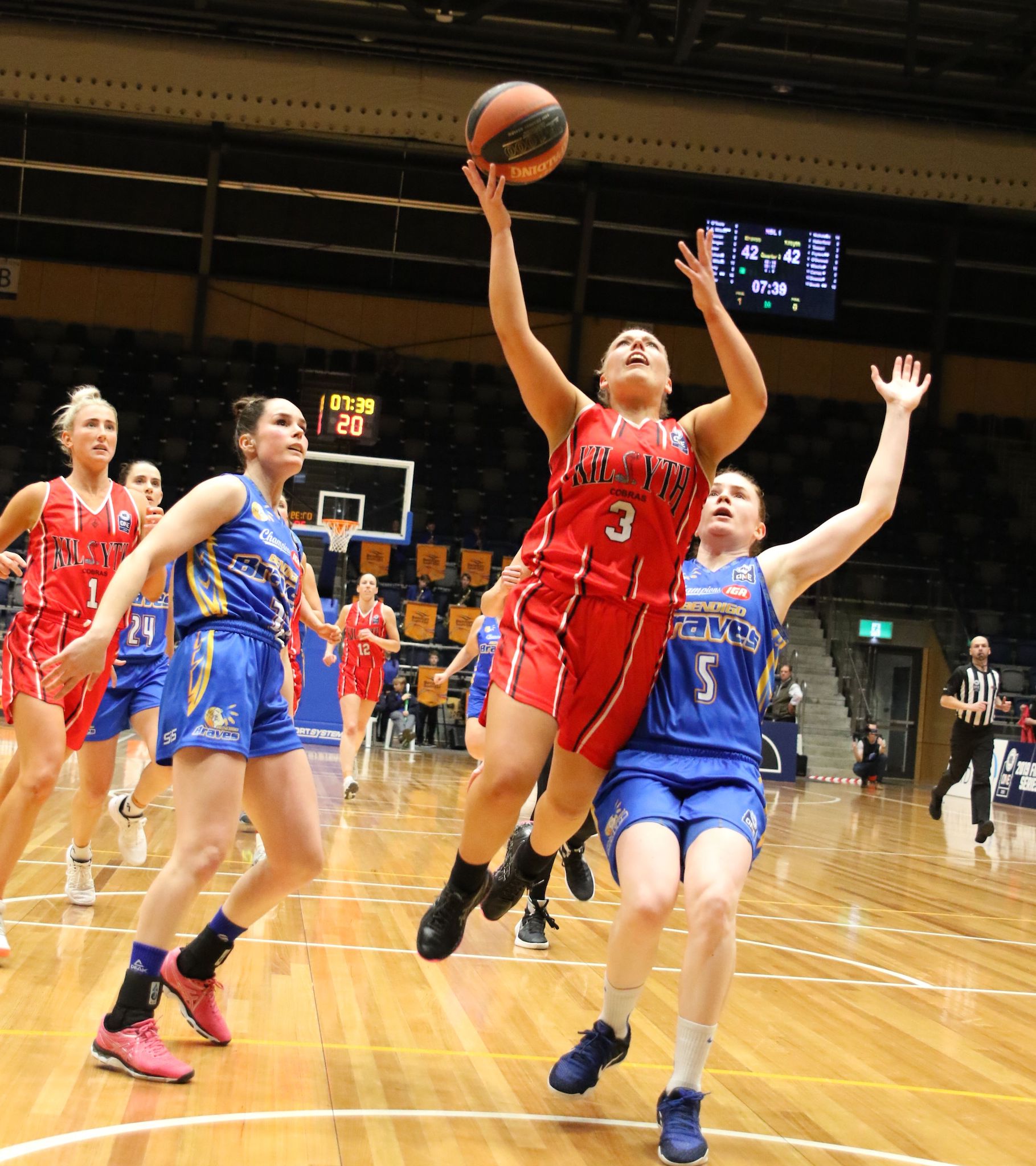 FOUR teams remain in the National Basketball League (NBL)1 Women’s competition after the first two weeks of finals were squeezed into a weekend. Kilsyth Cobras’ upset over minor premiers Bendigo Braves was the biggest talking point of the weekend, while Ringwood Hawks went out in straight sets. It means Nunawading Spectres now take on Kilsyth, while Bendigo face Geelong Supercats in what many originally thought could be the grand final clash.

A dominant first term from Nunawading Spectres has sent Ringwood Hawks packing in straight sets, running out 24-point winners in the semi-final clash yesterday. The Spectres piled on 27 points to seven in the opening term which set up the victory, as they extended the lead by as much as 31 points at the final break before the Hawks cut the final deficit to 24 courtesy of a 26-19 last quarter. Megan Mullings was a lone hand for the home side, posting a game-high 29 points and 13 rebounds in a double-double effort, as Cassidy Mihalko and Danni Bone both scored 11 points and combined for eight rebounds and seven assists as the next best. The Spectres had an even spread across the board with Chelsea D’Angelo putting up 19 points, 10 rebounds and four assists, while Maddie Garrick topscored with 20 points, five rebounds, five assists and three steals. Kathleen Scheer (13 points, six rebounds, seven assists and two blocks) and Rebecca Pizzey (12 points, four rebounds, two assists, two steals and four blocks) were others who stood out in the win.

Bendigo Braves will hope a final term flurry of baskets will set the tone for the Preliminary Final next weekend after bouncing back from a shock Qualifying Final loss. The Braves did not have it all their own way against a plucky Knox Raiders, but did take a nine-point lead into quarter and half-time, before the Raiders cut it back to four by the final break. Luckily for the Braves they settled and took control defensively to restrict the Raiders to just six points in the final term to run away with the 17-point victory. Kelly Wilson led the way with only the second triple-double of the NBL1 Women’s competition this year, recording 13 points, 10 rebounds and 14 assists in a match-winning effort for the Braves. Tessa Lavey scored 20 points, three rebounds, six assists and two steals, while Tess Madgen managed 17 points, six rebounds and two assists. Rebecca Tobin had three steals and seven rebounds to go with her 16 points, while Gabrielle Richards (14 points, 14 rebounds) was also terrific. For Knox, Abbey Wehrung scored 23 points, while Lauren Scherf (14 points, 11 rebounds) and Marena Whittle (10 points, 12 rebounds) picked up double-doubles.

Geelong Supercats moved through to the Preliminary Finals with a strong 15-point win over Ringwood Hawks courtesy of a big first half which set up the win. The Supercats posted 45 points to 25 in a dominant first two terms, before Ringwood cut the deficit to a manageable 12 points by the final break. Luckily for the home fans, the Supercats steadied and ran out 78-63 winners in the end. Sara Blicavs was again super with 23 points, nine rebounds, two assists and three steals, while Ezi Magbegor posted 15 points, five rebounds, three assists, two steals and two blocks in the wing. Zitina Aokuso helped herself to a double-double of 16 points and 12 rebounds, while Alex Duck had 15 points, four rebounds and a mammoth seven steals. For Ringwood, Mihalko scored an impressive 27 points, six rebounds, three assists and four steals, while Mullings picked up a double-double with 15 points, 11 rebounds, two assists and two steals. Antonia Farnworth also tried her best with 13 points and four rebounds in the loss.

Kilsyth Cobras have ripped up the NBL1 Women’s script with a stunning come-from-behind win on the road against the almost previously undefeated Bendigo Braves.The Braves dropped just one game in 20 outings during the NBL1 season, and everything looked to be going to plan early with 22 points to 16 in the opening term, then the home team lead by nine at the main break. As if out of nowhere, the Cobras came to the party in the second half, slamming home 26 points to 11 to lead by six at the final break, then put the foot down again with a 26-17 term to run away 85-70 winners to leave the Bendigo crowd stunned. Lauren Nicholson was unsurprisingly the top points scorer with 26, as well as three rebounds, three assists and four steals, but it was Sarah Boothe picking up a double-double (21 points, 17 rebounds, four assists, four blocks and two steals) who was best on court. Klara Wischer (20 points, eight rebounds and five assists) was also strong across the board, while Alison Downie (12 points, four rebounds and five assists) chipped in to assist the team. For Bendigo the spread was less, with Rebecca Tobin (24 points, 13 rebounds) doing the bulk of the scoring, followed by Wilson (16 points, six rebounds and eight assists), while Richards and Lavey had 12 points each, but combined for just three rebounds and six assists.

Knox Raiders picked up a win in the 2019 NBL1 finals series, downing Dandenong Rangers at the State Basketball Centre by 21 points. It was a dominant win in the end as the Raiders won every quarter on their way to the 86-65 triumph. They lead by five, nine and 18 across the three quarters to put the result beyond doubt and never took the foot off the pedal. Scherf had an equal game-high 22 point as well as 12 rebounds, two assists and a block, while Whittle helped herself to a massive 20 points and 18 rebounds in the win. Wehrung (15 points, three rebounds and three assts) was the other dominant scorer for the Raiders, as Lucy Dawson had seven rebounds to go with her eight points. For the Rangers, Aimie Clydesdale had 22 points and eight assists, while Colleen Planeta recorded another double-double with 19 points and 10 rebounds. Taylah Gillam (10 points, three rebounds) was the other player to reach double figures for the Rangers.