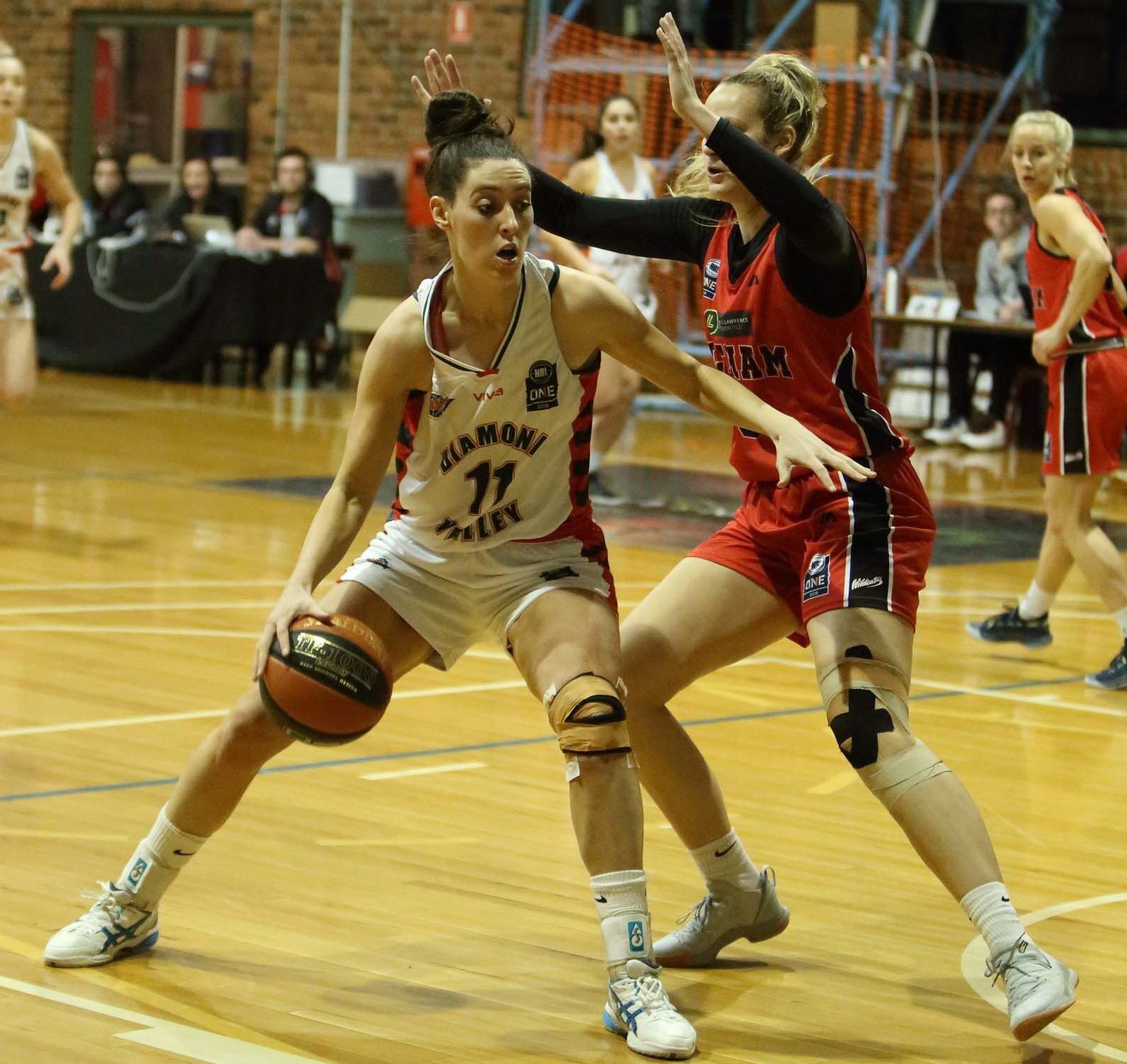 In the shocks of the round, bottom two sides Southern Sabres and Diamond Valley Eagles both picked up their third and second wins respectively to move up the table. The Sabres knocked off Dandenong Rangers by a point to mark the Rangers’ fourth consecutive loss and see Dandenong drop out of the top four for the first time. The Rangers led by as much as eight points at the final break, but a 25-16 final term in favour of the visitors saw the Sabres run over the top of the favourites. Ella Batish sank 21 points and had seven rebounds, while Tenaya Phillips helped herself to 18 points, five rebounds and five assists. Rachel Jarry (10 points, 12 rebounds and four assists) and Amelia Todhunter (four points, 10 rebounds and two assists) were huge off the boards. For the Rangers, Colleen Planeta stepped up with 20 points, five rebounds, three assists and three blocks, while Aimie Clydesdale (16 points, three rebounds) and Rosie Fadljevic (12 points, seven rebounds and two steals) worked hard to reach double-figure points.

Diamond Valley Eagles’ two-point win over Eltham Wildcats was equally as challenging, taking out the game 89-87 after trailing at the main break by six points. A determined second half saw the Eagles open it up and pile on 46 points to 38 to steal the three points and put Eltham’s top eight hopes in jeopardy. Anneli Maley has been a rock of consistency in an otherwise disappointing year for the Eagles, posting 27 points, 16 rebounds and six assists, but this week was joined by her four other starters who reached double-figure points. Shelby Cheslek (14 points, nine rebounds and four steals), Meg Crupi (14 points, three assists), Alex Wilson (13 points, six rebounds and seven assists) and Hope Terdich (12 points, seven rebounds) all impressed in a great team effort for the Eagles. In a losing side, Chelsea Schweers had a equal round-high 39 points to go with two rebounds and two assists, while Margaret Mulligan posted 20 points, eight rebounds and three blocks. In Eltham’s other loss, an equally heartbreaking – but spirited against a top three side – three-point defeat to Knox Raiders, Schweers produced a 27-point, seven-rebound game to lead the way, while Chelsea Brook had 20 points, five rebounds and two blocks. Lauren Scherf (17 points, eight rebounds, five assists and two blocks) led the way for the Raiders in the 82-79 victory, while Abbey Wehrung (13 points, eight rebounds) and Marena Whittle (13 points, five rebounds, three assists and two blocks) were also impressive.

The win for Knox was an important one, having come after a 17-points loss to Kilsyth Cobras who took full advantage of Dandenong’s shock defeat to move into fourth spot on the table. The Cobras made it eight consecutive victories with the win over Knox, as Lauren Nicholson produced an equal round-high 39 points – shooting at 68 per cent from the floor and 80 per cent from three-point range – as well as 10 rebounds, four assists and four steals in an unbelievable game. Kara Tessari (12 points, 10 assists and three rebounds) and Sarah Boothe (10 points, 10 rebounds and two assists) both picked up double-doubles, while Klara Wischer was busy with 15 points, four rebounds and three assists. For the Raiders, Scherf helped herself to 15 points, five rebounds and two blocks, while Whittle had 16 points, seven rebounds and three assists in the defeat.

Another team that took advantage of Dandenong’s loss was Nunawading Spectres, moving to just percentage behind the Rangers in sixth. The Spectres’ fortress at Nunawading Basketball Centre continued as their record there stretched to 6-1, with a nine-point win over Melbourne Tigers. That result looked in doubt at the final break as the Tigers overturned a 10-point half-time deficit into a four-point lead at the final change. Despite the momentum with the visitors, Nunawading dug deep and produced a 29-16 final term to win, 75-66. Rachel Antoniadou top scored with 17 points, three assists, three rebounds and two steals for the Spectres, while Rachel Brewster (14 points, seven rebounds), Eliza Chilcott (12 points, nine rebounds and three assists) and Chelsea D’Angelo (12 points, four rebounds) were all impressive on the day. For the Tigers, Molly Matthews picked up a double-double with 16 points and 11 rebounds, as Kasey Burton just missed out with 15 points and nine rebounds.

Meanwhile at the top of the table, Geelong Supercats reminded Ballarat Rush of what it takes to take down the best, running away with a 23-point win at home. The Supercats led early with a 12-point advantage at quarter time, and aside from the Rush cutting the half-time deficit back to five, it was Geelong’s game to lose and they showed that with a dominant 41-23 second half to make it 12-straight wins. Sara Blicavs (22 points, 10 rebounds and five assists) and Ezi Magbegor (16 points, nine rebounds, three assists and three blocks) were at their best, while Zitina Aokuso‘s (10 points, eight rebounds, four assists, two steals and four blocks) work off the boards was rewarding for the winners. Unfortunately for the Rush, it was a one-player show with Chanise Jenkins (30 points, nine rebounds and five assists) picking up half of her team’s points, while Hsi-le Bao had 12 rebounds – eight defensive – to stand up when the Supercats were attacking.

In other results, Ringwood Hawks won a crucial game against Waverley Falcons to remain in the top eight, coming from seven points down at half-time to win, 71-67. Megan Mullings (27 points, 10 rebounds and two blocks) and Cassidy Mihalko (22 points, six rebounds, four assists and three steals) did all the damage on the scoring front for the Hawks, while Kelly Bowen (18 points, seven rebounds and two assists) was the sole major scorer for the Falcons. In the all-Tasmanian battle, Hobart Huskies’ fast start of 31 points to 18 helped them race to a 90-69 victory over Launceston Tornadoes, ending the Tornadoes hopes of a finals berth, while keeping their own slim chances alive. Tayla Roberts helped herself to a massive game of 18 points, 12 rebounds and four assists, while Jennifer Schlott (17 points, eight rebounds and nine assists) came agonisingly close to a rare triple-double. Sharna Thompson (17 points, seven rebounds) and Nikki Green (14 points, 13 rebounds, two steals and three blocks) were others who impressed for the Huskies. Stella Beck (23 points, 19 rebounds, four assists and three steals) was magnificent in the Tornadoes’ defeat. While Sarah O’Neill tried hard with 14 points and eight rebounds. In the other game, Frankston Blues continued their hunt for an unlikely finals berth after a slow start, posting a 12-point win over Basketball Australia Centre of Excellence (CoE) in the nation’s capital. Shereesha Richards was the star for the Blues, posting 26 points, 12 rebounds and three steals, while Steph Reid (23 points, five rebounds, seven assists and three steals) was equally as dominant. Jade Melbourne came off the bench to sink 17 points, four rebounds and two assists for the CoE, while Gemma Potter had 14 points, six rebounds and two assists in the loss.