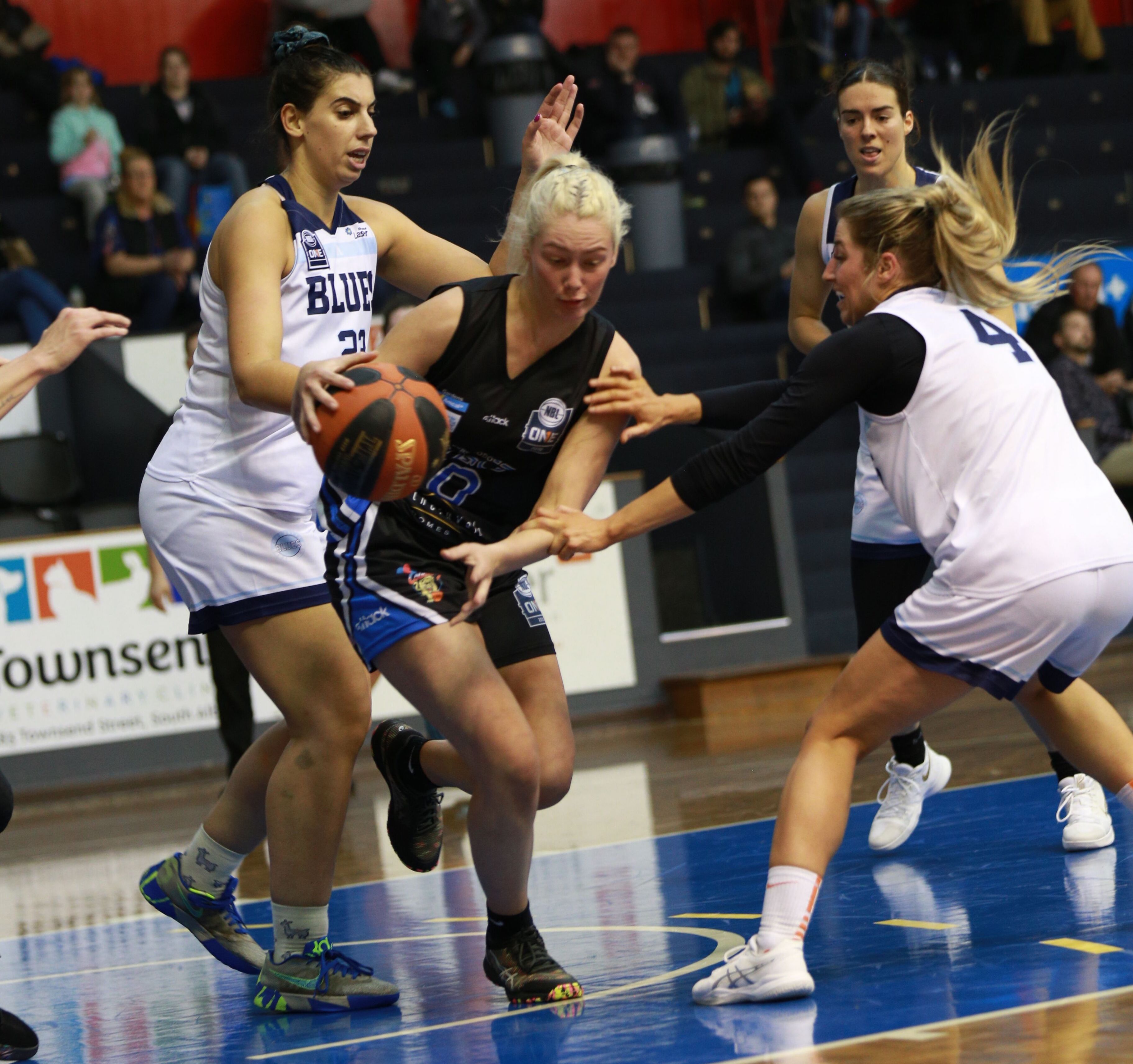 THE gap between the top eight and bottom 10 in the National Basketball League (NBL)1 competition has increased, with Albury Wodonga Bandits’ victory over Frankston Blues, and losses to both Melbourne Tigers and Eltham Wildcats making it a six-point differential between the Bandits and Tigers. The Bandits proved to be more than a handful for the Blues, winning three of their four quarters on the way to a comfortable 22-point victory. Jessie Edwards had a night out with 32 points, eight rebounds, three assists and two blocks, while Cherise Daniel (17 points, eight rebounds, three assists and three steals), Emilee Harmon (13 points, nine rebounds and five assists), Emma Mahady (14 points, four rebounds and eight assists) and Natalie Hurst (15 points, two rebounds and five assists) all made it a dominant performance by the Bandits’ starting five outfit. For Frankston, Taylor Lee (24 points, six rebounds and two assists) and Shereesha Richards (21 points, nine rebounds) were the two that stood up in the defeat.

The win was important for the Bandits considering Melbourne had knocked off Launceston Tornadoes the night before. The Tigers came from five points down at half-time to run out eight-point victors courtesy of a 13-point second half advantage. Louella Tomlinson topscored with 28 points, 14 rebounds, six assists and four blocks in a huge effort, while Monique Conti was also impressive with 23 points, three rebounds and two assists, as was Briana Gray (15 points, nine rebounds and two blocks). Stephanie Gardner was the dominant player on the court, sinking 31 points for the home side, while also recording 11 rebounds and four assists. Stella Beck had 19 points, 10 rebounds, five assists and three steals in the other player to pick up a double-double for the Tornadoes. Melbourne could not have the same luck in the match against Hobart Huskies, ruing a slow start that saw them 13 points down at quarter time, before hitting back but falling five points short in a five-point defeat, 86-81. Kasey Burton was the key scorer for the Tigers in this game with 26 points, eight rebounds, five assists and two steals, while Molly Matthews had 17 points and six rebounds, and Tomlinson picked up another 11 rebounds to go with her nine points. For the winners, Jennifer Schlott continued her great season with 34 points and six rebounds, while Nikki Greene picked up a double-double with 10 points and 12 rebounds. Sharna Thompson (21 points, five rebounds and four assists) and Tayla Roberts (11 points, nine rebounds and two assists) were the other two players who impressed in various areas of the game.

Ringwood navigated its way through a tough round of fixturing to end the weekend how it had started – in fourth spot. The Hawks knocked off Nunawading Spectres in a thrilling five-point win, before going down to Knox Raiders by just three points in an equally tight contest. In the victory, it was a second half comeback by the visitors, shooting 43 points to 33 after trailing by five at the main break. Cassidy Mihalko led the way with 25 points and a field goal percentage of 71.4, as well as nine rebounds and one steal. Megan Mullings picked up a double-double with 12 points, 10 rebounds and four steals, while Danni Bone was also prolific with scoring, posting 16 points, three rebounds, three assists and four steals. Rachel Antoniadou was the key scorer for the losers with 18 points, four rebounds and two assists, while Maddie Garrick stepped up to record 14 points, five rebounds, four assists and two steals. Rebecca Pizzey also picked up a double-double with 12 points, 14 rebounds and two blocks, while Kathleen Scheer (12 points, five rebounds and two steals) was solid. In the tight loss to the Raiders, the Hawks could not quite make the up the six-point quarter time deficit, cutting it back to three by the final break. Mullings did all she could with another double-double thanks to 27 points, 11 rebounds and four steals, while Mihalko (14 points, four rebounds) and Amanda Meinking (11 points, 15 rebounds) were also superb. For the winners, Marena Whittle dominated with 26 points of her own as well as nine rebounds, three assists and two steals, while Bec Ott (12 points, four rebounds and four assists) and Bree Whatman (11 points, three rebounds, seven assists and two steals) were others who finished the game with impressive numbers.

The top side had to work for it, but title favourites Geelong Supercats got the job done on the road against Southern Sabres, 66-59. The Supercats did enough in the first half to open up a nine-point lead and hold off the Sabres in the second half on their way to a seven-point triumph. Sara Blicavs (23 points, 12 rebounds and three steals) and Zitina Aokuso (17 points, 10 rebounds, two assists and two steals) both picked up double-doubles while Rachel Jarry (13 points, eight rebounds, four steals and two assists) and Amy O’Neil (14 points, four rebounds, three assists and two steals were the two standout players from the losing side. In the Sabres’ loss on the road against Waverley Falcons, a disappointing middle two terms led to the visitors going down 82-73. Tenaya Phillips (26 points, 13 rebounds, three assists and four steals) was the clear best for the Sabres in the loss, while Jarry was the other prominent scorer with 12 points and seven rebounds. For the Falcons, Kelly Bowen (23 points, 13 rebounds, two assists and three steals) and Tegan Cunningham (17 points, 13 rebounds, two assists and two steals) picked up double-doubles, while Renae Mokrzycki helped herself to 15 points, four rebounds and four steals.

In the last couple of games, Kilsyth Cobras kept their top four hopes alive with an important 19-point win over Dandenong Rangers, while Bendigo Braves dominated Eltham Wildcats to make it difficult for the Wildcats to recover for finals. Kilsyth were on fire from the opening term, racing out to a 10-point quarter time lead and were never headed from there, triumphing 80-61. Sarah Boothe posted a double-double of 24 points and 13 rebounds as well as four assists and five steals, while Lauren Nicholson was another dominant force for the Cobras, finishing with 23 points, four rebounds and two assists. For the Rangers, Taylah Gillam topscored with 19 points, as well as four rebounds and three assists, while Colleen Planeta helped herself to a double-double of 12 points and 12 rebounds in the loss. In Bendigo’s massive 96-60 win over Eltham, the Braves handed the Wildcats their fifth consecutive loss, leaving them two games adrift of the top eight. Rebecca Tobin posted a massive double-double of 22 points, 13 rebounds, three assists and three blocks, while Kelly Wilson (19 points, six rebounds and 14 assists) also collected one. Gabrielle Richards (16 points, seven rebounds) and Tessa Lavey (14 points, four assists and three steals) also impressed throughout the match. Kiara Mountford (16 points, six rebounds), Dyani Ananiev (14 points, three rebounds) and Vanessa Panousis (10 points, seven rebounds and three assists) were the top players for the Wildcats.