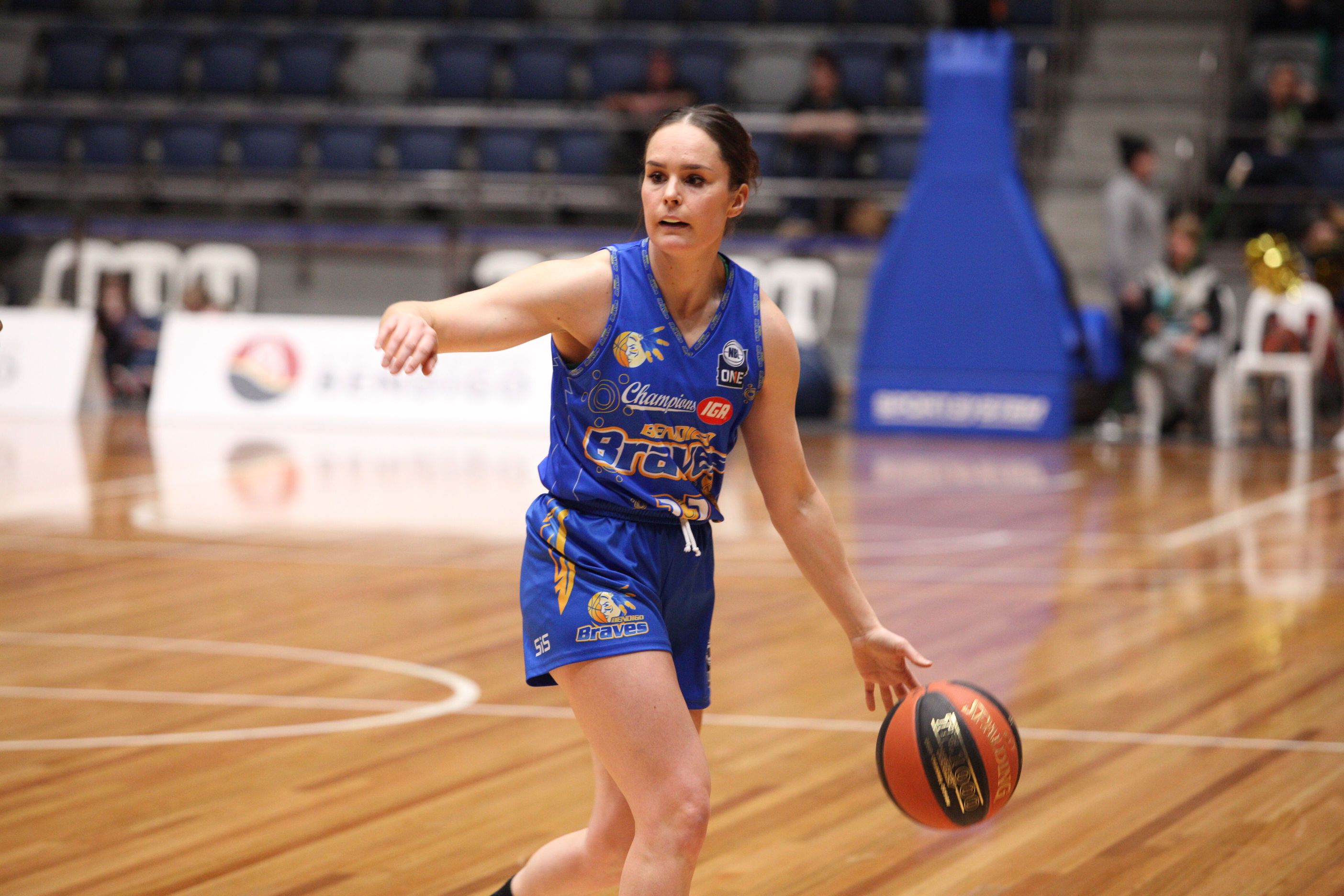 WITH two wins separating seventh from eighth in the National Basketball League (NBL)1, very few spots remain for a finals opportunity with four teams still contesting for eighth. The Bendigo Braves and Geelong Supercats have cemented their positions in the top-two, earning double chances with the Ringwood Hawks and Kilsyth Cobras still able to drop out of the top-four in the final round.

The Bendigo Braves opened the round continuing their monstrous win-streak, adding their tenth consecutive win (94-49) against the Albury Wodonga Bandits. The loss puts Albury in tough spot for next week, finishing the round in 9th position below Waverley Falcons who boast six consecutive wins. Tessa Lavey led scoring for the Braves, amassing 22 points, five rebounds and three assists in the win, while Rebecca Tobin (16 points, 13 rebounds and five assists) and Kelly Wilson (13 points, seven rebounds and 12 assists) both snared double-doubles. For the Bandits, Emilee Harmon was the only player to record double-digits, with 12 points, eight rebounds and two assists, alongside Jessie Edwards with nine points and four rebounds. Following their win at home, the Braves quickly found their 11th consecutive win and top spot after beating the Knox Raiders (79-96) on the road. Bendigo’s impressive second term (12-28) decisively took Knox out of the game, despite keeping close for the remaining terms. Again, Tobin was immense in the victory, snaring a huge double-double with 21 points and 22 rebounds, alongside teammates, Wilson (17 points, six rebounds and 10 assists) and Gabrielle Richards (13 points and 11 rebounds), who also finished with double-doubles. For the Raiders, Rebecca Ott led scoring with 19 points, three rebounds and six assists, with Briahna Whatman also impressing with 15 points and seven assists.

Basketball Australia managed to double their total wins from three to six this round, beating the Southern Sabres (79-80) for their third consecutive win in overtime. With both sides out of contention, it simply becomes a battle to stay off the bottom. Melbourne was impressive again, recording a double-double with 29 points and 14 rebounds, while Smith stood up to record her first double-double of the round with 18 points and 10 rebounds. For the Sabres, Rachel Jarry also picked up a double-double 25 points and 10 rebounds, while Amy O’neill managed 25 points with five rebounds in loss.

In a battle for top-four, the Nunawading Spectres fall to the Kilsyth Cobras (72-80) in a tight game at home. The loss makes it difficult for the Spectres to break into top-four territory in sixth with seventh threatening, while the win for the Cobras has them contesting in fourth. Lauren Nicholson had a big night for the Cobras, recording 32 points, seven rebounds and four assists, with Kara Tessari (11 points, two rebounds and three assists) and Sarah Boothe (10 points, seven rebounds and two assists) also impressing on the night. For the Spectres, Maddie Garrick led scoring with 25 points, while Kathleen Scheer (11 points and seven rebounds), Rebecca Pizzey (11 points and six rebounds) and Rachel Brewster (11 points and three rebounds) combined well in the loss.

In Kilsyth’s second outing they faced a 71-78 loss at the hands of the Frankston Blues. The Blues keep their finals hope alive with the win on the road, putting the Cobras’ second chance in jeopardy for next week. Shereesha Richards put on a big performance with 30 points and 19 rebounds and Taylor Lee came close to triple-double territory with 22 points, eight rebounds and seven assists. For the Cobras, Nicholson (25 points, nine rebounds and five assists), Alison Downie (14 points and eight rebounds) and Klara Wischer (12 points, 11 rebounds and three assists) were strong in the loss.

The Dandenong Rangers sit two wins ahead of eighth in seventh after collecting a tight win over the Albury Wodonga Bandits. This loss, and the one to the Braves, puts Albury’s finals hopes in jeopardy – nursing three consecutive losses at a pivotal moment in the season. Rebecca Cole led scoring for the Rangers, racking up 37 points, three rebounds and seven assists alongside teammate Colleen Planeta who had 21 points with six rebounds. For the Bandits, Edwards impressed once again with 31 points, while Hanna Zavecz followed close with 24 points.

In the final game for the round, the Melbourne Tigers faced off against the Hobart Huskies where they kept their final hopes just in reach with 102-75 win. Monique Conti recorded 36 points, six rebounds and 12 assists on her way to a double-double. Teammates, Briana Gray (25 points, nine rebounds and four assists) and Molly Mathews (19 points, seven rebounds and two assists) were similarly impressive. For Hobart, Sharna Thompson notched up 29 points from 33 minutes, while Tayla Roberts, Nikki Greene and Tayla Stevenson all finished with eight points.