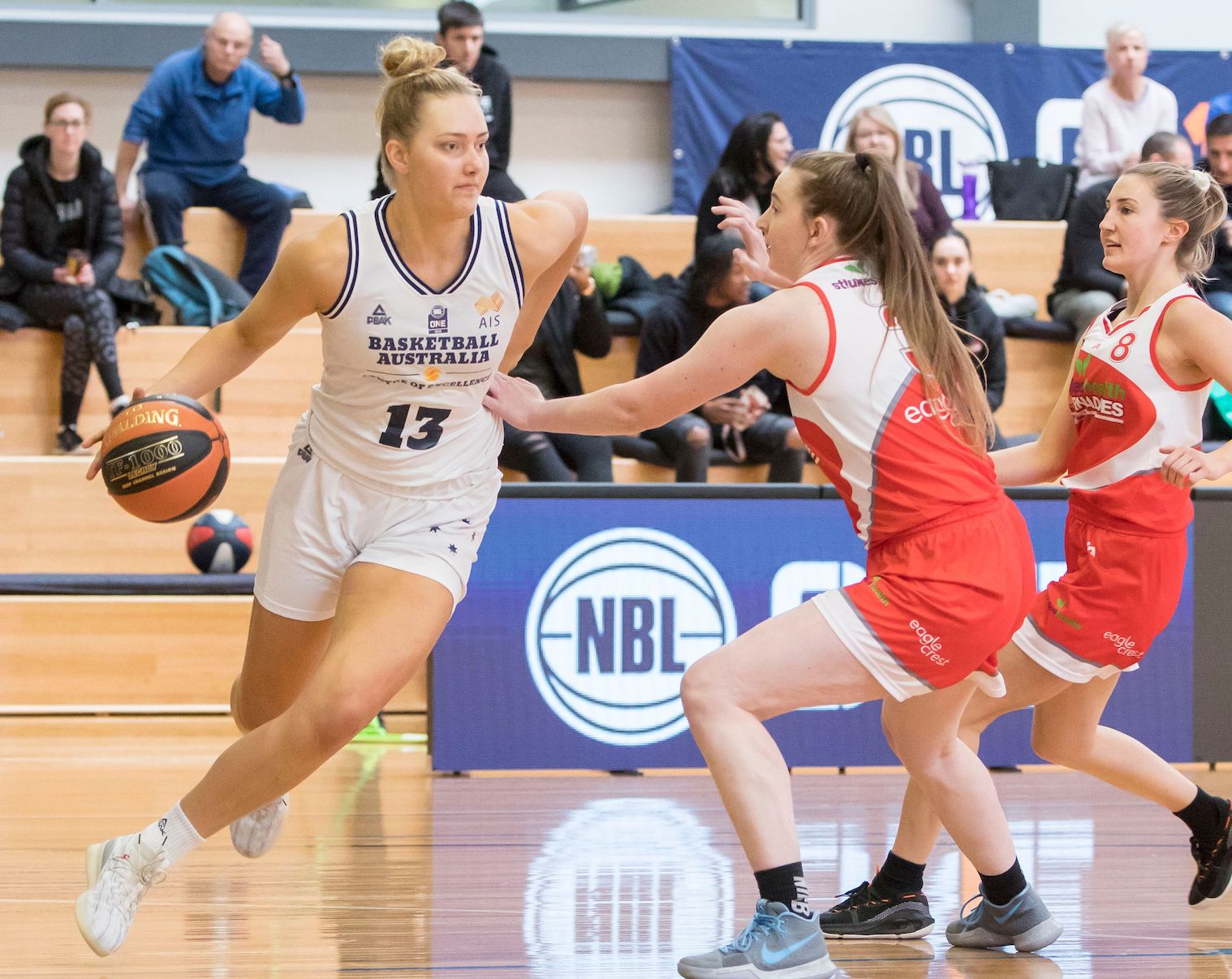 IT was a weekend to remember for the struggling Basketball Australia Centre of Excellence (CoE) and Ballarat Rush, while one to forget for Launceston Tornadoes. The CoE played three games across the round, and having not won a game in 11 starts, were desperate to get on the board. They did just that not once, but twice, defeating fellow bottom two side Diamond Valley Eagles, and then smashing Launceston Tornadoes by 37 points with a loss to Waverley Falcons in between. In the drought-breaking win against the Eagles, the CoE had a strong start to lead by 11 points at the first break and then held the home side at bay until a late charge by Diamond Valley saw the final deficit cut to eight. Lily Scanlon posted 19 points, while Ashlee Hannan (12 points, seven rebounds) and Jade Melbourne (12 points, eight rebounds) were also impressive off the boards. For the Eagles, it was mostly Anneli Maley (27 points, 16 rebounds, three assists and two blocks) who stood out, while Shelby Chesiek (20 points, eight rebounds, three assists, five steals and two blocks) and Alex Wilson (11 points, five assists and two steals) who contributed strongly as well without a lot of help.

The next day the CoE suffered a 14-point loss at the hands of Waverley despite a promising start. The young stars led by 10 points at half-time, but a 43-19 second half saw the home team run over the top of them. Kobe King-Hawea had 13 points, five rebounds, two assists and two blocks in the loss, while Agnes Emma-Nnopu had 10 points, five rebounds, three steals and three blocks. For the Falcons, Tegan Cunningham top scored with 16 points, as well as eight rebounds, two steals, while Kelly Bowen (11 points, six rebounds) and Jessica Bygate (10 points, seven rebounds) were also good under the post. In the massive win over Launceston, the CoE led from the start and never looked back with a season-record six players reaching double-figure points for the winners in the 102-65 victory. Kelsey Rees finished with the most, posting up 16 points and 11 rebounds, while Hannan also picked up a double-double with 12 points and 14 rebounds. Gemma Potter (12 points, eight rebounds and six assists) and Millie Prior (13 points, 11 rebounds, three assists, two steals and two blocks) were others who stood up. For the Tornadoes, it was a disappointing performance with just Stephanie Gardner (25 points, three rebounds, two assists) and Sarah O’Neill (17 points, 10 rebounds and four assists) ones who did damage to the opposition.

Unfortunately for the Tornadoes, it was Launceston’s second defeat in as many days, also going down to Ballarat Rush, 130-94. The Rush found a way to score with ease in one of the most dominant team performances of the year – recording seven of a possible eight players reaching double-figure points. Three players picked up double-doubles with Chanise Jenkins (22 points, 13 assists and nine rebounds) one rebound away from a triple-double. The other standouts were Laura Taylor (26 points, 15 rebounds and four assists) and Lucy Cochrane (10 points, 10 assists), while Olivia Hackmann (19 points, six rebounds and four assists) and Georgia Amoore (19 points, four assists) were also prolific. For the Tornadoes, O’Neill (32 points, three rebounds and three assists) and Gardner (20 points, three rebounds and three assists) were again the two dominant players. The win was the first of two for the Rush who made it four consecutive victories, toppling Southern Sabres by 18 points on Sunday. Hackmann was again impressive with 19 points, five rebounds, two assists and two steals, while Jenkins picked up another 16 points, five rebounds, five assists and massive seven steals. The standout on court for the Rush was Hsi-le Bao with the center having a double-double of 17 points and 13 rebounds. For the Sabres, Rachel Jarry (31 points, 15 rebounds and three assists) did all she could in defeat, while Sherry Glennie picked up 15 points, nine rebounds and three assists.

In a top-of-the-table battle, Geelong Supercats jumped one game clear against Dandenong Rangers to make it nine consecutive wins. The Supercats are yet to lose at home this season, and won 71-55 against a strong Rangers outfit. Sara Blicavs (18 points, 12 rebounds) and Zitina Aokuso (16 points, 13 rebounds) picked up double-doubles while Ezi Magbegor continued her good form for the winners with 12 points and eight rebounds. For the Rangers, Colleen Planeta also recorded a double-double with a team-high 19 points and 14 rebounds, while Aimie Clydesdale (12 points, five assists) was the only other player on the losing side to reach double figures. It was a testing weekend for the Rangers, who also went down to third placed Bendigo Braves, who stole the Rangers’ top two spot in the process. Kelly Wilson‘s form for the visitors continued, downing 20 points, eight rebounds, four assists and two steals, while Gabrielle Richards (12 points, 10 rebounds) and Bianca Dufelmeier (10 points, seven rebounds) were strong across the court. Rebecca Tobin also worked tirelessly (eight points, 13 rebounds) owning the boards. For the Rangers, Clydesdale recorded a team-high 21 points as well as three assists and two blocks, while Planeta was again arguably the team’s best with 14 points, nine rebounds, two assists and three blocks.

Bendigo Braves passed the litmus tests against the Rangers, and fellow top four side Nunawading Spectres on the weekend, defeating the Spectres by six points. Tobin had an evening to remember with a massive 21 points, 18 rebounds, three assists and two steals, while Kelly Wilson dominated as the playmaker, picking up 22 points, eight assists and seven rebounds, with her points tally likely to be more had it not being for her inaccurate 23.1 per cent field goal percentage. The Spectres were even more inaccurate from the field, with just 27 of a possible 72 shots made on the night. Chelsea D’Angelo led the way with points (18), while Kathleen Scheer (14 points, nine rebounds, four assists, two steals and two blocks) and Eliza Chilcott (nine points, 12 rebounds and nine assists) were also strong, the latter of whom narrowly missed out on a triple-double.

Knox Raiders shuffled into fourth spot with a commanding 72-46 win over Diamond Valley Eagles. Bree Whatman recorded 15 points, seven rebounds, four assists and two steals, while Marena Whittle helped herself to 13 points, nine rebounds and five assists. Lauren Scherf had a team-high 12 rebounds to go with her eight points, six assists and four blocks, while for the Eagles, Chesiek (11 points, six rebounds) was the only player to reach double figures, and Maley (nine points, 15 rebounds) impressed once again for the Eagles. The Raiders made it two from two with a 12-point win over Melbourne Tigers. Whittle (24 points, 15 rebounds, four assists and six steals) stood out, while Bec Ott had 24 points, three rebounds and three steals in the win. Scherf again stood tall with a double-double comprised of 16 points and 10 rebounds, while Santomaggio added another 16 points to her weekend tally. For the Tigers, Monique Conti was the clear standout with 35 points, four rebounds, five assists and two steals, while Molly Matthews and Louella Tomlinson both picked up identical double-doubles (11 points and 10 rebounds).

In the other two games, Hobart Huskies suffered an over-time loss to Eltham Wildcats, and in the two side’s only games for the weekend, Albury Wodonga Bandits went down to Kilsyth Cobras by 13 points at home. The best contest was left until last with the wildcats trailing by 15 points at the first break then dominating the next two quarters to lead by six at the final break. Not content to allow the game to slip, Hobart posted 26-20 in the final term to level the scores, only for the Wildcats to win in overtime with a 15-13 term, leading to a 105-103 win. Three players picked up more than 20 points for the winners, with Chelsea Schweers (29 points, six rebounds and three assists), Chelsea Brook (22 points, eight rebounds, four assists and three steals) and Abbey Ellis (11 points, eight rebounds, four assists, two steals and two blocks) the top players for Eltham. For the Huskies, Jennifer Schlott feasted on points with a game-high 31 points, five rebounds, eight assists and two steals, while Collins (26 points, six rebounds, two assists) and Thompson (20 points, seven rebounds and three assists) were impressive for the second time on the weekend. In the final game, Kilsyth grabbed the points against Albury Wodonga up on the border, as Lauren Nicholson had a day out, posting 26 points, seven rebounds and five assists, while Alison Downie (15 points, 10 rebounds) had a double-double and Sarah Boothe (eight points, 13 rebounds) was impressive off the boards. For the Bandits, Emma Mahady topscored with 16 points, four rebounds and two assists, Cherise Daniel had 16 points and five rebounds, and Natalie Hurst posted 11 points, six rebounds, three assists and three steals in the loss.