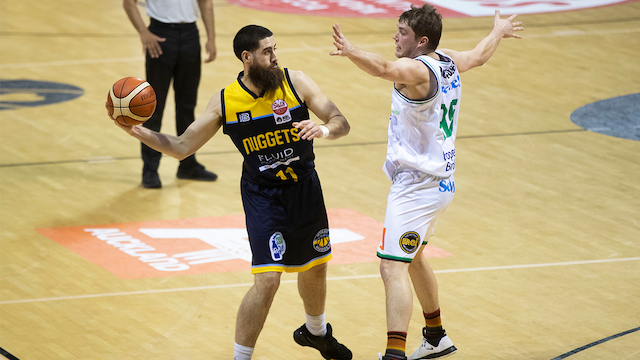 OTAGO Nuggets have justified their top seeding from the 2020 Sal’s National Basketball League (NBL) regular season with a vital 25-point qualifying final win over a Manawatu Jets side missing the league’s best player this season. Otago went in full strength for the top of the table clash, and came out with its fourth win in as many attempts, dominating the opening three terms to rest up in the final term ahead of the semi-final. With Sal’s NBL Most Valuable Player (MVP) Tom Vodanovich a late out of the contest, life was always going to be difficult for the Jets, who struggled to have the same scoring output without their number one big man, going down 105-80.

Once word that Vodanovich would miss out got out, the Nuggets went from favourites to raging favourites, but they still needed to get it done on the court. Knowing that the top ranked side in the semi-finals would play the lowest ranked remaining team, posting a win in the qualifying final became important. With all their big guns in the line-up, the Nuggets hoped to get off to a strong start, and that they did.

Jordan Ngatai and Jordan Hunt had a couple of baskets on the board in the opening minute, as a couple of missed shots and then a turnover by the Jets already had them on the back foot. Ashton McQueen quickly came to the party with five points of his own off Hyrum Harris assists for the Jets to regain the lead, only for Josh Aitcheson to take it straight back. The teams traded blows in those opening few minutes, before the Jets started to make some mistakes through turnovers and fouls.

Otago took full control of the moment, piling on nine straight points to lead 16-7 with less than five minutes to play. Taane Samuel finally broke the drought for the Jets with a couple of free throws, but a layup from Akiva McBirney Griffin followed by a Richie Rodger triple – off a Jets turnover – extended the lead out to a game-high 12 points. McQueen and Samuel seemed to be the biggest resistance from the Jets, as they and Jayden Bezzant got the second placed side back within eight points. Six consecutive points to the Nuggets – four from Kane Keil and two from Jarrod Kenny – blew the lead out to 14 with 37 seconds to play, but a late Nelson Kirksey trey helped draw his side within 11 at the first break.

The second term did not give Jets fans much more hope as the Nuggets piled on the first five points of the quarter to build a handy 16-point lead and each time the Jets trained a shot, the Nuggets responded, both from the inside and outside. The top two teams have not been afraid to register points from beyond the arc, and that was on show again, while Harris was producing some nice dimes throughout the first half to keep his team alive. Then the facilitator got his first points with an important triple with four and a half minutes left on the clock, countering that of Darcy Knox moments earlier, but the Jets were still 14 points in deficit.

Following a Nicholas Fee three-point jumper with 3:43 left on the clock, the Jets trailed 35-46 and needed a spark. Instead, this was where the game was won, as the Nuggets piled on the last seven points of the quarter to blow the half-time margin out to 18, with a Kenny layup in the last few seconds exemplifying why the top side was in firm control of the contest with a 53-35 advantage at the main break.

The Nuggets showed no signs of slowing down in the third as they pushed the lead to beyond 20 thanks to baskets from Kenny, Hunt and Ngatai, and answering each of the Jets’ makes with one of their own. Manawatu was rattle and it showed when Kalib Marsich-Mullins fouled Keil from outside the arc midway through the term and then the long-range shooter drained all three free throws for his team to hold a 24-point lead.

Each time the Jets would score, the Nuggets would answer, as Jack Andrew came off the bench to string a couple of baskets together including an impressive dunk, as Samuel was trying all he could to get his side going. By this time, the Nuggets trio of Hunt, Kenny and Ngatai would rest up with Coach of the Year Brent Matehaere confident his chargers would finish the job off in the last 15 minutes.

Six straight points to the Nuggets leading into the final minute of the quarter had a game-high lead of 27 points, something that went out 28 not long after with Kirksey’s layup matched by Rodger’s long-range bomb just two seconds remaining in the term. The final break had the Jets leading 80-52 and in complete control with the game’s largest margin.

The game was done and dusted by then, with the Jets making the decision to sit both Harris and Samuels out of the contest for the entire quarter in readiness for Thursday night’s semi-finals. To the losing side’s credit, they managed to chew back some of the deficit as the bench players came to the party, though it was always going to be a case of too little, too late, with the Nuggets rotations holding off Manawatu enough to record an impressive 105-80 victory to advance through as the top ranked team in the semi-finals.

The Nuggets were more deadly from the field, with less attempts, but more makes, shooting at 53 per cent efficiency compared to the Jets’ 38, including a 66 to 52 per cent differential from inside the arc. Whilst the Jets had more steals (11-6), the Nuggets recorded the only four blocks of the game, as well as dominating the rebounds (52-39) and winning the assists battle (26-60). Both teams had 15 turnovers in what was a fairly solid performance, but the class of the Nuggets and the loss of Vodanovich proved key in the end.

Hunt top scored in the match with a remarkable 23 points off less than 18 minutes, including 10 of 14 from the floor. Keil stepped up with the most minutes of any player – 27 – just missing out on a double-double with nine points and 12 rebounds. With just 20 minutes, Ngatai still recorded 11 points, nine rebounds and six assists, which equates to a triple-double if you factor in 40-minute averages, while Kenny spent more time on the bench than on the court, for eight points, five rebounds, three assists and two steals. Andrew off the bench amassed 16 points and three rebounds in a really handy performance.

The next matches for both sides are uncertain at this stage, with the elimination finals tonight to determine the winners. If favourites win, then the Nuggets will look to take on Taranaki Mountainairs, while the Manawatu Jets face Auckland Huskies, though nothing can be certain with both Franklin Bulls and Canterbury Rams both in contention.