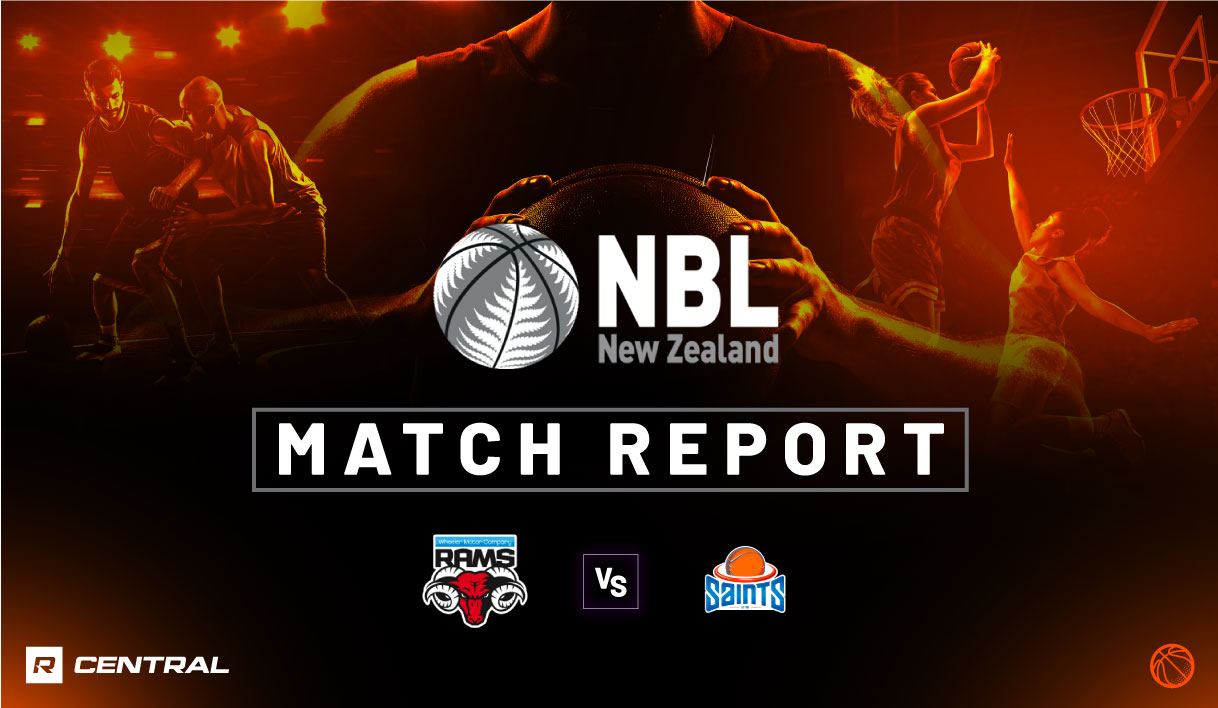 AN UNDERSTRENGTH Canterbury Rams have rolled past a struggling Wellington Saints outfit in the New Zealand National Basketball League (NZNBL) despite a dominant triple-double debut from star Saints inclusion Xavier Cooks. The Saints had finally cracked through for their first win of the season last round, while the Rams sat at 4-3 in the middle of the table. Though Canterbury was missing a host of star talents, the Rams still emerged victorious by seven points, 90-83.

Canterbury Rams were missing a trio of talents for the clash, with both Matur Maker and Joe Cook-Green, and Ryan Taylor out due to illness. Though they were missing those talent, the likes of Taylor Britt, Sunday Dech and Max Darling were ready to step up to the plate. Cooks was making his debut having crossed from the Sydney Kings in a bid to provide a spark to the Saints, who despite having an outstanding list on paper, had hardly fired a shot this season.

It was the strongest Saints starting five of the year, with Cooks joining past Most Valuable Player (MVP) winner Tom Vodanovich, alongside Jordan Ngatai, Taane Samuel and import Michael Smith. The inclusions seemed to make a difference early, as they raced out to a 10-4 lead. The Rams pegged them back throughout the quarter, with the visitors only holding a two-point advantage at the first break.

Canterbury came out firing with Britt, Dech and Sam Smith scoring the first nine points of the quarter to blow the Rams out to a seven-point lead. Long-range shooting was becoming a sight to behold, with both teams trading triples, with the next seven successful shots draining from long-range. The Rams got out to as much as a nine-point lead with three minutes on the clock, before the Saints clawed their way back to just a three-point deficit (40-43) at half-time.

It did not take long after the main break for the Saints to get into gear, as Vodanovich and Smith quickly combined for the Saints to hit the front. They traded leads, with Samuel and Ken Tuffin scoring late for the Saints to be up by four at the final change. A quick-fire five points for the Saints in the opening minute suddenly had Wellington up by nine and looking like carrying the momentum into the final nine minutes. The Rams did manage to get back into it and stem the momentum and then the teams traded blows. A run of seven straight points to put the Rams up by nine in the final minute was enough to get them home, as they held off the Saints to record a 90-83 victory.

Wellington Saints will next face Taranaki Airs on Sunday, whilst the Canterbury Rams will not play again until the following Sunday, June 12, when they take on Franklin Bulls.