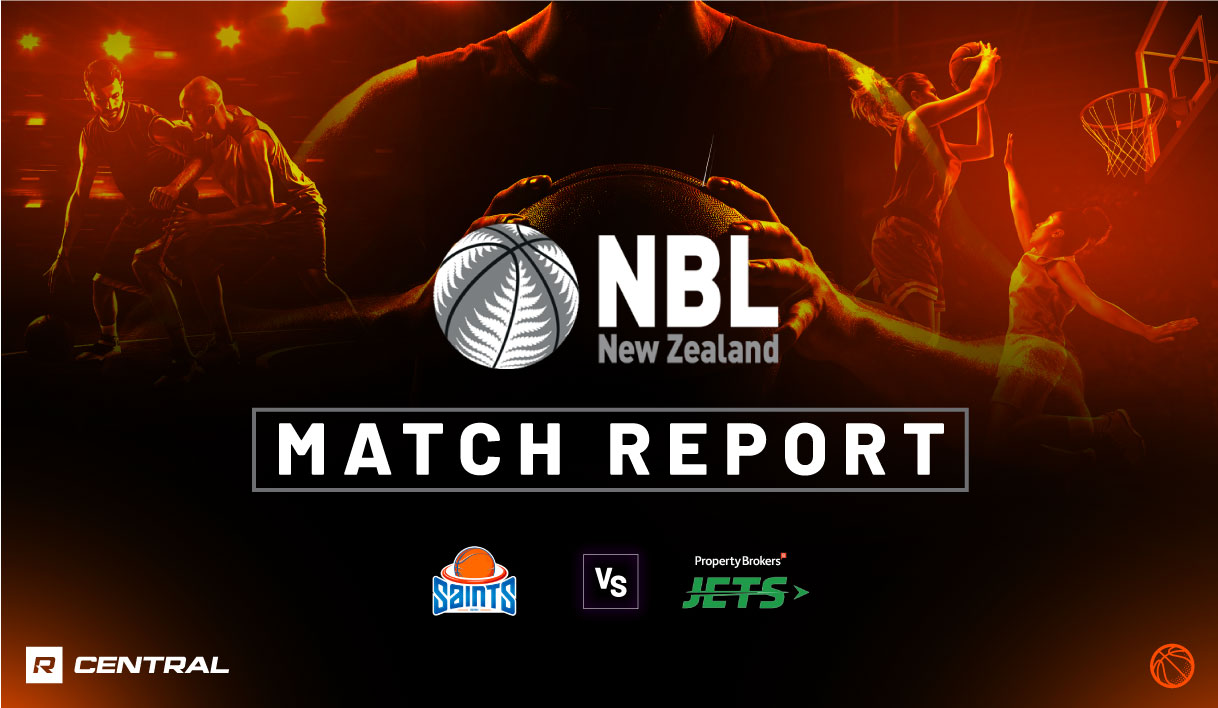 WITH both sides heading into the Round 5 New Zealand National Basketball League (NZNBL) clash boasting 0-4 records, something had to give between Wellington Saints and Manawatu Jets. It was the Jets coming away with a hard-fought nine-point victory to finally kick-start their title defence with a win at TSB Bank Arena yesterday. The Saints raced out to a dominant 16-point lead at the final break, but the Jets roared to life in the final term to come within four points, before the Saints settled to secure the 97-88 win.

After a lacklustre start to their title defence with a lineup that had plenty of ins and outs over the first month, the Wellington Saints got the band together and were in control for most of the game. They raced out to a nine-point lead at the first break, piling on 31 points to 22, and only conceding the lead once. After that, they never looked like losing over the first half, as they kept it in the double digits for the most part, holding a 15-point buffer at half-time.

Though the Manawatu Jets put up a fight in the third term to keep the margin from getting too much further out, the low-scoring term still saw the Saints put on 13 points to 12 and lead 70-54 at the final break. With the game seemingly in the bag, the defences of both sides dropped off, as a whopping 61 points was scored in the last erm, and the Jets came back from the brink to piled on 29 points to 17 in the first seven and a half minutes to suddenly be within reaching distance.

Luckily for the home fans, they would not leave unhappy, as Tom Vodanovich drained a triple with two and a half minutes on the clock, and Ken Tuffin would follow suit, responding the long-range jumper from Jets’ Robert Crawford with 94 seconds on the clock. Successful free throws from import Michael Smith would seal the deal for the Saints, with a late layup to Crawford cutting the deficit back to nine at the final buzzer.

Wellington Saints were deadly from inside the arc, shooting at 63 per cent, though their long-range efforts were not as accurate, only nailing 12 of 40 compared to the Jets’ 13 of 32. They were brilliant at ball-handling with 12 steals to two, whilst also only committing five turnovers for the match. By comparison the Jets had 16, which allowed the Saints to score a massive 23-2 points from turnovers. They also piled on 48 points to 40 in the paint, despite losing the rebound count (39-45) and assist count (19-25).

Crawford was impressive with 23 points – albeit at just 34 per cent from the field – nailing five triples as well as six rebounds and six assists in the clash. John Bohannon came in to score 16 points and 16 rebounds, as well as help himself to six assists in an enormous effort to be the Jets’ best, while Shane Temara came off the bench for 21 points, five rebounds and three assists. Zane Najdawi hit 12 points, eight rebounds and two blocks in the loss.

Wellington Saints take on Canterbury Rams next on June 3, with the Manawatu Jets locking horns with Franklin Bulls on June 5.