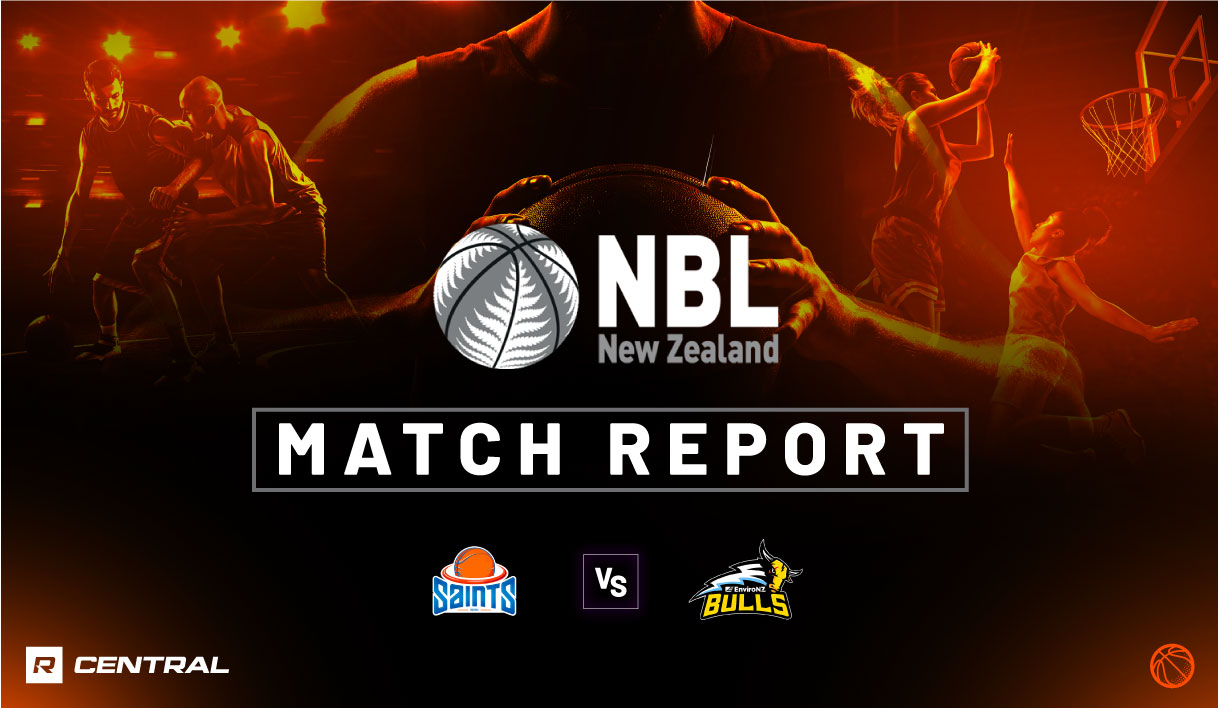 A RARE mid-season coaching change has paid dividends in a first-up performance with Wellington Saints incumbent Troy McLean leading his side to a 28-point win over Franklin Bulls in the New Zealand National Basketball League (NNZBL) yesterday. Anchored to the bottom of the table with just three wins for the season under previous coach Guy Molloy, the Saints opted to release Molly and allow assistant coach McLean take the reigns of what should be a title contender. In his first game as coach, he guided the Saints to a comfortable 101-73 victory at TSB Arena.

Wellington Saints came into the game under new management, and the determination to refocus and get back on track before their 2022 season derailed. Heading in with a 3-7 record, they were facing an up-and-down Franklin Bulls unit that had managed a 5-4 start to the year. Both sides were even in the first quarter as they scored 21 points apiece to be level at quarter time. It was not long before the Wellington aints of old started to get cooking. Michael Smith and Taane Samuel scored the first seven points of the second quarter, with Tom Vodanovich and Xavier Cooks drained threes. In the blink of an eye, the margin was out to nine points two and a half minutes into the quarter.

A three-pointer from Bulls veteran Leon Henry tried to chew into the deficit, with Nathanial Potts also tasting success from long-range, but Smith was on fire for the home side. Corey Webster hit an important jumper in the final two minutes, but the depth of the Saints came to the fore with not only Smith, but Vodanovich and then Ken Tuffin scoring to blow the lead out to 15 point at the main break. With Smith and Cooks on a tear early in the third, the margin only continued to grow, and then the likes of Jordan Ngatai and Francis Mulvihill were troubling the scorers. Webster did his best for the Bull, but the lead hit as much as 31 points in the final 12 seconds before a Potts triple cut it back to 28.

Both sides scored 23 points apiece in the final term, with the Bulls through Potts and Webster cutting it back to 17 points with four and a half minutes left, before the Saints scored 16 of the last 21 points to run away with the win to the tune of 28 points, 101-73. Wellington dominated the stats sheet, shooting at 54 per cent from the field, including 68 and 37 per cent from two and three-point range respectively. Comparatively, the Bulls struggled with efficiency, only scoring at a 36 per cent clip, as well as 47 and 24 per cent from inside and outside the arc. The Saints had 14 more rebounds (47-33), 12 more assists (21-9) and 20 more points in the paint (46-26) in dominant areas.

Cooks and Vodanovich combined for 40 points and 26 rebounds in double-double efforts. Cooks had 22 points – sourcing largely from getting to the free-throw line – as well as 11 rebounds, seven assists and five steals, while Vodanovich managed 18 points, 15 rebounds and three assists. Smith drained 21 points – four of six from three-point range – seven assists and three rebounds, while Samuel (14 points, three rebounds and two assists) and Ngatai (11 points, five rebounds) completed the starting five. For the Bulls, it was a two-person shooting display as Webster (29 points, six rebounds, four assists and two steals) put on a show alongside Potts (24 points, six rebounds, two assists and two steals. Henry (10 points, six rebounds) was the other key scorer, but the rest of the team combined for 10 points.

Franklin Bulls will look to bounce back next Saturday against Canterbury Rams in Round 10, while Wellington Saints take on Taranaki Mountainairs.