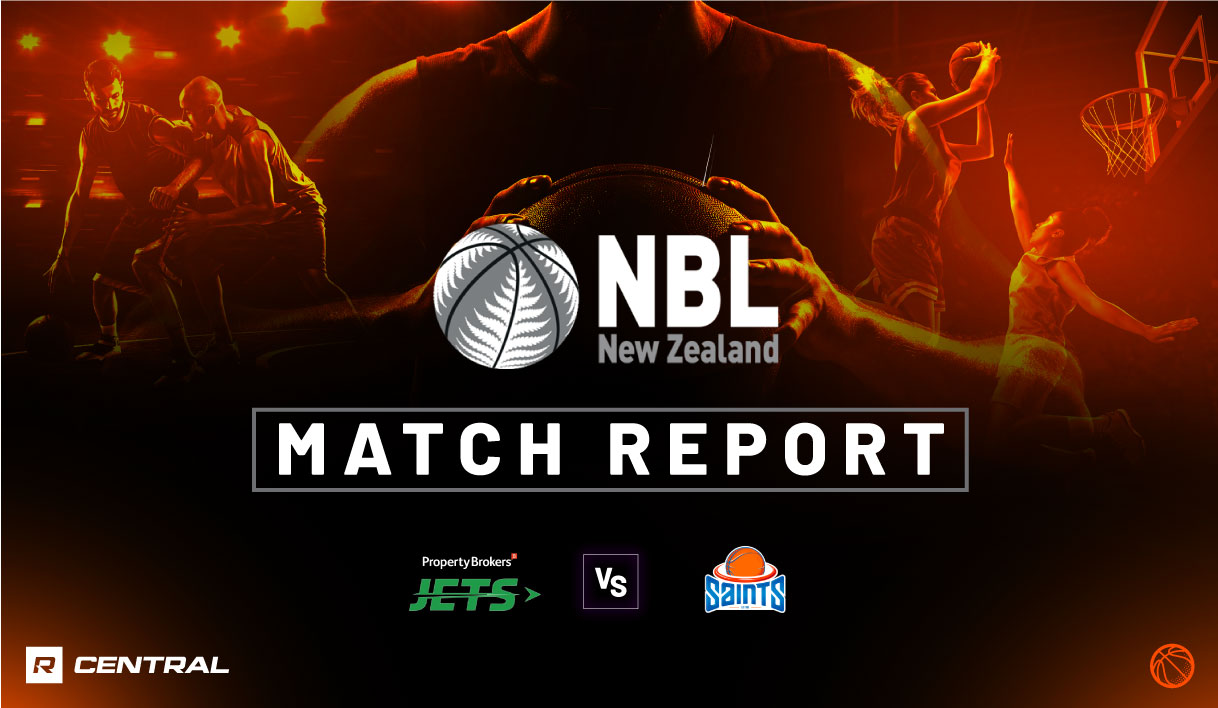 LOOKING the most dominant team in the New Zealand National Basketball League (NZNBL), Wellington Saints have stormed to a massive 39-point victory against Manawatu Jets to continue their remarkable revival in the 2022 season. The reigning premiers started the season at 1-5, then were still on the ropes at 3-7, but have found a way to storm to 8-8 after 16 matches, winning five of their past six outings, all of which saw them pile on 100-plus points. The latest victory over the Jets was no different, with the Saints scoring 109-70 to come away with the massive victory at The Ballroom.

It was an emotional night for the Manawatu Jets faithful who retired Jake McKinlay‘s number 12 jumper pregame in tribute to the 20-year-old was tragically killed in a car accident in December last year. Unfortunately for the home fans, it would be the red-hot Wellington Saints who got off to a flyer, piling on 32 points to four in one of the most dominant quarters. Manawatu was its own worst enemy hitting just two of 22 from the field and missing all 10 triple attempts, while the Saints shared the load around to build the 28-point lead.

While Manawatu did manage to adjust in the second term, the Saints offence remained potent, and the visitors continued to have the foot down to ensure they increased the lead out to a massive 37 points at half-time following the 29-20 quarter. The dominance of Tom Vodanovich and Xavier Cooks off teh boards, coupled with the work of Rangimarie Dougall-Mita and Ken Tuffin off the bench had effectively won the game for the Saints who were able to ensure no one played more than 25 minutes for the match in an even rotation.

The Jets did manage to stem the bleeding in the second half, only losing each of the last two quarters by a point, but the damage was done. Though Manawatu avoided the final margin going beyond 40 points, it still sat at 39, 70-109. Three players scored more than 10 points, with Nathaniel Salmon‘s contribution off the bench the highlight, but ultimately not enough. The Saints shot at 52 per cent from the field, including 52 per cent from inside the arc and 47 per cent – 20 of 42 – from outside it. They also dominated the assists (24-9) and steals (9-3).

Cooks was named Most Valuable Player (MVP) for his 16 points – at 83 per cent from the field – seven rebounds and five assists without a turnover, while Vodanovich put up a double-double of 20 points and 10 rebounds, including four of nine from long-range. Tuffin (20 points, four rebounds and two steals), Dougall-Mita (18 points, two rebounds) and Taane Samuel (12 points – four of five from long-range – four rebounds, two assists and two steals) were the others to impact heavily on the scoreboard. Salmon scored a team-high 13 points for the Jets, also picking up five rebounds in the loss. Shane Temara 12 points, nine rebounds and two blocks) and John Bohannon (seven points, 10 rebounds and two assists) also tried hard.

Manawatu Jets will have a week’s break before taking on Hawke’s Bay Hawks next Sunday, while the Wellington Saints continued their campaign towards the Final 6 with a huge clash against ladder leaders Nelson Giants on August 2.