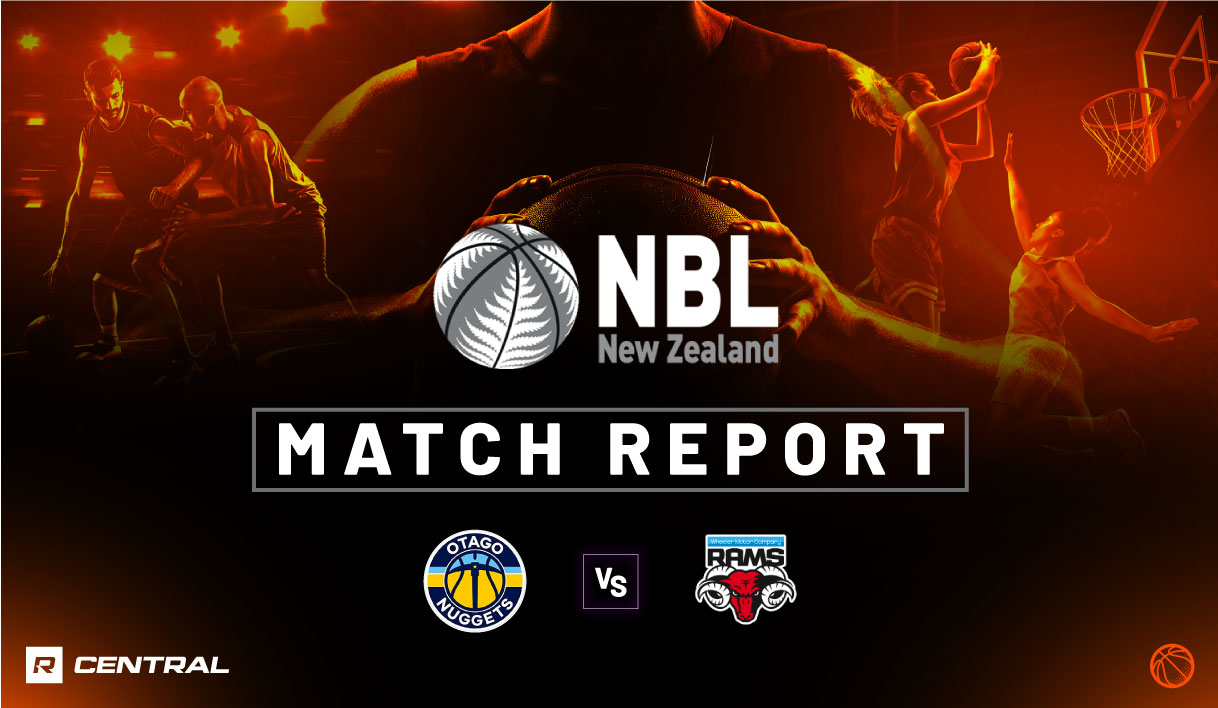 A DOMINANT second term was the catalyst for Canterbury Rams to produce an 11-point victory over Otago Nuggets in last night’s New Zealand National Basketball League (NZNBL) contest. The Rams trailed at quarter time, but soon took control, then survived a late comeback from the Nuggets during the 88-77 victory at the Edgar Centre in Otago.

In a game billed as one to watch, the 6-4 Otago Nuggets hosted the 5-5 Canterbury Rams in a classic mid-table clash. The Nuggets got out of the blocks early after the teams traded blows, with the Rams leading by as much as five points in the first term. A late flurry in the fist term saw the Nuggets take the lead themselves and score the last 11 points of the term. Imports Keith Williams (seven points) and Todd Withers (six) were particularly influential as the Nuggets went out to a seven-point lead at the first change.

That changed in the second term as the Rams quickly made up the deficit with Walter Brown and Matthew Moyer combining for 18 points in the quarter, turning the game around to hold a double-digit lead at half-time. Through the work of Billy Boyd III, the Nuggets did close the gap to seven points at the six-minute mark, but the next eight points went the way of the Rams and the lead went out to a match-high 15 points. Larry Austin had been particularly busy for the Rams, with Sunday Dech popping up for some crucial shots. A late Moyer dunk made the three quarter time score 65-49.

Withers and Williams looked to get to work early for the Nuggets to dig into the deficit, with Taylor Britt and Austin getting on the board for the Rams. With three minutes on the clock, the work of Boyd, Williams and Sam Timmins had trimmed the deficit into single digits, and as low as six points when Withers capitalised on the And-One chance with 67 seconds on the clock. But despite the Nuggets best efforts, a couple of missed shots in the final 30 seconds, and some cool, calm and collected shooting from Dech sealed the win for the Rams. A three-point buzzer beater from the Adelaide 36ers big man put an exclamation mark on the win.

Canterbury Rams were far more effective at shooting the rock, recording a shooting efficiency of 45 per cent to the Otago Nuggets’ 36 per cent. They nailed 10 of 26 from beyond the arc, as the Nuggets were woeful with just three from 28. The Rams also recorded more rebounds (49-44), second chance points (16-14) and points from turnovers (20-18) despite having more turnovers (18-13). The Nuggets were unable to capitalise off those chances, but did record more steals (14-8), blocks (6-3) and points in the paint (40-38).

Dech picked up the Most Valuable Player (MVP) for his 23 points – including four of 10 from long-range – 11 rebounds, five assists and three steals in 37 minutes of action. He was well supported by Max Darling (19 points, eight rebounds) and Brown (14 points, seven rebounds), while Austin (10 points, six assists, five rebounds and two steals) and Moyer (10 points, seven rebounds) also had strong contributions. Williams amassed a game-high 24 points for the Nuggets, as well as three rebounds and two assists, whilst Timmins smashed his way to a double-double of 14 points and 14 rebounds. Boyd (13 points, four steals, three rebounds and three assists) and Withers (13 points, four rebounds, three steals and three blocks) also reached double-figure points.

Canterbury Rams will next hit the court tomorrow, taking on Southland Sharks, while Otago Nuggets take on top of the table Auckland Tuatara on Sunday, July 3.