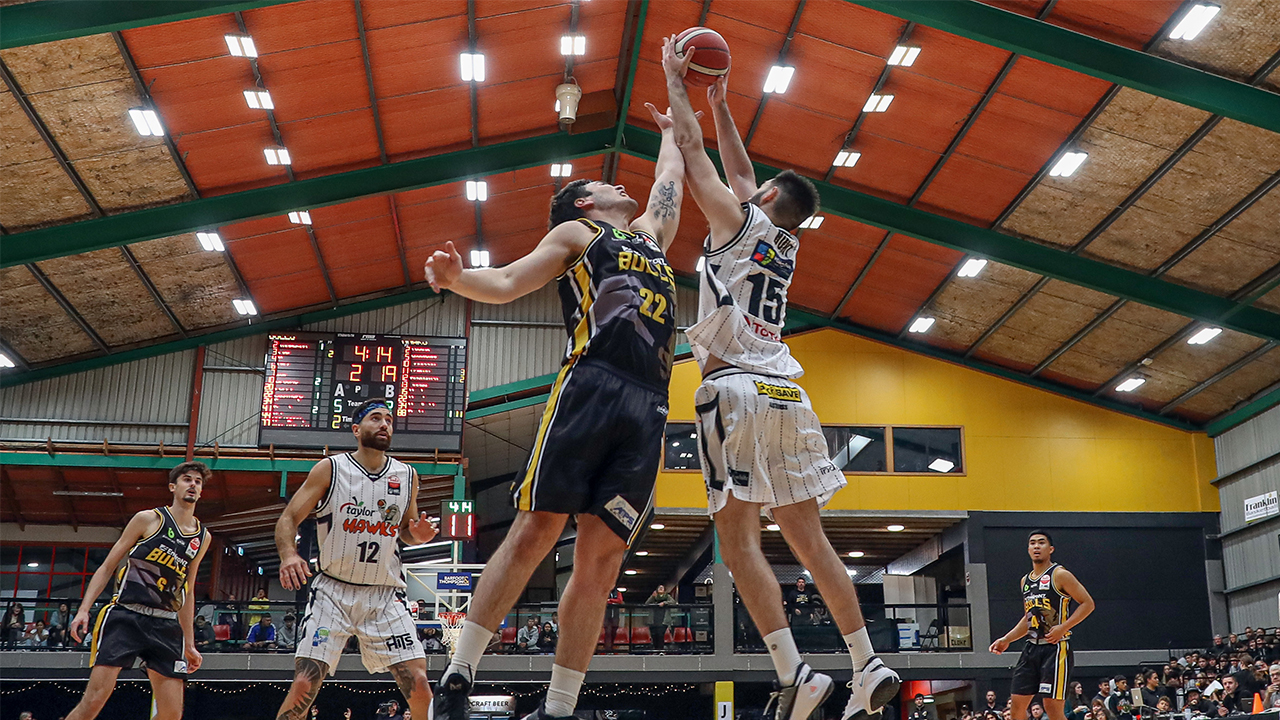 IT was a triple treat of action in the New Zealand National Basketball League (NZNBL) last night, as Southland Sharks became the first side to reach seven wins, downing the previously undefeated Wellington Saints to temporarily take top spot, while Hawkes Bay Hawks and Auckland Huskies both collected wins to remain in the top five. While the Sharks knocked off the Saints by 14 points, Hawkes Bay Hawks smashed Franklin Bulls by 37, and Auckland Huskies easily accounted for Taranaki Mountainairs by 22.

The Sharks came to play at ILT Stadium in front of home fans, proving themselves a title contender by racing out to a four-point lead at quarter time, which grew to 11 points by the main break. Wellington hit back in the third term to cut the deficit back to six with a quarter to play, before a dominant final term in favour of the Sharks (20-12) saw them run away with the 14-point victory, 84-70.

Dom Kelman-Poto racked up a massive double-double of 17 points and 11 rebounds, as well as six assists on the night. Courtney Belger top-scored with 19 points, and had the seven assists, four rebounds and two steals in an all-round effort. Fellow starters, Alonzo Burton (15 points, five assists and five steals), Josh Cunningham (13 points, nine rebounds) and Brayden Inger (14 points, three assists, two rebounds and two steals) all clocked in some serious minutes in the Sharks’ win.

In the biggest win of the night, Hawkes Bay Hawks easily accounted for Franklin Bulls, winning by 37 points on the road, 110-73. The Hawks put the foot down early with a dominant 33-10 first quarter, and whilst the Bulls managed to win the second term by four, were no match for the dominant Hawks, who went on to score 56 points to 38 in the second half, and consolidate a top three spot with a big win.

Ethan Rusbatch was sensational with a whopping eight of 13 from long-range to help him accumulate 27 points, seven rebounds, two steals and two blocks in the victory. Derone Raukawa finished with 14 points, nine rebounds, four assists and two steals, and Jonathan Janssen came off the bench for 18 points and eight rebounds. Others who had no trouble scoring were Rhys Vague (15 points, five rebounds) and Jordan Hunt (15 points, six rebounds), while Devondrick Walker came agonisingly close to a triple-double of nine points, eight rebounds, eight assists and two steals.

In a disappointing night for the Bulls, Denhym Brooke still stood up with 17 points – five of 17 from three-point range – eight rebounds and three assists. Jett Thompson (12 points) and Dylan Wilkie (11) had their fair share of points, whilst Joseph Nunag (nine points, seven rebounds and two assists) and Zachary Easthope (nine points, five rebounds) were both solid in the loss.

In the third game of the night, Auckland Huskies posted a 22-point triumph over Taranaki Mountainairs. The Huskies won the first half by 11 points, to head into the main break with a 53-42 lead. The third term was even, but the visitors stepped it up a gear in the last quarter, pouring on 28 points to 17 to double their lead and win, 106-84.

The quickest turnarounds belong to the Southland Sharks and Wellington Saints who both hit the road to face Otago Nuggets and Canterbury Rams respectively tonight. The Auckland Huskies travel to lock horns with Hawkes Bay Hawks tomorrow, whilst the Franklin Bulls tackle the Manawatu Jets, and the Taranaki Mountainairs face the Nelson Giants on Monday.