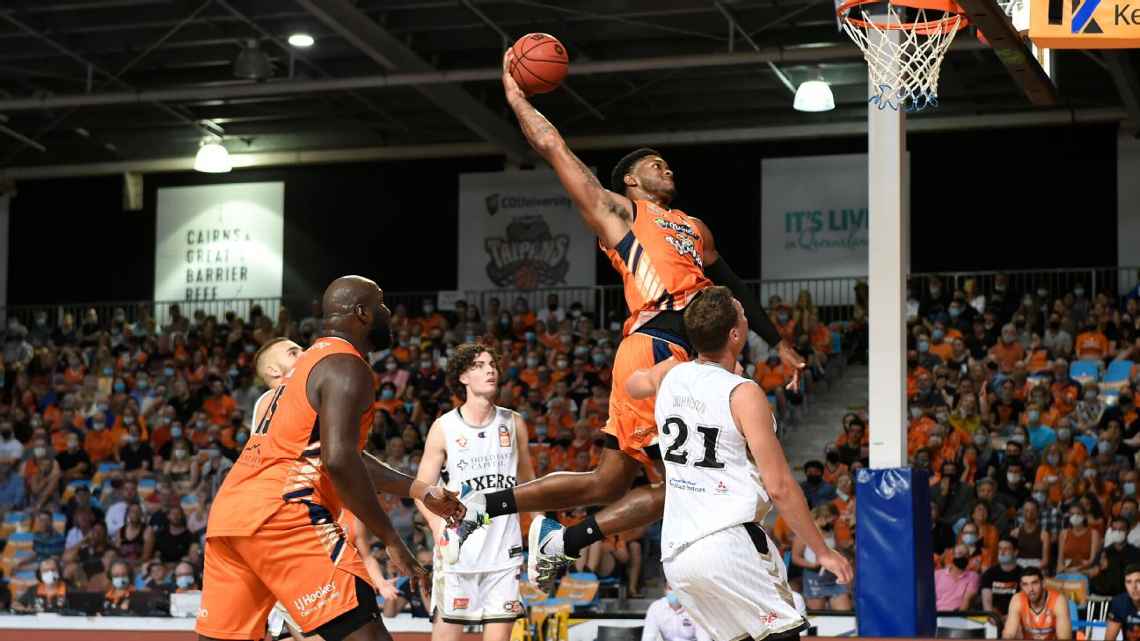 AN inspired and gutsy effort from Cairns Taipans saw them overrun Adelaide 36ers last night to snap a three-game losing streak and steal a narrow three-point victory (91-88). It was a topsy-turvy encounter with the 36ers holding the lead for majority of the game but Cairns working gallantly to change their fortunes.

Both sides were riddled with injuries heading into the clash with a number of key figures sidelined such as Scott Machado for the Taipans and Tony Crocker out for the 36ers. Crocker joined Isaac Humphries on the sideline but that did not seem to faze Adelaide who got off to a hot start, shooting the ball with confidence and relative accuracy to skip out to an early lead. Although scores were level at nine points apiece midway through the term, Adelaide kicked it up a gear to create some much needed separation thanks to the services of Daniel Johnson who well and truly had his radar on. Adelaide capitalised on their opponents inaccuracy as they put down 26 points to 17.

Holding a nine-point margin at the first change the 36ers looked to extend their margin and edge one step closer to a much needed win. Spearheaded by Jack McVeigh the 36ers continued their merry way, with not only the scoreboard increasing but so too McVeigh’s tally with the guard racking up 12 points before half time. However the brakes were quickly put on as the Taipans came out refreshed and raring to go. Hunting down the 16-point lead, Cairns toiled exceptionally hard to quell the offensive play of Adelaide and apply pressure of their own largely due to Cameron Oliver who was proving to be a menace off the boards. Sinking eight points straight the home side ate into the deficit and continued to build momentum with the likes of Mojave King also finding his feet and the basket.

It was a two-point ball-game at half time, with the Taipans sensing a chance to strike and push ahead of their opponents. The intensity lifted a notch with neither side willing to relinquish the ball or the lead as Adelaide put in the hard yards to extend their margin. but Cairns proved to be up to the fight, combatting everything that was thrown at them and rising to the occasion. Producing 21 points to 20, the Snakes managed to dwindle the margin to a mere point at the final change setting up an action packed final stanza.

Having held onto the lead for majority of the game, the 36ers simply ran out of legs in the last quarter while the Taipans found a way to win. Digging deep and heavily undermanned, Cairns showed nothing but grit and determination in the last quarter to not only hold on but to overcome a deficit. It was a frantic finish to the game with the Taipans establishing a seven point lead with a tick under a minute left to play, but the lead disappearing before their eyes as the clock ticked down. Huge plays from Sunday Dech and McVeigh’s ability to convert from the foul line saw Adelaide get back within just one with 13 seconds left and while Josh Giddey had a chance to level things his shot was off, gifting the Taipans a hard fought win.

It was a heart in your mouth finish to the game with a number of key cogs stepping up to the plate and leading the way for their respective sides given the calibre of missing players. Oliver had a game to remember for Cairns producing a scintillating 25 points and 17 rebounds with 16 of them defensive while Jordan Ngatai made his presence felt thanks to his 15 points. King upped the ante this match recording 14 points, five rebounds and one block as teammate Jarrod Kenny got busy on the assist front with seven to his name. Both Nate Jawai and Tad Dufelmeier produced strong performances with 13 points for Jawai and 12 points and eight rebounds for Dufelmeier.

Johnson was once again the go-to man for the 36ers racking up 22 points and four rebounds in his 34 minutes on court. McVeigh had a break out game producing an impressive 22 points at 52 per cent from the field while also racking up four rebounds, all of which were defensive. Brandon Paul was the only other player to reach double-digits thanks to his 18 points as he also collected six rebounds and two assists. Giddey fell short of a double amassing eight points, nine rebounds and seven assists as Dech registered seven points and seven rebounds.