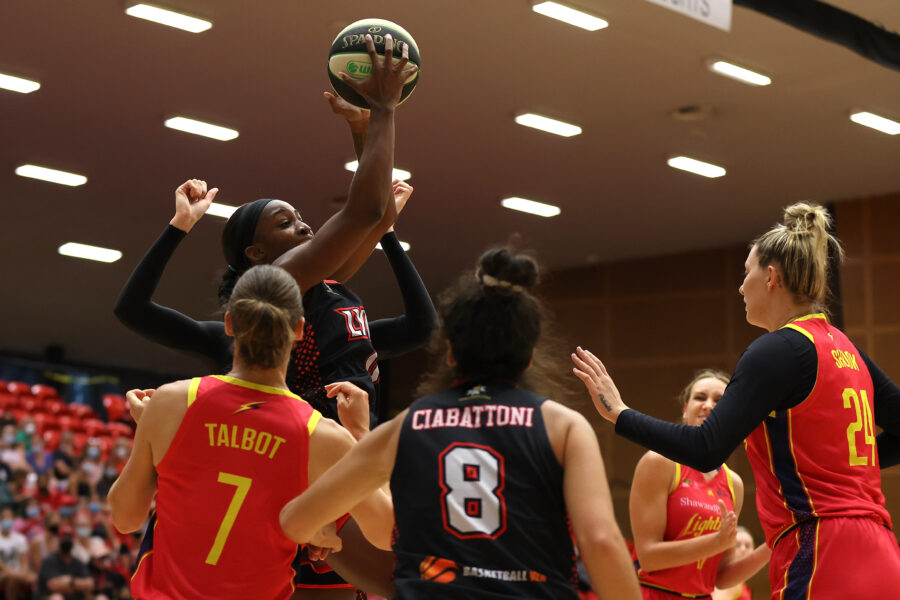 THE next round of Women’s National Basketball League (WNBL) action is here, and despite a different looking schedule, there are still plenty of exciting matches to look forward to. The round actually kicked off on Monday night, with the Perth Lynx claiming a blowout win over the Adelaide Lightning, just one day after Round 13 concluded. This same matchup will resume the round tonight, with the two teams facing off for the second time in two days.

As mentioned above, the action resumes on Wednesday night, when the Perth Lynx host the Adelaide Lightning in a rematch of Monday night’s clash at Bendat Basketball Centre.

The Lynx claimed a big victory when these two sides faced off on Monday, storming home to claim a 25-point triumph and secure their spot atop the standings. It was a statement win from the WA-based side as they convincingly took down one of their fellow contenders, and produced an outstanding offensive performance. They will be hopeful of repeating this feat this time around, but should expect a bit more defensive work from Adelaide. Look for Jackie Young to be heavily involved once again, given the guard dropped an excellent stat line of 30 points, seven rebounds and six assists in the last outing.

Adelaide will be looking to bounce back following their disappointing outing a couple of days ago. They could not get the job done on either end of the court, as the Lynx had their way for all four quarters. The most glaring hole in their game that night was their work on the defensive end of the court, and they will need to seriously improve this if they are to turn things around this time, given they conceded over 100 points. Alanna Smith has been in solid form of late, and should be one of the main contributors for the Lightning.

The next match on the agenda for Round 14 is the clash between the Southside Flyers and the Sydney Uni Flames at Dandenong Stadium on Thursday night, with both sides desperate for a win with just two weeks remaining.

The Flyers have been far from the championship-winning team we saw last year, which was expected slightly given the loss of some seriously talented personnel. They have dropped to second-last in the standings, and have ruled themselves out of making finals with just three wins from 14 games. However, this week presents an opportunity to bounce back on the eve of the final round, as they take on the only side below them. Despite two tough losses, Sara Blicavs produced a pair of impressive outings last round, and should be amongst the action once again.

The Flames stunned everyone in Round 13, taking down the ladder-leading Perth Lynx in style from bottom spot in the standings. This would have given the side plenty of confidence moving forward, and despite the fact that they cannot make finals, they would still be pleased with the endeavour and execution of their gameplan. Given this result, they will likely enter this matchup as favourites, especially if Keely Froling can back up her 30-point, 22-rebound performance.

With the action moving to Saturday now, fans at Bendigo Stadium will be treated to a matchup between the Bendigo Spirit and the Sydney Uni Flames. This will be the Flames’ second matchup of the round.

The Spirit have quietly been on a roll of late, and it was reflected in their Round 13 performance, where they claimed two wins from two games. While both games were decided by eight points or less, it was Bendigo’s ability to perform in the clutch that ultimately got them over the line. As expected, Anneli Maley was terrific in both matches, and will be a focal point of the team’s ball movement once again.

The second match in Saturday’s triple-header will see the Southside Flyers travel north to take on the Townsville Fire at Townsville Stadium. This will be Southside’s second clash of Round 14.

The Fire will be looking to snap their four-game losing streak when they take on the Flyers as they look to regain some of their early-season form. They have dropped out of contention for the top-four in this time, and will now be looking to finish their season on a high. That task starts in this matchup, as they take on a Flyers side that have also been out of form of late Courtney Woods delivered one of her strongest performances last weekend, and will be looking to build on that in this matchup.

In the most anticipated matchup of the round, the top-two sides in the competition will go head-to-head at Bendat Basketball Centre, when the Perth Lynx play host to the UC Capitals on Saturday night. This will be Perth’s third game of the round.

The Capitals have cemented their spot in the upcoming finals series, and emphasised this with a big triumph last weekend. They defeated the Flyers by a whopping 42 points, in one of the most impressive wins we have seen this season. Their opposition is a bit trickier this time around, but they should take plenty of momentum into this matchup. The side had four players score 16+ points, so expect them to share the ball once again this time around, given it is a winning formula.

The final match of Round 14 will see the Melbourne Boomers head across the border to take on the Adelaide Lightning at The Lights Community and Sports Centre on Sunday afternoon. This will be Adelaide’s third outing of the round.

The Boomers have found themselves inside the top-four after 14 rounds of action, with 10 wins and five losses next to their name. This record has been built by some solid team-oriented play that has served them well throughout the season. However, they found themselves on the end of a tough loss to the Spirit to close out last round, so redemption will be on their mind here. They come up against another contender here in what could be a finals preview. Expect point guard Tiffany Mitchell to lead the way once again, after she recorded a double-double in the loss to Bendigo.