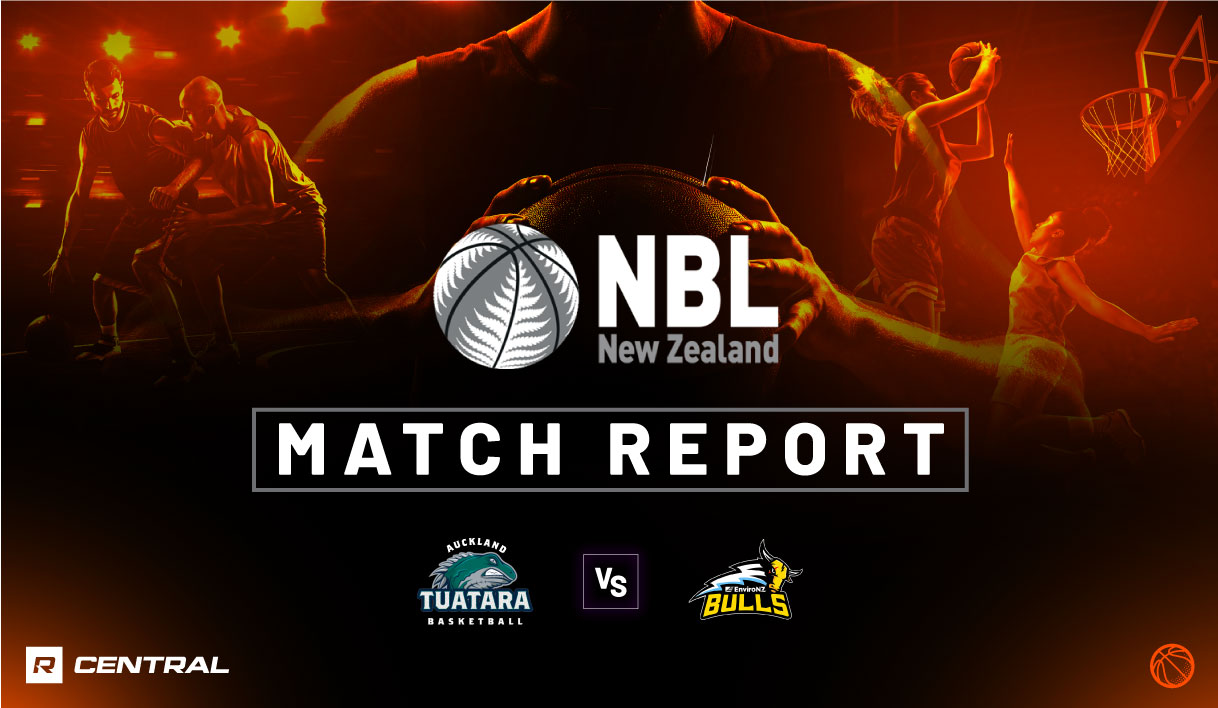 IT was far from easy and took just about all of the match to finally get it done, but Auckland Tuatara racked up another New Zealand National Basketball League (NZNBL) win to regain top spot on the 2022 season ladder. The Tuatara were able to shake off a determined Franklin Bulls outfit who were missing their coach, to win by 12 points, 88-76.

Franklin Bulls headed into the clash without their head coach Morgan Maskell who was sidelined due to Covid protocols, but it did not stop the visitors putting up a fight against the league’s benchmark team this season. The likes of Robert Loe and Chris Johnson were on-song again early for the Tuatara as the home team lead by five points heading into the last 90 seconds of the quarter. A late burst from Isaac Davidson scoring five points – including a last second fadeaway jumper levelled the scores at 22 points apiece.

Auckland got back on top again early in the second, as they piled on the first nine points of the quarter with Daniel Fotu and Takiula Fahrensohn getting busy, while Braydon Iuli‘ triple in response to the Bulls’ first score of the quarter – a hookshot from Anzac Rissetto – extended the margin into double-digits. Bit by bit the Bulls clawed their way back into the contest as Auckland rested some starters, with Leon Henry and Denhym Brooke dangerous from long0range. At one stage the Bulls actually hit the front by three points late, before a Johnson triple levelled the sides at half-time.

Loe and Johnston started the run again for the Tuatara early in the third, as Jayden Bezzant was doing his best for the Bulls. A costly foul on a Fahrensohn triple attempt helped the Tuatara shooter nail all three shots from the charity stripe, and the lead was out to seven points. Brooke hit the next five including a dunk and then a long-range jumper to showcase his versatility, but Fahrensohn and Siler Schneider combined to extend the lead again. Scoring six consecutive points, the Tuatara went out to an 11-point lead at the final break and looked home.

Schneider was running hot in the early stages of the fourth term, and had powered his team to an 18-point lead just two minutes into the final stanza. Henry and Davidson were putting pressure on the opposition to cut it back to 10 heading into the final few minutes, but the consistency of Schneider and Fahrensohn kept the opposition at arms-length. Auckland held on for the memorable 12-point win in what was a valuable victory.

Fahrensohn picked up the most votes in the Most Valuable Player (MVP) award, shooting 20 points – including three of seven from long-range – while recording eight rebounds, two assists and two steals. Schneider (17 points, three rebounds and three assists) and Fotu (10 points, five rebounds) were busy on the scoring front, whilst the bigmen combination of Loe (14 points, nine rebounds and six assists) and Johnson (eight points, 11 rebounds and four assists) did all the damage.

For the Bulls, Henry wound back the clock to scored 19 points, 12 rebounds, three assists, three steals and three blocks to lead the way for the Bulls, while Brooke topscored with 20 points, as well as four rebounds. Davidson (12 points, four rebounds and four assists) and Bezzant (11 points, six assists and two rebounds) were the other major scorers for the Bulls in the loss.

Auckland Tuatara take on Hawke’s Bay Hawks on June 4 in what shapes as a massive top three clash, while the Franklin Bulls will be looking to bounce back against the winless Manawatu Jets on June 5.